After winning several awards and after years of tinkering, Toronto inventor Yi Jiang's DRUMI, a green foot-powered washing machine, is still not ready to be shipped to customers. But one crowdfunding expert says that is to be expected with new ventures like this.

An award-winning idea to build a pedal-powered washing machine has hit some snags and its inventor is facing questions about what's taking so long. But one expert has told CBC Toronto stories like this are common and are even to be expected before a new product finally makes it to store shelves.

Yi Jiang, the creator of the Drumi — an electricity-free, foot-powered washing machine — has experienced many challenges taking his product from mock-up to market.

"It's just taking us so much time and energy to figure out how to make things work," he said.

The prototype won the national James Dyson Award in 2015.

It's a compact washing machine, operated by pedal, that can hold about two kilograms of clothing. That's usually three to five items.

All that is required is water, detergent, sanitizer and a few minutes of your foot pushing the pedal to spin the drum that holds the clothes.

Jiang gained financial support for the concept with pre-orders on the crowdfunding site Indigogo and his company's website. 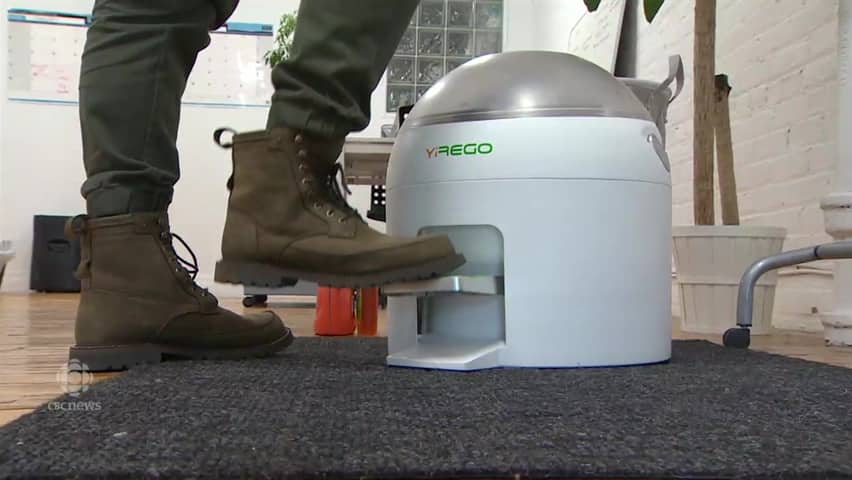 3 years ago
1:01
This inventor has experienced some challenges taking his product from mock-up to market, but he assures his customers the product is coming soon. 1:01

Walter Sanchez says he came across the Drumi while reading an article about inventions that could make a difference in your life.

"I was attracted to that concept of having an item that is easily accessible to me that would make an otherwise tedious task more appealing and more functional and efficient," he said.

In May of 2016 he went on the website for Jiang's company, Yirego, and pre-ordered it for $265 plus tax and shipping.

Sanchez says the website indicated pre-orders would be shipped out by the end of the year but that kept being pushed back.

He says he emailed Yirego last April and was told they did not know when the product would be shipped out and they would keep him informed.

But Sanchez says eventually all communication, including the company's monthly updates on its website came to a halt.

"The product doesn't get delivered and no one is returning your calls and there are no updates, so as a consumer it raises a lot of concern because three hundred and whatever dollars is not chump change for a lot of us," he said.

Jiang says the plan was to have the actual product shipped to customers by 2016 but that deadline has come and gone.

The delay, he says  is partly due to redesigning the Drumi, adding new features and meeting manufacturing standards.

Jiang says because he was creating a whole new product with no electrical parts, off-the-shelf components were not an option.

He even had to design and produce basic parts like the springs the machine needs.

But while his team works on improving the product, customers who pre-ordered are left waiting.

After sending several messages this past spring, Sanchez said the company finally contacted him and provided him with the refund he requested in October.

"The way the situation was handled, I think it was poor," said Sanchez.

Many of the challenges faced by the inventor of the DRUMI and its clients are very common, says Daryl Hatton, the CEO of  FundRazr and the director of the National Crowdfunding Association of Canada.

Hatton says people choosing to get behind products on crowdfunding sites need to fully understand what they are committing to.

"They will have to be patient because it frequently takes longer than they want. There's a chance that they might not ever get it. It's possible that the entrepreneur might fail and it won't work," he said.

"You're backing a venture and a concept and an idea more than just a purchase. There's risk involved," he said.

Hatton said there are things that entrepreneurs like Jiang can do to help ease the concerns of their clients.

"The number one advice is to over communicate and demonstrate the progresses being made," he said.

Jiang says there was a six-month period where the company kept quiet while ensuring its intellectual property was fully protected.

As for production, Jiang said his technical research and development team relocated to China to speed things up with local vendors and suppliers.

The original concept prototype had around 300 to 400 pieces but with the new version Jiang wanted to get it down to about 100 parts.

Where once the Drumi included a plastic drum, the new product is made with stainless steel.

"It's definitely going to last longer plus the nature of this material will reduce the bacteria or residue left. So it's more hygienic," he said.

The structure is also more compact; you can wash about five to seven items of clothing or a pair of jeans.

While the company continues to improve the product Jiang says about 90 per cent of his financial backers have stuck with him.

Although Sanchez chose to get a refund, he says he still believes in the Drumi but he has this message for Jiang.

"What you're doing is admirable and until this day I see the value in your product. However, it is very important to keep your customer happy and all that takes is a bit of communication."

"We're constantly engaged with our backers. We're sort of like trying our best to help them to understand which step were in at this point," he said.

That step is ramping up production in China, which is currently underway.

"It's finally getting there and I'm pretty proud," said Jiang.