Hundreds rally outside Indian consulate in solidarity with protesting farmers

Hundreds of people gathered in front of the Indian consulate in downtown Toronto on Saturday to show their support for farmers in India who are protesting new laws they say will destroy their livelihoods.

Farmers in India say new laws will lead to exploitation, destroy their livelihoods

Hundreds of people gathered in front of the Indian consulate in downtown Toronto on Saturday to show their support for farmers in India who are protesting new laws they say will destroy their livelihoods.

Those who organized at the consulate are Canadians in the Sikh community who say the farmers work tirelessly to feed India and the world — and that the farmers need support now more than ever as their right to peacefully protest has been blocked by police who've used methods like tear gas, batons and water cannons against them.

"Our farmers are the backbone of our nation. This issue has hit close to home ... their lives matter to us, " protester Mansi Kaur said over the sound of dozens of car horns sounding off at the rally.

Kaur gathered with hundreds of others who were wearing masks and holding signs in support of the farmers, with slogans like "Justice for Farmers" and "No Farmers, No Food." Others remained in their cars at the demonstration.

She said she was there with others to protest three new laws in India that they say will see crop prices slashed and farmers exploited by large corporations.

WATCH | Torontonians rally in support of protesting farmers in India 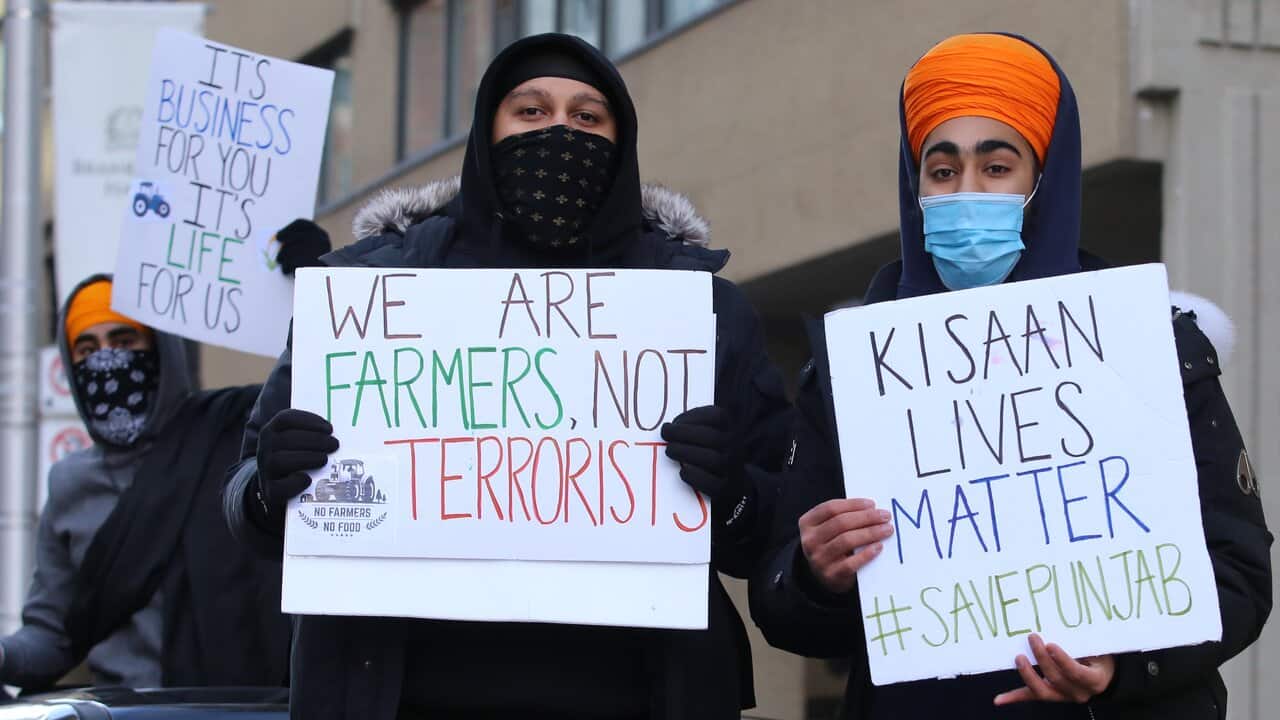 2 months agoVideo
2:03
Hundreds of people gathered in front of the Indian consulate to support farmers in India who are currently protesting against new laws they say will hurt their livelihoods. 2:03

Thousands of farmers in India have been camping out on the outskirts of the capital for the past 10 days until the new agriculture laws are withdrawn. They are heading towards New Delhi as they continue their calls.

Farmers had also been protesting the laws for nearly two months in Punjab and Haryana states.

India's government failed to break a deadlock with farmers on Saturday and will meet again on Wednesday, the agriculture minister and union leaders said.

Farmers have long been considered the heart and soul of India, where agriculture supports more than half of the country's 1.3 billion people, but the farmers have also seen their economic clout diminish over the last three decades.

The Indian government said the purpose of the legislation is to bring reform that will allow farmers to market their produce and boost production through private investment.

Farmers fear the legislation will eventually dismantle India's regulated markets and stop the government from buying wheat and rice at guaranteed prices, leaving them to negotiate with private buyers. The are calling for the government to repeal the laws and retain mandatory government purchases, among other demands.

"It would be like if we went to work, and there was no longer a minimum wage," said Nanki Kaur, who was also at the rally in Toronto. "They feed us. It's up to us to stand up for them."

Solidarity from the Sikh diaspora in Canada

Jaskaran Sandhu, director of administration at the World Sikh Organization of Canada, said the protests happening in India are "historic" and images from the protests have deeply affected those in the Sikh disapora in Canada.

But Sandhu said it's also been inspiring to see the perseverance of the farmers who are continuing to assert their right to peacefully protest, despite the actions from police.

Sandhu added that many of those at the Toronto rally have family that are at the protests in India, including seniors, which has made the situation scary to watch from afar.

"As Canadians, as Sikhs and Punjabis living here in the diaspora, we want to ensure that our people are safe and the right to peaceful protest is protected," Sandhu said, adding that those in the community across Canada are having these same conversations in their households.

Car rallies have also been organized in cities like Vancouver and Ottawa to show solidarity, Sandhu said. Prime Minister Justin Trudeau's comments earlier this week that called the Indian government's response to protesters "concerning" was a large help as well, he said.

Those comments led to a swift reaction from officials in India who said the Trudeau was "ill-informed." Indian Prime Minister Narendra Modi and his ministers have also framed the farmers as "anti-national"— a term the government has long used against its critics.

"We need folks to stand up and speak out so the Indian government knows they're being watched," Sandhu said.

Along with rallying, Sikh communities in Canada have been supporting the protesters in India by sending them supplies to continue their efforts, said Gurpartap Singh Toor, a volunteer with Khalsa Aid Canada.

"There's been an overwhelming amount of support," he said.

The fundraising group is focusing on bolstering the health and safety of the demonstrating farmers, Toor said. Khalsa Aid Canada has sent fire extinguishers — as the farmers are cooking on the ground as they camp out — as well as devices to spray down the campsites to prevent mosquito bites that can sometimes cause illnesses.

Toor said menstruation kits have also been sent due to an "unprecedented" number of women at the protests, along with portable washrooms to provide safe and private spaces for women to use the bathroom. The cold weather at night has also been an issue, so Toor said the organization has sent blankets and shelters for the farmers, particularly for the seniors who are protesting.

"I would say a lot of people from Canada have family that are at the protests right now ... safety is the biggest concern," he said, adding that the fear of continued police violence remains high.

Toor said the farmers have asked him and others to create as much public awareness about the issue as possible. "It brings a lot of global eyes on India, so the government knows if they act with a bad intent, then the world is watching," he said.

With files from Talia Ricci, The Associated Press and Reuters