Racism and vandalism strike the run for city council in Ward 2 where election signs for candidates Munira Abukar and Andray Domise were found defaced. 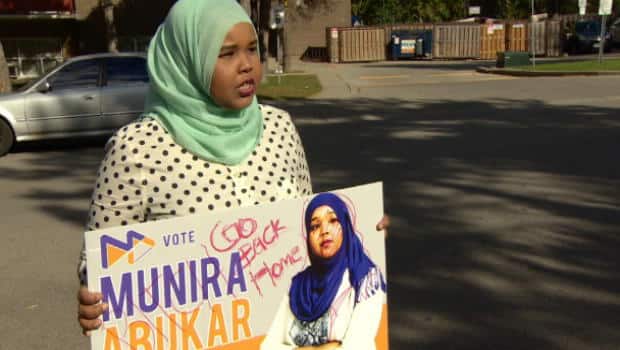 Racism and vandalism struck the run for city council in Ward 2 on Saturday, when election signs for candidate Munira Abukar were found defaced with profanities.

The words "Go back home" were also painted on signs. It is the latest incident of racism and intolerance in the run-up to the Oct. 27 election.

Abukar said it left her disheartened and angry — at first.

"I'll pick the sign up and put ten more where that one was vandalized."

Abukar is one of 14 candidates in Ward 2 looking to replace Doug Ford and is going up against Rob Ford in the election.

Another Ward 2 hopeful, Andray Domise, also had signs damaged. He too vowed to fix them and put more up in their place.

The incident prompted a show of support from many online, including mayoral candidate Olivia Chow.