A video of a raccoon getting inside of a raccoon-resistant green bin in less than 30 seconds is all the proof Toronto needs that this is a raccoons' city — we humans are all just living in it.

Green bins were pitched to Torontonians in 2015 as raccoon-resistant

A video of a raccoon getting inside of a raccoon-resistant green bin in less than 30 seconds is all the proof Toronto needs that this is a raccoons' city — we humans are all just living in it.

Graeme Boyce, who lives in the city's Beach neighborhood on Kingston Road and Queen Street East, filmed the raccoon getting inside of the bin in front of his house, using its nimble paws to expertly turn the handle.

"I thought that's pretty brazen. It's broad daylight, a busy street, and I thought there's no way he can open that bin anyway ... it's raccoon-proof. A few seconds later there he was opening the handle and helping himself to dinner," he said.

Boyce said he had three toboggans stacked on top of the bin and that the raccoon flung them off and onto the driveway to get at the bin.

The ease with which the raccoon performs this task strongly suggests that this is not its first time getting inside the bin.

"What I couldn't  believe is he could actually with his hind legs, hang on the side of the bin, reach down and grab a bag that was way down at the bottom ... quite incredible, I have to say," said Boyce.

"He's obviously done it before and he's quite good at it."

With a tighter lid and a stiffer handle, the green bins were pitched to Torontonians in 2015 as a raccoon-resistant solution to the city's critter problem.

The new bins, manufactured by the Rehrig Pacific Company, focused on increasing size, durability, stability during storms and high winds and locks to keep rodents and raccoons out.

For a moment, it seemed as if the city had won the battle.

However, a couple of years after the rollout of the bins, it quickly became apparent that the raccoons were the ones winning the war. 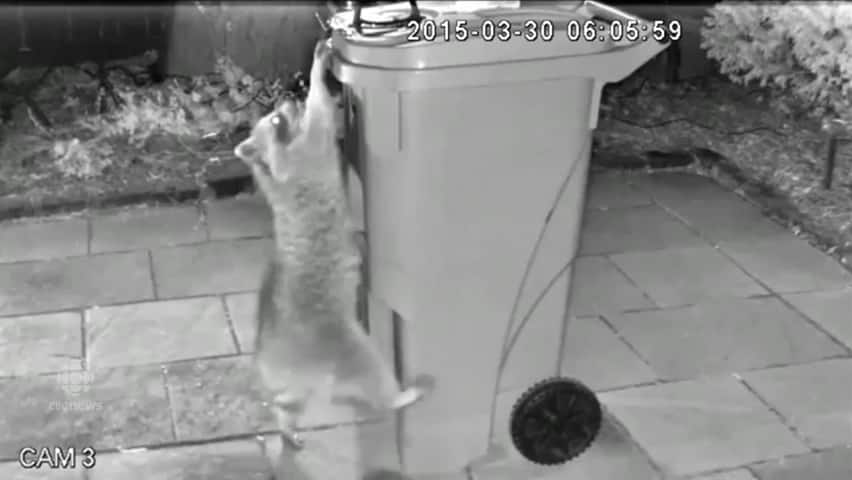 Check out Toronto's latest weapon in the war on 'raccoon nation'

5 years ago
2:04
Toronto's putting its raccoons on a diet as the city begins rolling out new green bins next week that are designed to lock out the perennial compost bandits. 2:04

One Scarborough resident told CBC Toronto that his green bin was knocked over and opened on the first night he put it out.

Despite those concerns, at the time city officials maintained there was no conclusive proof that raccoons can open the new bins.

Thanks to Boyce, now there is.

"We are told that this bin is raccoon-proof ... and here's a raccoon opening it up like its nothing. I was kind of giggling in the background."

The city has previously told CBC Toronto that it investigates each complaint it gets about the green bins and that more often than not, the issue is a faulty bin, such as one where a screw has come loose in the latch.

"He just gave it a good flick of the wrist...and lo and behold, he was in."

Ramna Shahzad is a multi-media producer and reporter in the CBC Toronto newsroom. She began working at CBC News in 2015 as a Joan Donaldson Scholar. Born in Karachi, Pakistan, she now calls Toronto home and writes about everything from transit and city hall to baby animal births at the zoo