A tower-crane operator looked down from his work on a downtown Toronto condo to see a raccoon had climbed up 213 metres on a ladder on Thursday morning.

Animal climbed down shortly after

A tower-crane operator looked down from his work on a downtown Toronto condo to see a raccoon had climbed up 213 metres on a ladder on Thursday morning.

The operator, who tweets under the name @SkyJacked793, noticed the animal on Thursday morning and posted a photo to Twitter.

Raccoons have amazing dexterity and use their front paws to pry things open, turn knobs and handle objects, according to Toronto Animal Services.

The operator tweeted "Wasn't me!" as a caption with the animal looking upward.

Both he and the raccoon were at the L7 condominium tower next to Yonge Street and The Esplanade.

The operator reported the raccoon hissed at him and then climbed down, somewhat awkwardly, down the side of the crane. 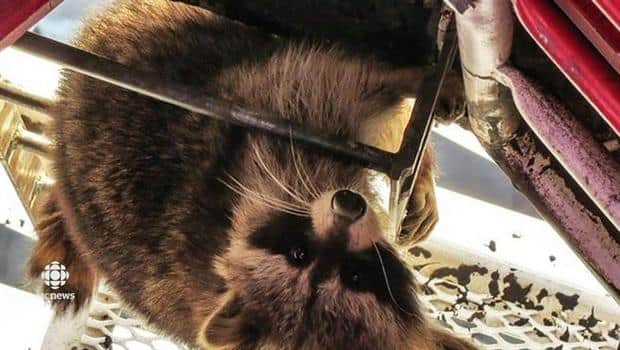 John Tory on the climbing raccoon