Vilma Filici has a raccoon family living under the backyard deck of her Lawrence Avenue West and Bathurst Street home. She’s one of many Torontonians learning to share space with wildlife.

How Torontonians live with their animal neighbours 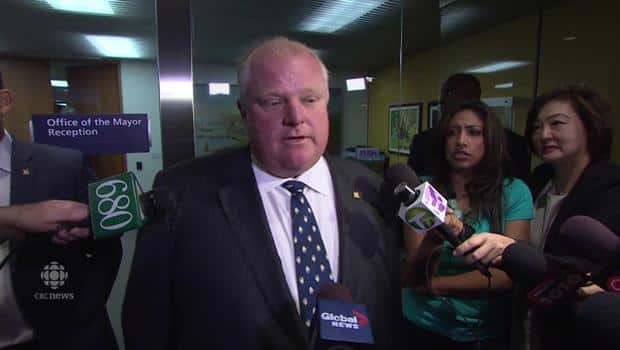 7 years ago
2:43
The mayor answered a question today about raccoons in the city. 2:43

Vilma Filici has a raccoon family living under the backyard deck of her Lawrence Avenue West and Bathurst Street home. She’s one of many Torontonians learning to share space with wildlife.

“I love raccoons. If I could have one as a pet I would,” said Filici who has been feeding the raccoons in her backyard for the past five years.

“Once I gave them cat food, they started showing up at the door to the backyard regularly,” said Filici.

She said feeding the raccoons has meant that her garbage and compost bins have been left alone.

At one point, her backyard was home to five raccoons. Since last fall, the group has dwindled to three. Filici said they come around in the fall when their food supply is a bit more scarce, but disappear in the summer.

“Our street is divided between people who don’t mind them, people who trap them and people who hate them because they destroy their gardens,” said Dick.

Dick hasn't noticed an increase in the raccoon population since she moved into her house 10 years ago. However she said there’s one raccoon who has been getting bolder when it comes to approaching people.

The lactating female raccoon has been showing up regularly at Dick’s back door in search of food, forcing the family to invest in a new screen door.

“We spent a couple of hundred bucks on the door,” said Dick, adding that she "would never hurt them.”

Others in the neighbourhood are taking a different approach.

“We have one neighbour who throws old batteries at the raccoons, sprays the babies with a hose and has fortified his garden with flags, streamers and scarecrows to keep them out,” said Dick.

She thinks his efforts are in vain.

“I don't think they’ll ever go away,” she said.

For Jesse Ship the raccoons wandering the city mean a chance to get up close and personal with wildlife.  He fondly recalls the summer night after his class when he met a raccoon mom and her two babies in Queen’s Park.

He cautiously approached the animals and offered them some snacks. The playful baby raccoons warmed up to him right away.

“It was amazing for me,” said Ship. “She was just like a human mother supervising while I played with her kids.”

Raccoons should run off screaming

Nathalie Karvonen the executive director of the Toronto Wildlife Centre said there’s no evidence that the wildlife population in this city has grown.

“We do get a lot more calls at this time of year,” she said. “That’s because the babies are growing and some of them are as big as the adults and sometimes they’re indistinguishable.”

Karvonen said people assume the population has exploded, but most likely things will change in a few months when the babies are older and the mother kicks them out of her territory.

The Toronto Wildlife Centre gets approximately 30,000 calls a year from people dealing with more than 300 species. Karvonen said this makes them the busiest wildlife hotline in the country.

In fact they have received so many calls from Torontonians seeking help on how to deal with animals in the past 21 years that they have created a 500-page manual to educate other wildlife centres.

Karvonen said many of the concerns that people have can be boiled down to one key issue.

She said the best way to lower the population of wildlife in our city is to cut off their food source, that means not feeding the animals intentionally or unintentionally by giving them access to green bins and dumpsters.

The normal reaction that a raccoon should have to a human is for them to go “run off screaming,” said Karvonen.

Filici said she learned one important lesson from her raccoon neighbours.

As she got more comfortable with the raccoons she started feeding them from hand. For the most part the animals would come gently and nibble on the food.

“One day I was eating turkey and gave him a piece of white meat. He took it then grabbed my finger with his little hand and bit me," she said.

Filici said she doesn’t think the baby raccoon meant to bite her, “he was trying to get a bit of meat stuck to my finger.”

Nevertheless, she was rushed to the hospital where she got over a dozen injections including a tetanus shot.

“The one I got right where the bite was, that was really painful,” said Filici.

She had to go back to the hospital to get another four injections after that.

Despite the ordeal, she’s still feeding the raccoons. But these days she doesn’t hand feed them. Instead she leaves the cat food out for them to eat on their own.

Karvonen said that many people living in Toronto have little to no experience with nature and wildlife.  She encourages anyone in need of help to call organizations like theirs that can offer advice and expertise.

She also offers some basic tips that can help preserve wildlife.

1. Do not relocate an animal

It is illegal to relocate most species in the province.  All mammals, reptiles and amphibians — as well as birds that are not migratory, like blue jays and cardinals — fall into this category.  She said moving the animals is futile.

If one animal was attracted to your home or property that means another one will be along shortly unless you remove the source of attraction, like their food supply.

Karvonen suggests that all cats should be watched when they are outside, not only to help save wildlife but also because they are themselves in tremendous danger when unsupervised.