A man is dead and four others are in hospital following a shooting on a bar patio late Monday in central Toronto.

A shooting on a bar patio in central Toronto that left one man dead and four other men injured late Monday night was targeted, police say.

Police received several calls about the sound of gunfire in the area of Queen Street East and Sherbourne Street shortly after 11:17 p.m. A 32-year-old Toronto man died from his injuries in hospital.

Homicide detectives said a lone gunman who entered the Libertarian Public House, at 235 Queen St. E., and opened fire on the patio. 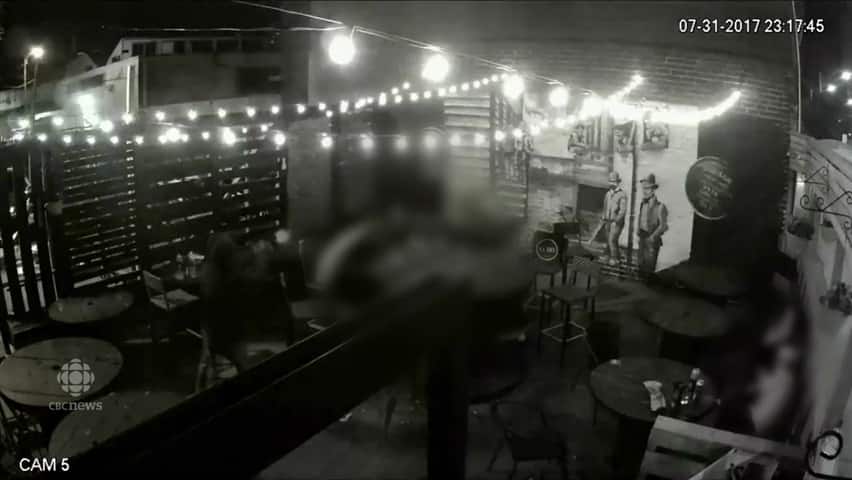 4 years ago
0:08
A man is dead and four others are in hospital following a shooting on a bar patio late Monday in central Toronto 0:08

"We are coming after him," Det.-Sgt. Hank Idsinga, of Toronto police's homicide squad, told reporters on Tuesday. "We are very lucky that we don't have three murder victims here."

In one video clip released by police, the a man walks into and through the bar with his hands in his pockets. He is wearing a mask over his face and a hooded sweatshirt that appears white because of the infrared camera, but police said it is actually black. Police believe the hooded sweatshirt has the brand "Hollister" on the front.

In another video clip, which shows the actual shooting, the man from the first clip is on the patio, the entrance of which is at the back of the bar, and he walks towards a man seated at a table while firing a handgun. Then, he moves closer, stands over him and continues to fire until he runs out of bullets.

Idsinga said the shooter ran through the bar after the shooting and out through a door onto Queen Street East. He was seen by witnesses fleeing eastbound on Queen and getting into a car.

At least five to seven shots were fired, he said.

Idsinga called the shooting brazen and callous. He said stray bullets ricocheted around the patio. Nine people were on the patio at the time of the shooting.

"Innocent people shouldn't be getting struck by bullets when they are simply out having a drink at a local bar," Idsinga said.

The man who was targeted in the shooting was rushed to a hospital, where he was pronounced dead. His next of kin have been notified, but police said his family doesn't want his name released.

Three other men were transported to hospital from the scene, while another man walked into a hospital shortly afterwards, Toronto paramedics said. The injured are believed to be in their early 20s to early 30s, but exact ages were not released.

At least of two or three of them are friends, Idsinga said. Two suffered serious injuries. One remains in hospital in non-life-threatening condition.

"We have five victims in total, including the deceased. Four victims were treated for gunshot wounds at the hospital," he said.

The other victims, all from Toronto, tried to hide during the shooting and are seen on the video scrambling to get out of the way.

Idsinga said police are releasing the video clips in the hopes that members of the public can help police identify and locate a suspect. He said someone might be able to recognize the way the shooter walked or his clothing.

Idsinga said the investigation is in its early stages.

"You certainly get a sense of exactly what happened from the two video clips," he said. "We believe he is definitely targeting one particular victim."

Idsinga said police do not know why the victim was targeted.

No weapon has been found, but police plan to sort through garbage bins collected by a garbage truck near the scene.

No description of the shooter, except for his clothing, has been released. Police also did not release any details about the getaway car.

The area where the shootings occurred continues to be taped off as officers gather evidence.

Mike Trupei, a resident who lives in a building near where the shootings occurred, said he heard seven or eight shots late Monday.

"I heard loud gunfire. I got dressed and I walked downstairs. When I came to this corner, it was like a war zone," he said.

"I used to be a gun collector and I used to live in the United States. It appears to be a .45 [calibre]. It's a different sound from the 9-mm. That aroused my curiosity. I wanted to see what was going on."