Small packets of powder — no bigger than those sugars they give away at your local coffee shop — are today helping millions of children stave off malnutrition and earning applause for the Toronto doctor who developed them. 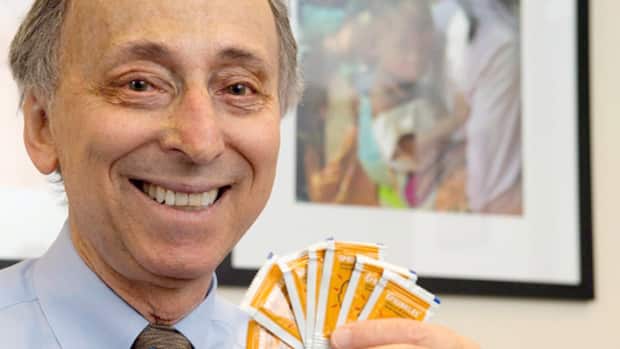 Small packets of powder — no bigger than those sugars they give away at your local coffee shop — are today helping millions of children stave off malnutrition and are earning applause for the Toronto doctor who developed them.

Dr. Stanley Zlotkin, a pediatrician specializing in nutritional science at Sick Kids Hospital, was last week awarded the Order of Ontario for his work on Sprinkles, a nutrient-packed powder that mothers around the world add to baby food to prevent anemia and other ailments.

It was developed over a decade ago at the behest of UNICEF to help the hundreds of millions of children who suffer from iron deficiency, and is now distributed by the UN to more than 60 countries across Africa, Asia and Central and South America.

"The idea came to me that we could potentially fortify food in the home with powdered minerals and vitamins," Zlotkin said Monday on CBC Radio's Metro Morning.

"It's such a simple idea yet, in fact, no one had ever thought of it."

Food in the developing world — such as rice, grains and lentils — is often locally sourced and, though generally healthy, lacks the nutrients that are added to "fortified" store-bought products in Canada and other countries, he said.

Iodine is added to salt, vitamin D is added to milk, for example, staving off nutritional ailments that were once common in Toronto.

"In the 1920s if you came to the Hospital for Sick Children, the majority of the children being admitted had vitamin D deficiency — rickets, a bowing of the legs. We don't see that in Canada anymore and it's because of fortification," Zlotkin said.

Sprinkles are rich in iron, zinc, folic acid and various vitamins. Zlotkin was also asked to set up large-scale manufacturing and distribution that would keep Sprinkles affordable.

The success of Sprinkles has been very satisfying personally, he says, and is in keeping with the research and innovation efforts at SickKids — which sometimes get overlooked amid the hospital's more obvious work treating the sick and injured.

"What's not so obvious is there are 2,000 people at the hospital … doing innovative research to improve the lives of children today and tomorrow."

"We are putting into place the vision of the hospital around the world."