It's an annual tradition, writing a letter to Santa. But what are kids saying to the man in red? We visited Santa's helpers at Canada Post to find out.

It's an annual tradition, writing a letter to Santa. But what are kids saying to the man in red? Canada Post let us inside their workshop so we could peek at some of the letters, and it turns out most kids are asking questions.

"Does Rudolph have a girlfriend?"

"Can you bring pets?"

"How many outfits do you have? Or is it just the one?"

"Are the elves driving you crazy?"

Every year thousands of kids write letters to Santa, and put them in the mail to The North Pole. That's where Canada Post comes in. Every letter with the postal code HOH OHO is directed to the mail service, where Santa's helpers read every letter and help a very busy St. Nick respond. 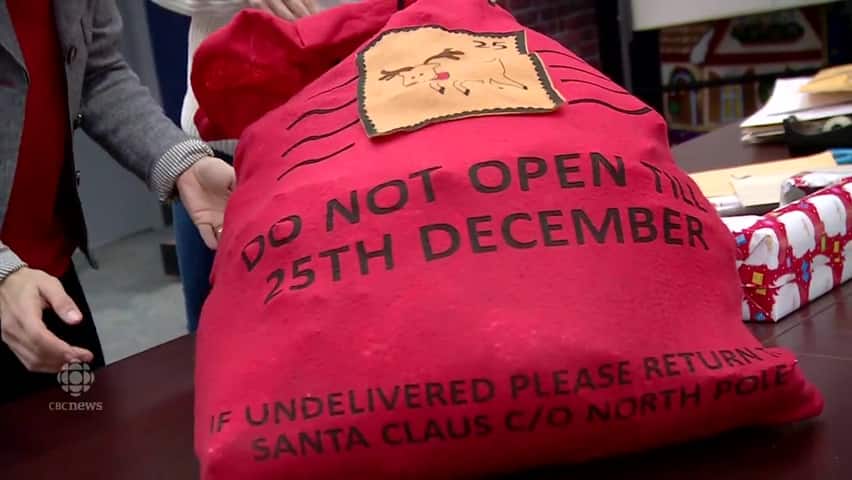 What are kids saying in their letters to Santa?

4 years ago
2:04
Canada Post let CBC Toronto peek inside some letters to Santa. 2:04

"My most favourite thing of all is it keeps the magic of Christmas alive," said Patricia Burn, one of Santa's helpers at the South Central post office.

"I am a Christmas-aholic ... and this just makes my world spin."

But some kids had more unusual requests.

"I don't have a tambourine, could you please bring me one at Christmas time?," asked another.

"This year I would like my father to come, so we can all be together for Christmas," wrote one boy.

One letter came from someone with an inner child.

"Dear Santa," she wrote. "I hope you have a great Christmas. This year I am 83 years old and I'd love to get a letter from you."