The federal and Ontario finance ministers have promised to meet every quarter with the mayor of Canada's largest city to try to rein in the hot real estate activity in the Greater Toronto Area and beyond. But as to what other new measures they're planning, both ministers remained tight-lipped.

The federal and Ontario finance ministers have promised to meet every quarter with the mayor of Canada's largest city to try to rein in the hot real estate activity in the Greater Toronto Area and beyond.

But as to what other new measures they're planning, both ministers remained tight-lipped.

Neither federal Finance Minister Bill Morneau nor his provincial counterpart Charles Sousa promised any specific legislative or regulatory changes. Although Sousa had previously discussed the possibility of a tax on foreign speculators, he told reporters to wait until the April 27 budget to find out his plans.

Toronto Mayor John Tory used the meeting to press the province for approval to levy a tax on vacant properties, something he announced three weeks ago as a measure to increase supply in a parched market.

But although both the mayor and Sousa alluded to that fact that the provincial budget contained measures to cool the market, neither said whether Toronto had received the province's blessing on its request.

Morneau promised only his willingness to keep meeting about the issues of housing affordability and to provide the lower levels of government with federal data connected to the housing market. He didn't specify exactly what sort of data that might be, except to say that it would "support tax compliance" within the GTA's real estate sector.

Ottawa will dedicate resources within the Canada Revenue Agency to ensure that those in Toronto and the surrounding hot real estate markets are complying with real estate tax laws.

And he agreed with his provincial counterpart, Charles Sousa, and Toronto Mayor John Tory that the federal government needs to ensure that banks and other mortgage lenders "are operating prudently" to make sure the economy remains stable.

'At least we're going to talk'

On Tuesday morning, Tory said there are no simple solutions to the affordable housing crisis, as Canadians across the country watch prices soar.

"I don't think there are any magic answers to this," Tory told CBC Radio's Metro Morning. "I think if somebody had one, it would have been unveiled by now. So at least we're going to talk."

The trilateral meeting occurred as the Canadian Real Estate Association issued its latest data on home prices. According to Tuesday's CREA figures, the average Canadian house is now worth $548,517, up 8.2 per cent over the previous year. That number is skewed by hot activity in the GTA, CREA said.

The volume of sales across the country has also gone up: home sales were up 1.1 per cent in March compared to February, setting a new monthly sales record at more than 46,300 residential units sold.

Also Tuesday, a Royal LePage housing survey indicated that the average price of a single-family home in the GTA has reached $759,241, up 20 per cent over last year, while condo prices are up 11 per cent to $408,908.

The real estate agency said the GTA's unrelenting gains are now driving prices up as far away as London, Ont., and Windsor, Ont.

When the federal government tabled its budget last month, Morneau left out a measure that Sousa had been asking for: an increase to the capital gains tax on second homes. He also noted that measures the federal government has put forward will help all parts of the country, including increasing down-payment requirements for higher-priced homes and a mortgage stress test requirement for some purchases. 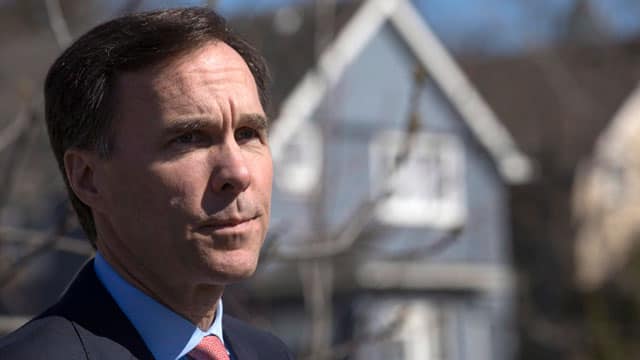 In fact, that was one of the few points on which Morneau was clear Tuesday: not to expect those capital gains taxes to increase in the near future.

As for Tory, he said he believes three measures will help in Toronto: a plan to address the "longer-term issues" of affordable rental housing; better data, particularly on speculation in the market by both domestic and foreign buyers; and consideration of a tax on vacant homes.

The lack of data is of particular concern, Tory said, because it's clear that there's some speculation going on in the market, but lawmakers are "flying blind" when it comes to knowing the real picture.

"The experts tell us that there's a degree of speculation going on in the marketplace, but if you said 'do we know for sure who is speculating and the kind of speculation that's going on,' we actually don't," Tory said. "There just aren't records to tell us that."

The Toronto Real Estate Board has suggested foreign buyers are having an impact in the GTA, but there isn't concrete data on the scope of the problem. The province is supposed to start collecting data on foreign buyers, Tory noted.

"This is one of the problems, that when you're looking for a solution or something that will help cool the market, you have to understand what's causing it to go up," Tory said.

"And I think there may be as much domestic speculation going on of people who are buying and selling houses because they think it's going to go up and up and up, and they are trying to take advantage of that, as there is speculation from outside the country."

But like the premier, he's also concerned about "unintended consequences" of any measures introduced.

"There are a lot of people who went out and borrowed quite a lot of money to buy a house based on a specific value that it had on a given day, and if that value suddenly dropped, and the bank phones and says, 'By the way, we need some more money from you,' this is going to be a very serious problem," Tory said.

Meanwhile, the issue of housing affordability does not pertain solely to homebuyers and sellers. CBC Toronto's No Fixed Address series has highlighted the issue of rents rising higher than some tenants can afford in units built after 1991, which are not subject to rent-control guidelines.

Earlier this month, however, a report from Urbanation noted that while rents are rising dramatically for some, the average rent for a condominium apartment dropped in the first quarter of 2017 and stabilized year-over-year.

On the issue of purpose-built rental housing, Tory said the city needs more of it, but quibbled on whether bringing all rental units under the same rent-control measures would help or hinder that effort. The Ontario Liberals have pledged to amend the province's rent-control guidelines, but have not said when.

"The bottom line is it's people investing in these buildings and they expect to have a return, and if they look at their return as being limited … if the government tightens that screw too much, then the answer is yes, people will say either, 'fine, we will build condos' or they will build nothing," Tory said.

So any moves "should be accompanied by measures which mitigate that by saying, 'OK, we'll take the HST off building materials for purpose-built rental accommodation,' or something that says to people in that business, 'we still want you to build.'"