The city's latest proposal for a new park downtown would see a deck built over top of the rail corridor spanning 21 acres from Bathurst to the Rogers Centre.

City councillor says the city will fund the project with help from province, feds

Cressy announced plans to build the park, which would span 8.5 hectares (or 21 acres) along the city's waterfront rail corridor from Bathurst Street to just past the Rogers Centre, with Toronto Mayor John Tory on Wednesday.

"The only way we can create signature and central new parks and public spaces is by being a little more creative," said Cressy, the councillor for Ward 20 where the proposed park will be, in an interview with Metro Morning.

"The reality is we do not have 21 acres of land in downtown Toronto ... waiting to be assembled, bought and turned into a park."

To build the park the city will need to buy the air rights to the space above the railway tracks, an area now owned by Metrolinx, the Canadian National Railway and Toronto Terminals Railway. After those rights are secured, the city will have to rezone the area so it is designated explicitly for park use, Cressy said.

Cressy said the park will come with a cost, but that it's a necessary investment and he believes city council supports it.

"Far too often in the past these great projects get tied up in a quick discussion of nickel and diming them and they don't get done. That's not how we're approaching this," Cressy said.

The park will come with a hefty price tag, Cressy said. A similar park in Chicago, Millennium Park, cost $33 million per acre.

"We know it will not be cheap, that's clear, and it's going to take years," said Cressy.

He said the city plans to partner with both the province and the federal government to pay for the project. It will also rely on a city fund for park acquisition and money designated for park space from development charges to cover the cost. 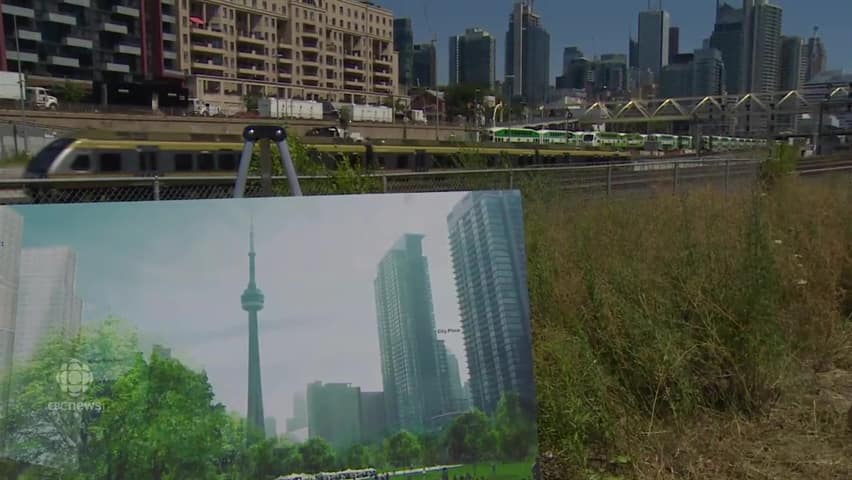 5 years ago
0:56
How are Toronto residents reacting to #RailDeckPark? 0:56

"It's not going to happen overnight," said Cressy. "We have to do our due diligence."

"The opportunity to create a new central park in the area of downtown Toronto where a lot of the tourism is, where a lot of the workers are, that will serve to be, I think, a real economic boom for the city as a destination but also the type of project we should have done 20 years ago."