Early data shows more cyclists are using Bloor Street to get around after the city added bike lanes to the arterial road in August.

Early data shows more cyclists are using Bloor Street to get around after the city added bike lanes to a section of the arterial road from Avenue Road to Shaw Street in August.

A report released Friday shows that there has been a 36 per cent increase in cyclist traffic on Bloor Street, from approximately 3,300 users daily to 4,500. Of that increase, 25 per cent can be attributed to new cyclists.

But while cyclists are rejoicing, drivers are experiencing some new headaches on the road.

Drivers who travel westbound on Bloor Street during the evening rush hour have seen just over eight minutes added to their commute. In the morning, the drive is taking approximately four minutes longer for people travelling eastbound.

Those numbers, which were calculated through a travel time assessment using a combination of traffic cameras and driver surveys, are cause for concern, Gray said.

"We have to look at the balance of uses along all of these corridors," she said.

"I think the fact that we haven't made any operational tweaks as of yet, to the signal timing, to the turn restrictions, to all of those tools that we have in our toolkit to improve the situation once we see how its working. I think we're going to see a real reduction in that time."

Gray says she's been looking into her options and plans to tweak the traffic systems on Bloor Street in the next couple of months to improve travel times for driver. .

"I really want to see that we're making these corridors work for all users," Gray said.

When it comes to businesses on Bloor, the reaction to the bike lanes is split.

"It's mixed reaction. Fifty-three per cent of local businesses have expressed support for this project but we know there are also those who don't and we're working closely with them to address their concerns," said Joe Cressy, city councillor for ward 20, home to a large swath of the bike lanes development.

Cressy says the city take business concerns seriously, and is currently conducting an economic impact study to ensure the bike lanes are the right move for residents as well as businesses.

"What we've received today are counts on cycling ... but we know there is more important information on economics, on the parking as well as the safety," Cressy said. 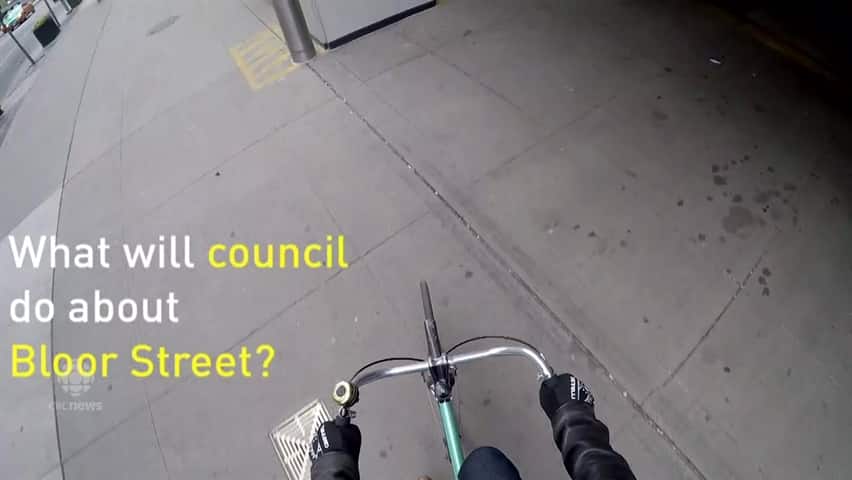 5 years agoVideo
1:55
Metro Morning Host Matt Galloway gives us his point of view on biking along Bloor Street West without bike lanes during the morning commute. 1:55

In a statement released on Friday morning, Mayor John Tory stressed that he's watching the business impact, and has been on Bloor Street four times since the project started to get feedback.

"At the half-way point of this process, we have preliminary data that will help us to make changes to improve the flow of people along Bloor Street for the duration of the pilot," he said.

Tory also called the project part of the "most comprehensive data measurement the City has ever done, tracking everything from travel times, bike and pedestrian volumes to safety, business impacts and community support."

Too soon to say if bike lanes a win

The city is looking at four factors to evaluate the success of the bike lanes: public perception, safety, impacts on general travelling public including drivers, cyclists and pedestrians, and the effect on businesses.

Gray said it's too soon to say whether the Bloor bike lanes are a success, but that she's feeling positive about the way things are headed.

"My interest is in trying to get people, anybody who can be on a bike, on transit and as a pedestrian commuting and making most of their daily trips that way," said Gray.

Still, the numbers show that Torontonians are generally supportive of the new bike lanes.

Sixty-four per cent of local residents and businesses agree that the bike lanes offer a "safe, comfortable environment for cyclists, with acceptable trade-offs in traffic flow and parking convenience," and 63 per cent of drivers say they feel safer sharing the road with cyclists with the addition of the bike lanes.