'I wish I could have gotten more people,' says teen who rescued girl from deadly Brampton fire

Teenager Sheldon Teague saved a young girl from a deadly overnight fire by running into the burning building and carrying the 9-year-old outside.

The teenage boy who kicked down a door and fought through smoke and heat to rescue a 9-year-old girl from a deadly fire in Brampton, Ont., says he felt compelled to try to save as many people as possible.

Sheldon Teague, 19, saved Zoya Kapadia's life when he carried her out of her house as a fire tore through the building early Tuesday morning. Kapadia, now in serious but stable condition, lost her mother, father and sister in the blaze.

Teague told Gill Deacon on CBC Radio's Here and Now about what happened.

Gill Deacon: You were staying in the basement when the fire broke out. Tell me what you experienced.

Sheldon Teague: It was about 3:30 in the morning, I heard screaming from upstairs. The person I was there with noticed that there was a funny smell, then I noticed the smell of smoke as well. When we went to go wake up her father, I saw black smoke coming out of the ventilation system, so I put on my shoes. As soon I walked up I saw that there was fire coming from the bedroom. I went around to the front and flames had taken over the front of the house. So I kicked in the door and began yelling for whoever was inside to come towards my voice because it was too smoky for me to see. 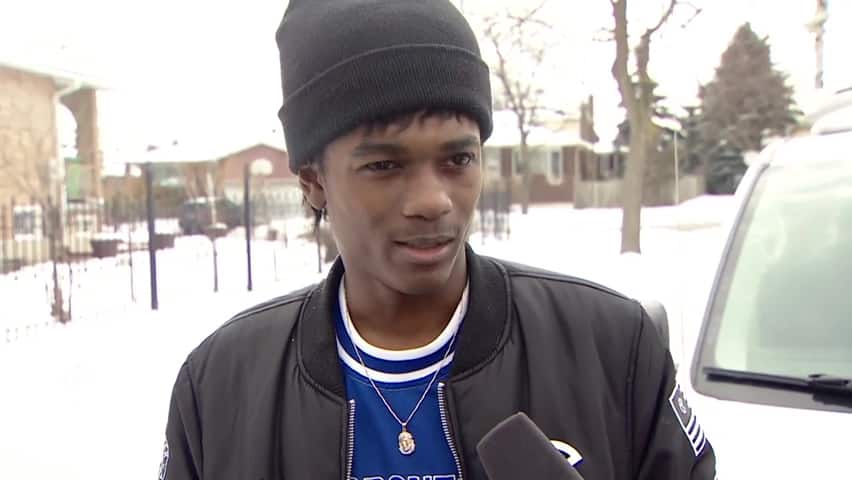 4 years ago
2:13
Sheldon Teague was staying at a friend's house in Brampton that caught fire, he describes how he rescued some people from the home. 2:13

I tried to enter the house at first and the smoke completely stopped me. I went back outside to get a flashlight, and I found my friend and pretty much took her phone because another lady was calling the police. I turned on the flashlight, went into the house and continued yelling for whoever was there to look at the light, come towards the light. I had to get down on all fours, and that's when I saw that there was someone in the middle of the hallway. Just legs. It was smoky so I couldn't see two feet in front of me.

GD: So you made your way through the smoke towards the pair of legs?

ST: Yes. I picked up the person — turns out it was a little girl — and I got her outside and went back inside the house to try and find more people, but it was too hot, too smoky.

GD: We were taught not to run into burning buildings. You were clearly running on a different instinct.

ST: I was just thinking, 'There's someone in there, dying right before my eyes, and I'm not going to sit back and wait for them to stop screaming, I want to make sure I can at least try and help them.'

GD: Did you know these people?

ST: No, I've never talked to them before, never interacted with them.

GD: So you got her out, then what happened?

ST: While I was still inside the house, screaming for other people, trying to make my way through, the fire truck showed up, and that's when my friend came to the door and told me to get out of the house, so I left the house and they took over from there.

GD: Did you check on the little girl?

ST: That was the first thing I did once I got out of the house. I went searching around. I believe the lady who first called the police put her inside of her SUV and was keeping her warm and away from the situation.

GD: How are you feeling now?

ST: Pretty shaken up. I wish I could have gotten, if not everyone, more people — but it was impossible.