Premier Doug Ford has announced that tighter restrictions on social gatherings that were made in high-risk areas last week have now been mandated in all regions of the province.

Premier Doug Ford announced the province is lowering the number of people allowed at social gatherings across Ontario, as the province reported 407 new cases of COVID-19 on Saturday.

Starting immediately, private, unmonitored gatherings will be limited to 10 people indoors and 25 people outdoors for the next 28 days, Ford announced at a news conference at Queen's Park.

The premier also said those who break these rules risk facing a minimum fine of $10,000 for the organizers and a $750 fine for guests. Events held in staffed facilities are excluded, such as movie theatres, places of worship, gyms and convention centres.

"This is about everyone's health and safety, and we have to come down hard on the rule-breakers," Ford said. 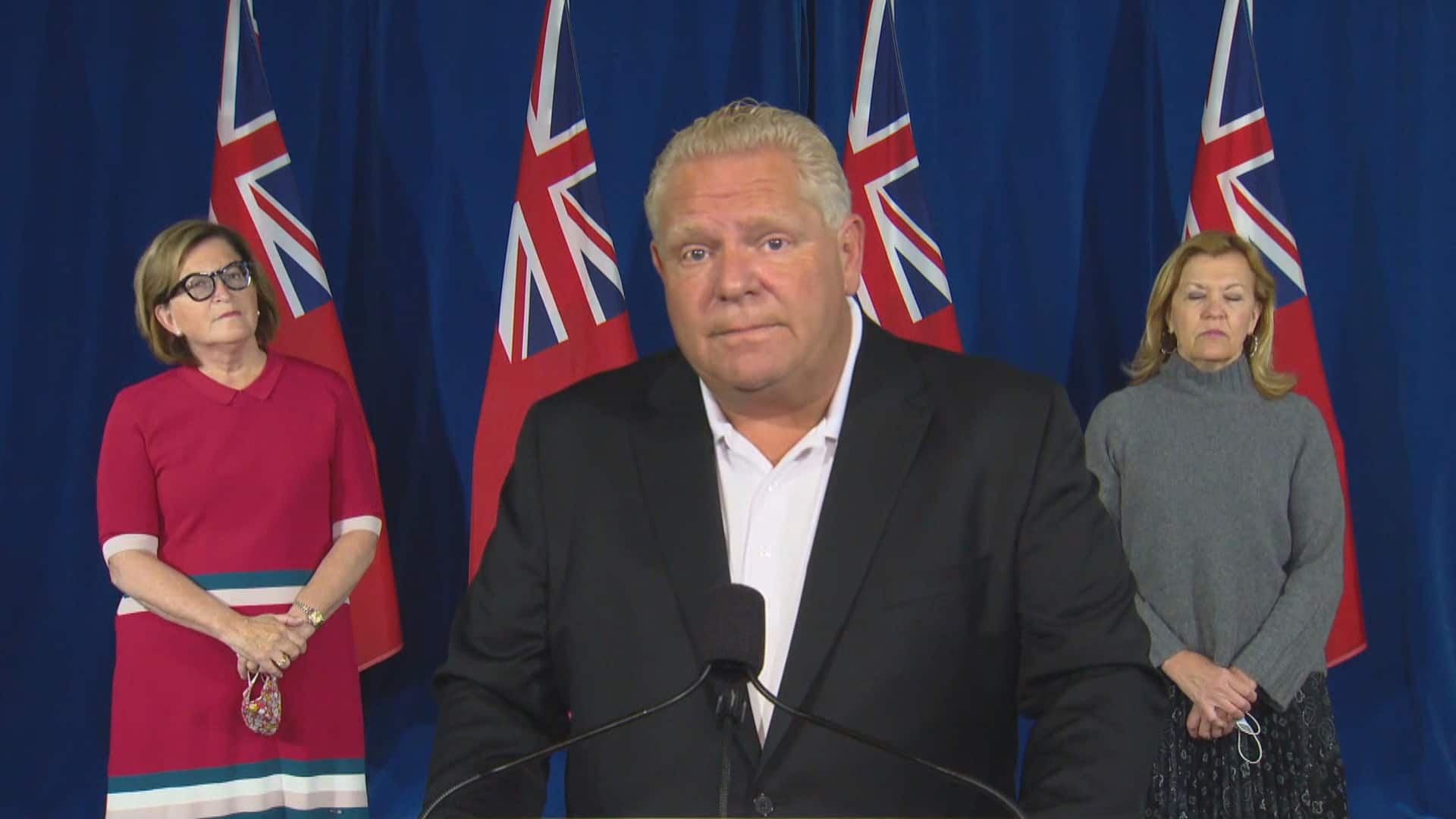 1 month ago
1:25
Ontario Premier Doug Ford announced the province is lowering the number of people allowed at social gatherings across Ontario. 1:25

This comes as the province tries to curb the "alarming growth" of COVID-19 cases by limiting large gatherings — what health officials say are significantly contributing to the surge.

"We can't have these wild parties right now. It's just way, way too risky," Ford said.

"The increases are happening, particularly in certain dense urban areas, but there have been indications of small increases elsewhere and we are trying to avert further increases as much as possible."

The province has not released specific data pertaining to social gatherings nor the percentage of cases coming from large gatherings or parties.

But Yaffe said the government is seeing social gatherings as the cause in an "increasing proportion of cases."

The reason, she said, is because the public is unclear about what it means to have a safe social gathering.

If you attend a gathering or see anyone who is outside your social circle, even if it's within the gathering limits, Yaffe said, "you have to keep your distance, two metres, or wear a mask."

You're only allowed to breach physical-distancing restrictions, without wearing a mask, with those who are in your social circle, which can be up to 10 people, Yaffe said.

"It is an increasing trend and that's why we're trying to address is proactively," she said.

It's also the second day in a row the province has recorded more than 400 new cases of the novel coronavirus since that same date.

A majority of the daily case count is concentrated in three public health units: Toronto, Peel Region and Ottawa. They recorded 129, 94, and 55 cases, respectively, Health Minister Christine Elliott said in a series of tweets.

Seventy-one per cent of Saturday's cases were found in people under 40, she said.

The uptick represents a 0.9 per cent increase in cases, bringing the provincial total since the pandemic began to 46,484.

Of these cases, nearly 88 per cent are considered resolved, with 177 cases reported resolved Saturday.

The province processed a record number of tests on Friday of the virus, reporting 38,940.

"In response to growing demand for testing, Ontario Health has increased capacity at eight assessment centres across Toronto, Peel and Ottawa with seven pop-ups launched in the regions and more coming to help increase access and cut down wait times," Elliott said in a tweet on Saturday.

In response to growing demand for testing, Ontario Health has increased capacity at eight assessment centres across Toronto, Peel and Ottawa with seven pop-ups launched in the regions and more coming to help increase access and cut down wait times.

Elliott also said there has been a small increase in hospitalizations to 64 cases, as intensive care unit admissions and the number of patients on ventilators remain stable, reporting 20 and 10 cases, respectively.

The province has reported one new death from the virus, bringing the total death toll to 2,826. A CBC analysis of local public health units, which is more up to date than the provincial figures, had the real total at 2,865 deaths as of Saturday morning.