Members of a Brampton, Ont., family have launched a $12.5-million lawsuit after a 20-year-old man was found dead in the bathroom of the hospital where he was supposed to be on suicide watch.

Man, 20, was on suicide watch when he was found dead in bathroom, lawsuit says 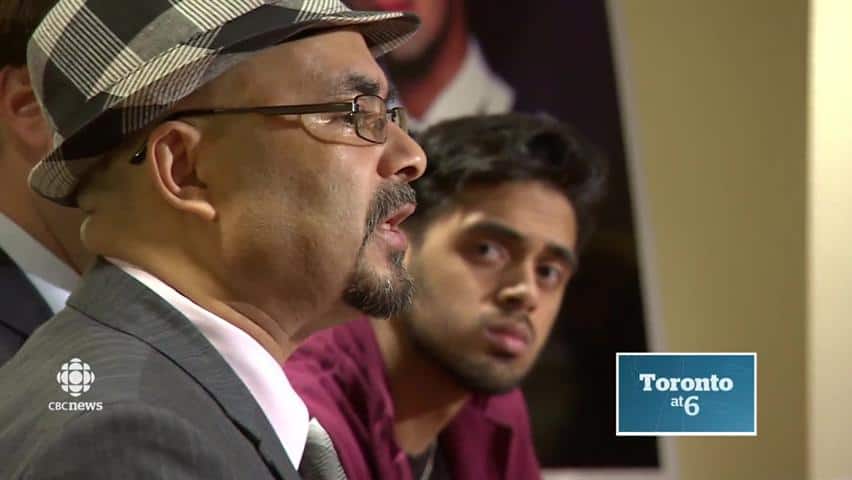 6 years ago
2:01
A Brampton, Ont. family sues an area hospital over the suicide of 20-year-old Prashant Tiwari 2:01

Members of a Brampton, Ont., family have launched a $12.5-million lawsuit after a 20-year-old man was found dead in the bathroom of the hospital where he was supposed to be on suicide watch.

Prashant Tiwari committed suicide last June at Brampton Civic Hospital while under treatment, the lawsuit alleges, adding he had been admitted to the psychiatric ward after he had started cutting himself.

Rakesh Tiwari alleges his son was left unattended in a hospital bathroom for three hours. During that time, the 20-year-old used his hospital gown and a chair to hang himself, his father said.

"He volunteered himself to the hospital. He knew he had some problem, and he was fighting and he needed help," said Rakesh Tiwari.

Tiwari believes staff were supposed to check on his son every 15 minutes.

"My son should not have been unattended," he said.

A lengthy statement of claim — filed at Brampton's Superior Court of Justice on Wednesday — names the hospital and numerous employees as defendants, and lays out a timeline of what happened to Prashant Tiwari in the hospital.

According to the statement, Rakesh Tiwari brought his son to Brampton Civic Hospital on June 16, 2014, with self-inflicted cuts to his neck and chest that required stitches to close.

In hospital, the document says, Prashant Tiwari pleaded with hospital staff "to help him take his own life."

In the coming days, the document states, Tiwari continued to report having suicidal thoughts and was put on several drugs, including Risperdal, an anti-psychotic, as well as several other medications.

At one point, hospital staff was also forced to restrain Tiwari after he was found striking his head repeatedly against a wall.

On the day before his death, Tiwari had appeared to be improving and was set to be transferred to a non-secure psychiatric unit in the hospital, the report says.

But around 2 p.m. ET on June 26, while still in the intensive psychiatric unit, he asked for shower supplies and entered the shower area.

The document says the registered nurse responsible for checking on his well-being took a break, and another hospital worker didn’t inform her that Tiwari had gone into the shower.

The document claims Tiwari was left unattended for two hours and 40 minutes until his body was found.

After his death, the statement of claim alleges, 12 people accessed Prashant’s medical records without proper authorization for unknown reasons.

None of the allegations has been proven in court.

Rakesh Tiwari also said that during the 10 days his son was in hospital, staff didn’t tell him the type of medications Prashant was on, or his diagnosis.

William Osler Health System, the organization that runs the hospital, issued a written statement that said: "While we do not comment on an individual patient case, we have and continue to express our sincere condolences for the family's loss."

The Tiwari family say it hopes the lawsuit will prompt all hospitals to review their procedures around potentially suicidal patients.

The family was set to hold a news conference in Toronto on Wednesday to continue the call for better treatment for high-risk patients.