Police under pressure in Toronto budget that floats tax hike

City of Toronto staff are recommending a 1.95 per cent property tax increase as part of the 2013 operating budget that the city manager says can only be balanced if the police service holds the line on spending. 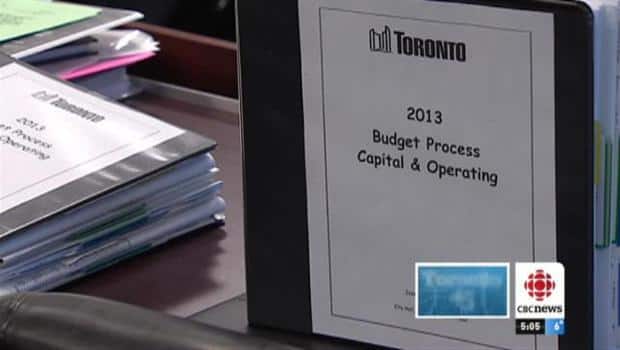 City of Toronto staff are recommending a 1.95 per cent property tax increase as part of the 2013 operating budget that the city manager says can only be balanced if the police service holds the line on spending.

The proposed increase was unveiled in a presentation Thursday at council's budget committee by staff at the start of the budget process for the coming year. A resident of the average dwelling in Toronto — which is valued at $474,000 — will have to pay an extra $48 as a result of the increase.

Mayor Rob Ford was prepared to live with a 1.75 per cent increase in 2013, followed by a tax freeze for the next two years.

Staff also recommended that commercial tax rates go up by 0.65 per cent.

"Because we were prudent fiscal managers and we watched every single penny of the taxpayer's money, we're able to bring this in line." Coun. Doug Ford said Thursday.

The proposed budget assumes no increases in spending for all city departments.

That includes the Toronto Police Service, setting up a showdown between police Chief Bill Blair and budget committee chair Mike Del Grande, who was appointed to the police services board on Tuesday by council.

Del Grande has said that police need to hold the line on spending like all other departments.

Blair has said that freezing the police budget in 2013 would have the effect of implementing layoffs. He has also said he wants to start hiring new officers in the coming year, having held off making any new hires for the last two years.

The budget committee and council can still make amendments to the proposed budget before passing a final budget in the new year.

The budget also calls for 104 layoffs within Toronto Fire Services in order to save $6.3 million. The service currently employs just under 3,200 people.

"In those things that create community safety and community health, there you find four times the cuts," Coun. Shelley Carroll said about the losses affecting the emergency services.

The budget estimates a further $4.5 million can be saved by excluding dialysis patients from the list of those eligible for the TTC's Wheel Trans service.