Toronto Police Services and correctional officers must revamp their policies on interacting with transgender inmates — especially at the point of arrest — following a historic settlement with a man who was stripped of men's clothing, forced into women's underwear and put into a holding cell for women. 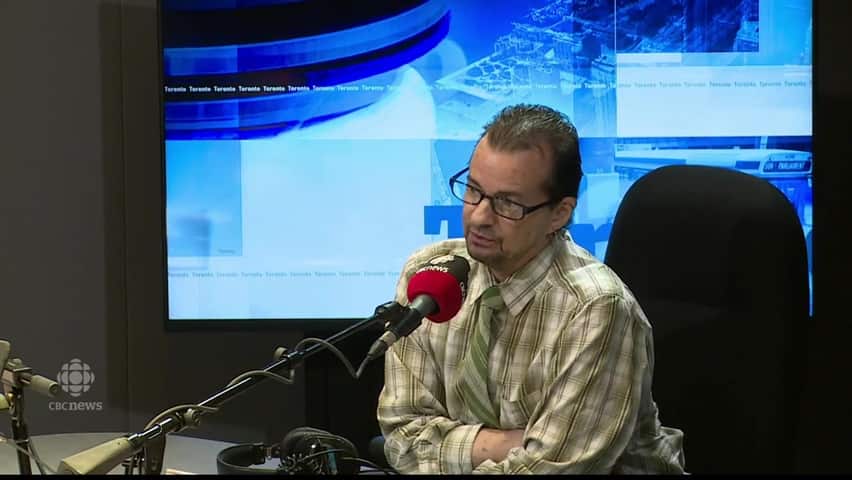 5 years ago
7:47
Boyd Kodak, a transgender man who was forced into clothes and jail for women, talks to Matt Galloway about his historic settlement with Toronto police that will see the force revamp their policies. 7:47

Toronto Police Services and correctional officers must revamp their policies on interacting with transgender inmates — especially at the point of arrest — after a historic settlement with a man who was stripped of men's clothing, forced into women's underwear and put into a holding cell for women.

Boyd Kodak was arrested on Dec. 6, 2012, on harassment charges that were soon dropped by the Crown.

"I really don't even believe at this point that the other side really understands the real impact of what they've done to my life," Kodak said in an interview Tuesday. "And I felt like this could never, never happen again to anyone else."

The Gormley, Ont., musician and activist says the degradation he endured at the hands of the criminal justice system prompted him to use his experience to effect change. So in 2014, he filed a complaint with the Ontario Human Rights Commission (OHRC), and the case went to mediation last week in advance of a hearing.

Kodak's legal team on Thursday struck a settlement with police that includes both an award for him, and the promise of changes to policy within police and correctional services. The exact details of both parts of the settlement are still protected by a confidentiality agreement, the man's lawyers said.

'Never going to leave me'

Kodak has since been diagnosed with depression and anxiety, and is being treated for post-traumatic stress disorder (PTSD), he said.

The whine of a siren can trigger an anxiety attack. When he was pulled over by a cruiser last year, he said, he could hardly hold his documents in his shaking hands.

"The number of years it took me to discover myself, to have the strength to go ahead and make the change … for them to just change that by just [wiping] the slate," he said. "It's an experience that's never going to leave me."

York Regional Police officers knocked on his door in the wee hours of that December morning 3½ years ago, arrested him and turned him over to Toronto police, according to the complaint Kodak filed with the OHRC.  A Toronto officer asked Kodak if he was a 58-year-old man, which he confirmed before later handing over his identification.

The documents that confirm his gender identity were updated roughly 20 years ago when he transitioned from female to male. Kodak has facial hair, wears male clothing and has a deep male voice.

But after a strip search, he was moved to the female holding cells. A day later, he was transferred to Vanier Centre for Women, where he was strip searched again and correctional officers took away his penile prosthesis, despite his protests.

I told them, 'you're stripping me of my identity.'– Boyd Kodak, transgender man put in a female jail

"To me, that's me, that's my body part," Kodak said, his voice shaking. "If someone, God forbid, loses a limb and they have a replacement — that's their body part. It's not an inanimate object.

"I told them, 'You're stripping me of my identity.'"

Kodak appeared in a Toronto court the next day, in the same green prison gown worn by the female prisoners. The men wore orange jumpsuits and Kodak said he was harassed, because he clearly looks like a man.

"People would yell [at] me, because sometimes you get escorted through the halls," he said. "They'd say things like 'What are you anyway? What were you born? What's in your pants?'"

Boyd was effectively "outed" by the justice system, said one of his lawyers, Aditi Agnihotri, something that can risk inmates' safety, especially if they are moved between facilities for different genders.

The new policies should help address that, Agnihotri said. Some of the details of the resolution are protected by a confidentiality clause, but Kodak and his counsel say the new guidelines must protect an inmate's right to self-identify with a certain gender.

That aligns with the policy adopted by the Ontario Ministry of Correctional Services in 2015.

Police will have between 12 and 18 months to implement the new policies, according to Kodak's counsel, which they say should also ban withholding any prostheses.

Police have already made changes

"This will bring about more transparency and accountability with respect to how they treat their transgender inmates from the moment of arrest to even detention," Agnihotri said. "This is a vulnerable group and there needs to be more education so that this could be better dealt with the next time."

By June 24, Toronto police and the human rights commission will set out the terms that will guide how the force must revise its policies and training. Both Kodak and a press release from the Toronto police say the transgender community must be involved in the creation of those policies.

Police said they have already made changes to the way they interact with the LGBT community in the years since Boyd was arrested.
CBC's Journalistic Standards and Practices|About CBC News