Police release video of shooting prior to alleged gang-related kidnapping

Toronto police say they are looking for two males allegedly involved in a kidnapping of two teen boys last week after releasing dramatic footage of an armed standoff just before what is being called a "gang war kidnapping." 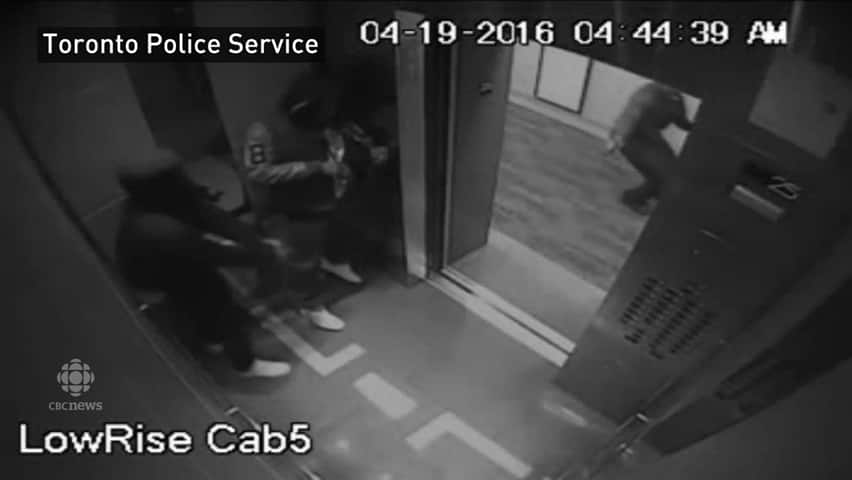 Update: Toronto police had initially released the name and photo of a 17-year-old suspect sought in this case. Judicial authorization to identify the boy has now expired and he can no longer be identified under the provisions of the Youth Criminal Justice Act.

Toronto police have released dramatic video showing an armed standoff in the elevator of a Front Street condominium that preceded what they are calling a "gang war kidnapping."

Canada-wide warrants have been issued for the arrest of two suspects allegedly involved in kidnapping two teen boys believed to have been at the condominium, where a party was taking place.

Lincoln Anthony Richards, 23, and a 17-year-old are wanted in connection with the alleged kidnapping.

"This is a gang war kidnapping," Staff. Insp. Mike Earl said about the incident.

Earl said the kidnapping occurred after four men associated with the Young Buck Killas took an elevator to the 25th floor of a condominium at 300 Front Street near Blue Jays Way looking for members of rival gang Queen's Drive Crips, which was allegedly planning to crash a party there on April 18.

Police said the four got out of the elevator and that gunfire was exchanged before two people retreated into the elevator. One man in the elevator was shot and wounded.

According to police, two youths associated with the Queen's Drive Crips, both 17, were held against their will as a result of the altercation, and beaten and threatened with firearms.

The teens were reportedly tied to chairs, beaten, forced to perform sex acts and moved to different locations in the Flemington Road area of Lawrence Heights over the course of two days. Police also said the teens were forced to play Russian roulette with a loaded handgun.

The two were released on April 23 following a demand for a ransom, which police said family members paid.

On Saturday, police arrested a 19-year-old in connection with the alleged kidnapping. Two other men ages, 18 and 23, as well as a 16-year-old, were arrested Sunday for possession of a gun seized at a home in the Don Mills Road and Sheppard Avenue East area.

Police continue to seek Richards and the teen suspect, whom they describe as "well-known gang members," adding that Richards's family members may have been present at his home when the beatings took place and are also being sought.

"We are here to apprehend these individuals as soon as we can. These two are the instigators," Earl said on Thursday.

"My belief is that they are armed and dangerous, and my fear is that there will be a retaliation of some sort if we don't get ahead of this."

Police said two guns appear in the video and that more were seen on parts of the video not released to the public.

Earl said that the incident points to a larger problem of gun violence in the city.

"There's a lot of guns on the street and the video shows it," Earl said. "It's like a boiling pot of potatoes, you're trying to keep a lid on it, but it's threatening to overflow."