The 29-year-old gunman in the deadly Danforth Avenue shooting rampage had severe mental health problems, according to his family.

Faisal Hussain, the man identified as the assailant in Sunday's deadly shooting rampage on Toronto's Danforth Avenue, had severe mental health problems, according to his family.

Ontario's police watchdog, the Special Investigations Unit (SIU), released Hussain's identity on Monday evening, hours after investigators say the 29-year-old Toronto resident opened fire on a number of Danforth Avenue restaurants in an attack that has left the city in shock.

Witnesses captured several chilling images and videos of the attack, which took place around 10 p.m. ET on Sunday and left a 10-year-old girl and 18-year-old Reese Fallon dead. More shooting victims remain in hospital, with some having undergone multiple life-saving surgeries, according to doctors.

Hussain died of a gunshot wound after exchanging fire with Toronto police. The SIU is looking into whether he was shot by police, or himself.

Hussain's family emailed a statement to CBC Toronto saying they are devastated by what happened and that their son was struggling with "severe mental health challenges," including psychosis and depression.

"We are at a terrible loss for words but we must speak out to express our deepest condolences to the families who are now suffering on account of our son's horrific actions," the family's statement said.

"While we did our best to seek help for him throughout his life of struggle and pain, we could never imagine that this would be his devastating and destructive end."

Earlier Monday, police searched Hussain's residence in the city's Thorncliffe Park neighbourhood, but have yet to release a potential motive for the shooting.

On Tuesday, the federal public safety minister's office said local police will continue to lead the investigation into Hussain's background.

"There is no national security nexus at this time," communications officer Hilary Peirce said in an email to CBC.

Several friends and neighbours who spoke with CBC News described Hussain as quiet and shy, and some were aware of his mental health problems.

Aamir Sukhera ran a public-speaking club, Toastmasters, that Hussain attended. He said Hussain told him he had psychosis and depression and was seeing a psychiatrist. 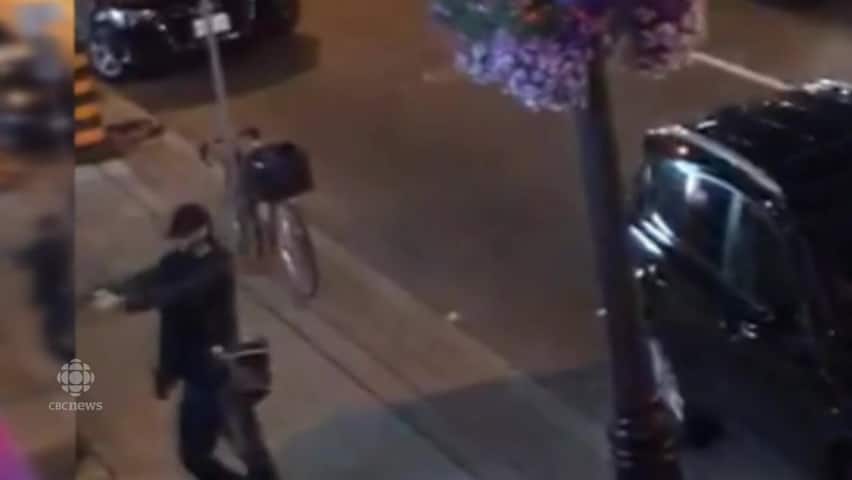 "I thought [Toastmasters] would be a good idea for him — it might help him open up and speak," he said. "And through the process, I discovered he had some sort of mental illness and that he was seeking help for it."

Sukhera said Hussain was polite, humble and reserved and that he wasn't violent.

During the attack, the gunman, dressed all in black with a black baseball cap covering part of his face, calmly walked down the Danforth Avenue sidewalk before turning and firing a black handgun into a restaurant.

Another image, captured by a store owner's surveillance system, appears to show him walking with the gun hanging by his side.

Other witnesses said he zig-zagged across the popular street — the heart of Toronto's Greektown — just to pick off targets.

Hussain died shortly after exchanging gunfire with Toronto police officers on Bowden Street, not far from the strip of restaurants where the attacks took place.

At an afternoon news conference, Toronto Police Chief Mark Saunders said the motive for the attack is still unclear, and he urged the public to provide any information they can about the incident.

Saunders said no officers were injured during the firefight.

The SIU investigates all cases of death or serious injury involving police.

The SIU says a post-mortem will be conducted on Hussain on Tuesday.

Here is the entire statement from Hussain's family:

"We are at a terrible loss for words but we must speak out to express our deepest condolences to the families who are now suffering on account of our son's horrific actions.

"We are utterly devastated by the incomprehensible news that our son was responsible for the senseless violence and loss of life that took place on the Danforth.

"Our son had severe mental health challenges, struggling with psychosis and depression his entire life. The interventions of professionals were unsuccessful. Medications and therapy were unable to treat him. While we did our best to seek help for him throughout his life of struggle and pain, we could never imagine that this would be his devastating and destructive end.

"Our hearts are in pieces for the victims and for our city as we all come to grips with this terrible tragedy. We will mourn those who were lost for the rest of our lives."