Leonard Rodriquez's grieving loved ones say he was a man who would drop everything to help those in need. But they say his death could have been prevented if he'd had the personal protective gear he needed to do his job.

Wife says Leonard Rodriquez, 61, was discharged from hospital 2 days before he died 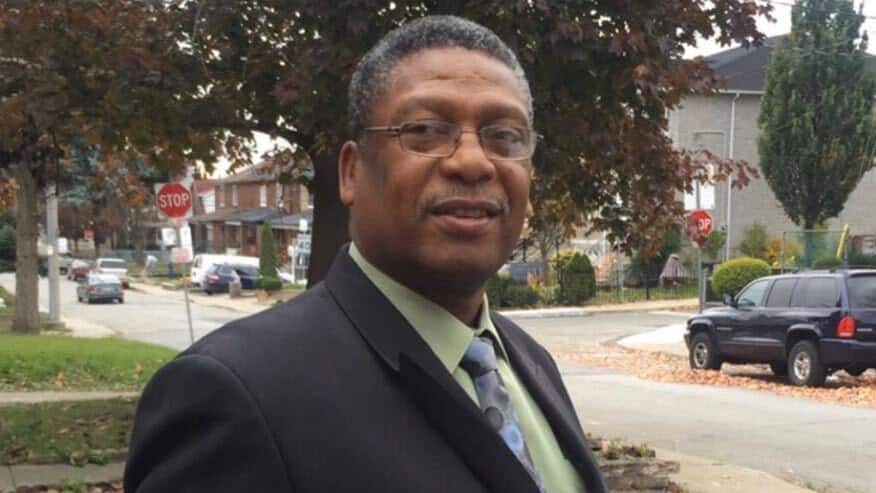 Leonard Rodriquez's grieving loved ones say he was a man who would drop everything to help those in need.

"He wants to see the job get done."

Rodriquez, 61, died Wednesday of COVID-19 and both his family and his union say his death was preventable. They say it was due to a lack of personal protective equipment (PPE) in his workplace.

"They were not providing him with protective equipment," his daughter said, referring to his workplace, Access Apartments, a supportive housing centre.

In a news release, Rodriquez's union, Unifor,  says he worked for an Access Apartments assisted living unit in Toronto, near Keele Street and Eglinton Avenue West.

His family says they grew concerned after he told them he was buying masks from a dollar store because his workplace wasn't providing him with any PPE.

When he spoke to his boss about the issue, Terena Rodriquez says, her father was told that supplies were limited and they were being saved in case an employee or resident became sick with COVID-19.

But the veteran personal support worker continued to care for his clients — until he was exposed to the virus.

According to Unifor, he was sent home on April 6 after possible exposure to COVID-19. While self-isolating, his symptoms worsened and he eventually tested positive for the novel coronavirus, the union says..

By May 4, his wife Dorothy Rodriquez says he was "delirious."

She said she called 911 and was eventually told to take him to Humber River Hospital herself.

A few hours later, he went home alone with a prescription, his wife says.

"He was so disoriented, he couldn't figure out what to do after they told him to go home."

By Wednesday morning, his daughter says they found Rodriquez unconscious, and she had to administer CPR until paramedics arrived.

Now, she and her mom are both wearing masks, even in the house, to protect one another in case of exposure. Terena says she hasn't yet been able to get tested for the virus.

"Standard hospital policy includes clinical assessments for safe discharge, and instructions to return to the emergency department for any reason," Joe Gorman, the hospital's director of public affairs, said in an email to CBC Toronto.

"We send our sincerest condolences to his family at this difficult time."

Toronto Paramedic Services say they are not able to provide a comment regarding the incident "at this time," acting superintendent Dineen Robinson told CBC Toronto.

Unifor, meanwhile, is calling Rodriquez's death a "preventable workplace exposure" due to a lack of PPE where he worked.

"Leonard worked for more than 30 years providing care for those in need. He'll be truly missed by his Unifor family and all those who knew him," said Jerry Dias, Unifor's national president.

"This tragedy could have been avoided if he only had access to proper personal protective equipment. Our COVID Heroes deserve better."

So far, five PSWs in Ontario have died from COVID-19. Rodriquez's death marks the first confirmed death of a Unifor member connected to the pandemic, and follows word of another personal support worker's death from the virus in the Ottawa area.

Rodriquez's workplace, however, says it works "diligently" to protect staff and residents by taking "every step possible" to ensure safety protocols are enforced.

"PPE has been, and is, available and is used when necessary in accordance with Public Health Guidelines and directives," said Michael Mathieson, executive director of Access Apartments.

"Throughout this pandemic, we have been providing timely, transparent communications to all staff and consumers."

The Ministry of Health has previously told CBC News the government "aggressively pursues all available efforts to increase this supply to ensure the appropriate health and safety measures are in place to mitigate" the transmission of infections.

Protecting the health and safety of front-line health-care workers and patients is a "critical priority for the government," the ministry said, and Ontario Premier Doug Ford says people can personally call him if they can't get access to sufficient protective gear.

In a statement issued Friday, Ontario NDP Leader Andrea Horwath says she was "devastated" for Rodriquez's family, especially after hearing reports that he was not provided the PPE he needed.

Unifor Local 40 represents 80 members at Access Independent Living Services. The union says another five members of Local 40 have tested positive for COVID-19, along with three clients at the facility.

The city says it reviewed the Toronto Community Housing building where Rodriquez worked and found that it met — and in some cases exceeded — standard infection prevention and control protocols set for high-risk areas.

"On behalf of my team, I extend my sincerest condolences to the friends and families of all individuals who have lost loved ones to COVID-19 in our community," Dr. Eileen de Villa, the city's medical officer of health, said at a news conference Friday.

Meanwhile, the city says it has placed an order for more than 30 million surgical masks, which are set to be delivered to various Toronto COVID-19 hot spots in the coming weeks.

The city also has some 500,000 N95 respirators on order, along with 6,300 surgical masks and 450,000 face shields, according to Fire Chief Matthew Pegg, the head of the city's emergency response team.

With files from Natalie Nanowski