Passenger suffers burns after cellphone overheats on plane at Pearson

A flight from Toronto bound for Vancouver was delayed by about two hours Thursday after a passenger's cellphone caught fire while the plane was still at the gate.

A flight bound for Vancouver was delayed by about two hours Thursday after a passenger's cellphone caught fire while the plane was still at the gate at Toronto's Pearson International Airport.

Around 7 a.m., Air Canada Flight 101 was sitting at the gate when a passenger's phone "began to burn," Air Canada spokesperson Peter Fitzpatrick told CBC Toronto in an email.

"The fire was immediately extinguished by crews and there was no damage to the aircraft."

The phone's owner was injured and was treated by paramedics. The passenger was able to walk off the plane, Fitzpatrick said.

Peel Region paramedics said they treated a patient for burns to a hand and transported the patient to nearby Etobicoke General Hospital.

Peel police confirmed Thursday afternoon that it was an LG phone that caught fire.

A spokesperson for Transport Canada told CBC in an email response that the federal agency is aware of the incident.

"‎The aircraft sustained no damage as the crew was able to extinguish the fire promptly. Once the fire extinguished, paramedics assisted the passenger in possession of the cell phone, who sustained burns to the hands," the statement read.

While the fire was "very contained," Fitzpatrick said, passengers seated nearby were asked to deplane so residue from the fire extinguisher could be cleaned up.

A video posted to social media by passenger Brandon Scott shows firefighters walking down the aisle toward the back of the plane. Several fire extinguishers can be seen on one of the seats. 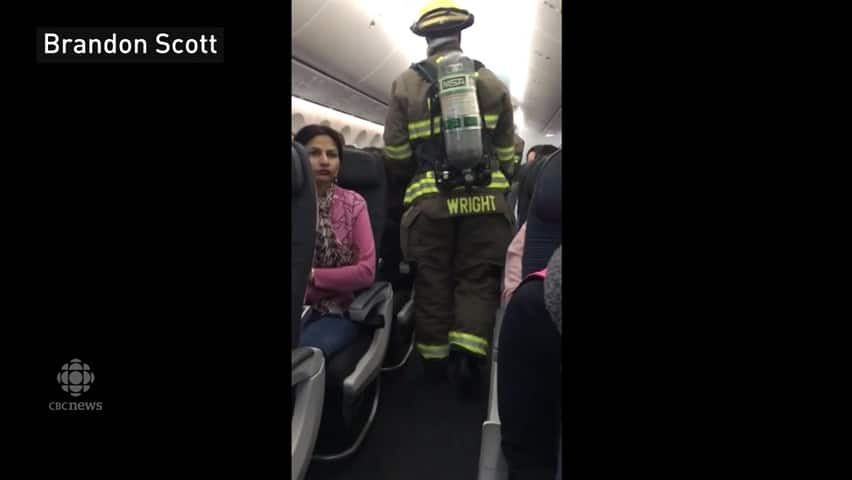 3 years ago
0:24
A video shows firefighters boarding a Vancouver-bound Air Canada flight grounded in Toronto after a cellphone caught fire. 0:24

The flight's status on Air Canada's website initially said the plane got off a few minutes early. However, the airline updated the information to say that the Boeing 787-9 with 266 passengers on board departed two hours late.

'A moment of real concern'

​Joe Cressy, a Toronto city councillor, was one of the passengers on the flight, and described hearing yelling on board before seeing smoke in the cabin.

"Any time you're in a plane and you look behind you and there's smoke and yelling, there's a moment of real concern and fear," said Cressy. "But frankly, thanks to the exceptionally professional response of the Air Canada staff, that concern went away and we were up in the air in two hours."

Cressy said the situation changed quickly from him wondering whether he was in danger to only having to worry about how long the delay would be.

"Had this happened while we were mid-flight it would be a very different feeling," said Cressy. "But the fact we were on the tarmac alleviated the situation to some degree."

I happened to be on the <a href="https://twitter.com/AirCanada?ref_src=twsrc%5Etfw">@AirCanada</a> flight this morning where the cell phone fire incident occurred. The Air Canada staff were quick and professional in their response and the Pearson Fire crew were excellent. Thanks all around.

Robin Smith, a spokesperson for the airport's operator, said that while they haven't heard of any phone-related fires at Pearson in the past year, phones catching fire are not entirely unheard of.

"In general terms, they're not uncommon, because there have had to be rules made for the Samsung Galaxy Note 7," said Smith, referencing a phone that was recently banned from certain flights because of a risk of catching fire.

"Lithium battery volatile problems are enough of an issue that it's a common topic of discussion and you see photos popping up online."