An unofficial "overdose prevention site" opened today in downtown Toronto, staffed by harm reduction workers with anti-overdose medication at the ready. Police were at the scene but allowed the site to operate.

The site, to be staffed by nurses, was opened by harm reduction workers in response to spike in drug overdoses 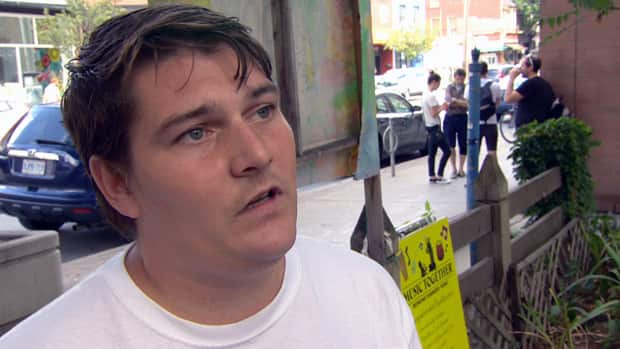 3 years ago
2:01
Harm reduction workers in Toronto opened an unregulated pop-up safe-injection site following a spate of deaths in and around the city 2:01

Harm reduction workers risked arrest Saturday to set up a pop-up injection site in Toronto's Moss Park, erecting a tent large enough for a handful of people, furnished with some chairs.

They've stockpiled overdose-prevention medication in the hope of saving lives.

After a spate of overdoses that has left several dead this month already, organizer Matt Johnson of the Toronto Harm Reduction Alliance, an advocacy network pushing for drug policy changes, said it was time to act — with or without the city's permission.

"We're just here to save lives, like all other first responders," Johnson said. "We can really make a dent in the number of people overdosing and dying in this city."

Given a recent spike in overdoses,  the organization decided not to wait for permission from police or city officials, Johnson said. "We should have done this months ago... Morally and ethically we can't hold back any longer. We just have to be brave and go ahead and do it."

Staffed by a registered nurse, overdose prevention trainers eager to share life-saving skills, and outreach workers tasked with scouring the park for used needles, the tent will welcome anybody who wants to bring in their own drugs.

Staff will keep watch as the substances are consumed and administer naloxone, the anti-overdose medication, to those who need it.

Toronto police spoke with organizers as the tent went up, ultimately deciding to allow it to operate for the time being.

"As Toronto knows, there is an absolute crisis on the streets right now," said superintendent Heinz Kuck of the Toronto Police Service.

"Although Toronto Police doesn't necessarily agree totally with an injection site like this popping up, because we do have the aspect of illegal drugs coming and going, the crisis supersedes that at this point in time."

Kuck said it'll be "business as usual" for officers patrolling the area, with no more officers there than on an average night — and all will be directed not to target anyone using the site, at least for now.

He added that the "absolute professionalism" of the site's organizers and the process they've set up, which includes medical professionals on staff and safe disposal bins for used needles, convinced him to allow the site to remain open.

Run exclusively by volunteers, the site has 140 overdose kits on hand — a mix of injection and nasal spray kits, each containing latex gloves and multiple doses of naloxone. Organizers also plan to distribute kits containing clean needles and crack pipes to reduce the transmission of infections.

Kuck said at this time "we're going to allow this to take place for the interests of the Toronto people."

Marilou Gagnon is a nurse and assistant professor at the University of Ottawa who founded an advocacy network that champions supervised injection facilities. She said there's a risk with sites that haven't received an exemption from Health Canada — technically, they're illegal, and anybody using or working in them could be arrested.

But applying for that exemption "is long and and it is expensive," Gagnon said. Because of that, she adds, overdose death prevention sites like the one in Moss Park have materialized despite the threat of legal consequences.

While a federally approved supervised injection site offers more resources, Gagnon said, a pop-up has the advantage of rapid response.

"It can be outdoors, indoors, it can be in a trailer — whatever you can put your hands on. The simpler the better, the cheaper the better. It's quick, you can implement it. And then you're focusing on saving people's lives if they overdose," she explained.

Multiple pop-up sites have opened in alleys and community hubs in Vancouver, unsanctioned at first by city officials. But police made no arrests, Gagnon said, and the city's public health authority eventually endorsed the sites as a means of battling the crisis. "We know they work," said Gagnon.

One of those sites, open on Vancouver's Powell Street since December of last year, received a federal exemption months later. It's now a fully endorsed supervised injection facility.

The federal authority has so far approved 16 sites across the country, with several more facilities announced in recent months in Vancouver, Ottawa, Victoria, and several smaller hubs in B.C., including Surrey, Kelowna and Kamloops.

In Montreal, three formal injection sites have been up and running since June after receiving a nod from Health Canada.

Calgary, Edmonton and Lethbridge, Alta., have applications in the works.

Alternative approach to illicit drug use

Johnson stressed that organizers view the site as a "public health initiative" that will benefit people who use drugs and the public alike.

"I'm not going to try to convince people that drug use is OK," he said. "Whether you agree with it or not, this is going to reduce the harms, reduce the impact on your community."

There's no hard and fast opening date for Toronto's three federally approved supervised injection sites, the first of which is expected to open some time this fall, he pointed out. Because of that uncertainty, Johnson said he's "terrified" the unsanctioned site will be dismantled with nothing to replace it — a possibility given they're lacking Health Canada's stamp of approval — leaving people without help.

For now he hopes law enforcement will continue to see the site as beneficial.

"We can't arrest our way out of this problem. It hasn't worked, it's not going to work. The drug war has been going on for decades and it's an abject failure," Johnson said.

"It's time we try something new."

With files from Adrian Cheung and Carly Thomas