The man at the centre of the ORNGE scandal says he doesn't know what went wrong with the troubled air ambulance service, but the government never told him he was veering off course. 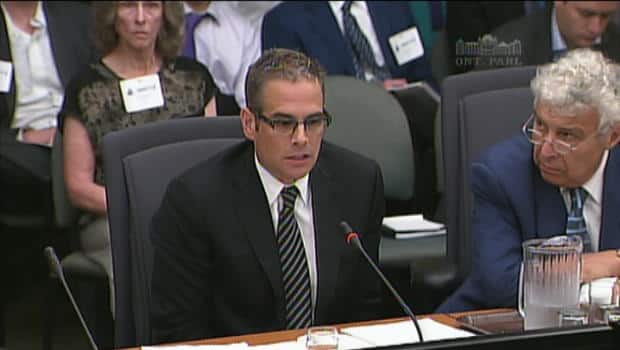 ORNGE CEO in the hot seat

The man at the centre of the ORNGE scandal says he doesn't know what went wrong with the troubled air ambulance service, but the government never told him he was veering off course.

Ousted CEO Chris Mazza says the Ministry of Health was fully informed about what he was doing at the taxpayer-funded organization, which is now under a criminal probe for financial irregularities.

ORNGE never stopped keeping the government abreast of what it was doing, an emotional Mazza told a legislative committee Wednesday.

"At no point did we become a rogue organization," he said with his lawyer by his side.

And if Health Minister Deb Matthews had told him to change direction, his response would have been "Yes ma'am," Mazza said.

His testimony flies in the face of the government's version of events. Matthews testified that executives misled her and she had no control over ORNGE because her hands were tied by a poorly structured performance agreement.

"It's very apparent that this government has circled the wagons and is throwing everybody else under the bus, including you," said Progressive Conservative Frank Klees.

"I have been naive in my understanding of how big the bus is that rolled over me," Mazza replied.

Matthews conceded that the government — as well as Mazza and ORNGE's board of directors — bear some responsibility for the mess.

"We all own a piece of this," she said. "And I think Dr. Mazza owns a significant piece of it."

But the mastermind behind ORNGE was at a loss to explain what went wrong at the organization, which has been mired in controversy for months amid allegations that public money was used for personal gain.

His "life's work" to transform Ontario's "dysfunctional" air ambulance service into a world-class organization wasn't about personal gain, but a desire to help patients in the wake of his son Joshua's death in 2006, he said.

Yet he defended a generous $1.4-million compensation package that he acknowledged "may seem excessive."

The decision to hide it from public view may have been "ill-advised," he added.

But the government didn't show any concern about his salary, Mazza testified. He didn't demand the pay increases; they were given to him by ORNGE's board of directors who were guided by their compensation advisers.

"It is my understanding that those decisions were made using data and compared my responsibilities and obligations to other similar companies and their executives," he said.

"I regret it has been a lightning rod for controversy…The trouble it has caused is extensive and unfortunate."

Mazza said he also received $500,000 from ORNGE as part of a multi-year "incentive plan," as well money to cover "difficult housing circumstances." He also received $250,000 as a "special bonus" in 2011 for the work he'd done to date.

He denied he got a job for his girlfriend — Kelly Long, a former water-ski instructor — who quickly climbed ORNGE's corporate ladder to junior executive. She earned all the promotions through her own hard work, he said.

Mazza also refuted one of the most explosive allegations: that he masterminded a kickback scheme with an Italian firm that sold ORNGE a fleet of new helicopters.

"I have never, nor would I ever, receive such a thing," he said.

He denied public dollars were "siphoned" to ORNGE's complicated web of for-profit companies, many of which were controlled by top executives, including himself.

However, the committee has heard that ORNGE — which received about $150 million a year from the government — has no other source of funding.

Auditor general Jim McCarter has criticized the governing Liberals for failing to oversee ORNGE, despite giving it $730 million over five years and allowing it to borrow another $300 million.

Many of the more than 30 witnesses have pointed the finger at Mazza for the controversy that's been a major embarrassment for the minority Liberals.

Mazza described as brilliant but volatile

Former employees have described Mazza as "impressive," "brilliant" and a "visionary," but also a tyrant whose volatile temper exploded when they didn't do what he wanted.

Mazza insisted that communication lines with the government were always open, with regular briefings on ORNGE's progress.

"I have only ever tried to do my very best for the patients and people of Ontario," he said.

Mazza said he was introduced to Premier Dalton McGuinty at a fundraiser, where he talked to him for 15 minutes about his ideas for ORNGE.

The introduction was made through Alfred Apps — a man with strong ties to both the Ontario and federal Liberal parties — who was working as a lawyer for ORNGE at the time. But Mazza said he couldn't remember the date of that meeting.

His testimony proves that the government is equally responsible for the massive waste of public funds, said Klees.

"(Matthews) said that Dr. Mazza left because of the decisions that he made," he said.

"The minister should leave because of the decisions she made to simply allow this to continue."

Mazza on the verge of tears

Mazza appeared to be on the verge of tears at times during his testimony, particularly when he was asked about patients who died while waiting for an air ambulance.

The committee had heard numerous stories about understaffing by ORNGE and helicopter interiors that were so badly designed paramedics often could not perform CPR on patients.

Mazza said the interiors were not "completely terrible" and insisted that every death was of great concern to him.

The tone during the six hours of testimony grew combative at times, with Mazza's lawyer, Roger Yachetti, interjecting several times to object to questions about his client's conduct. Mazza called some of the comments "personally wounding."

His appearance was a long time coming. Mazza took medical leave last December when stories about ORNGE's questionable business deals made headlines and hadn't been seen until now.

Two Speakers' warrants were issued to compel him to testify before the committee, but his appearance was put off because two psychiatrists declared him medically unfit to testify.

He denied using his serious emotional problems to avoid the committee, who tried to get him for weeks.

Mazza, who was joined by Long and members of his family, wouldn't answer questions from journalists outside the committee room, saying only, "I'm exhausted, I'm exhausted."