Toronto City Hall, Union Station, the Ontario Legislature and other locations in the city are in a heightened state of security following the shooting in Ottawa. 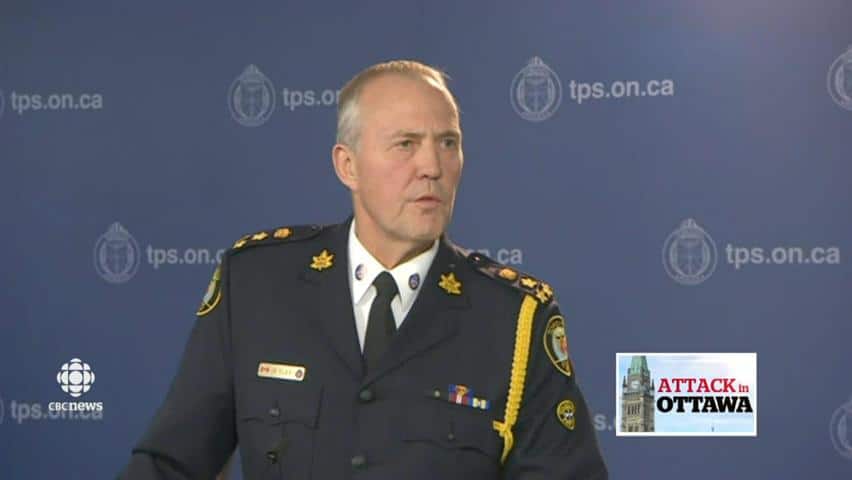 6 years ago
2:24
Toronto takes extra safety precautions after deadly shooting 2:24
Toronto City Hall, Union Station, the Ontario Legislature and other locations in the city are in a heightened state of security following Wednesday morning's shooting on Parliament Hill in Ottawa.

Police Chief Bill Blair told reporters at an afternoon news conference there is "no credible threat here in the city of Toronto."

But, he added, Torontonians will notice a "very visible police presence" in the city.

The situation is "all hands on deck," Blair said.

"We have a responsibility to reassure [citizens] of their safety by being visible," he said.

"Our belief is that people who are using violence to undermine democracy want us to be silenced. And we refuse to be silenced," she told reporters.

She later issued a statement expressing her condolences to the friends and family of Cpl. Nathan Cirillo, the 24-year-old victim, as well as all those injured or suffering in the shooting’s aftermath.

"Ontario’s first responders are doing an incredible job to put an end to this terrible event and keep the people of Ottawa and all Ontarians safe," she said, recognizing that some first responders, security personnel and police force members "bravely put themselves in harm’s way."

"The province will work closely with other levels of government and continue to monitor events," she said.

Deputy Mayor Norm Kelly echoed earlier sentiments that there was no credible threat to the provincial capital.

"Right now, in Toronto, there is nothing to suggest there is any threat," he said at city hall. "But we are diligent."

Kelly, who has a background in history, pointed to the FLQ crisis in Quebec in the 1970s — "a spot of trouble," he said — as evidence that calm is preferential in times of uncertainty.

"The police are very capable in Toronto. We have one of the most sophisticated police forces in Canada," he said.

Prime Minister Stephen Harper cancelled an afternoon events in Toronto where he was scheduled to meet Nobel Peace Prize winner Malala Yousafzai at a school.

Mayor Rob Ford tweeted the following message in response to the shooting: "The thoughts and prayers of the people of Toronto are with Ottawa right now, and with the family of our fallen soldier."

Here's how various agencies and locations have responded to news of the shooting and how it may affect their security and operations:

Greater Toronto Airport Authority: We are "aware and monitoring closely and working with Transport Canada, which at this point has given no direction that anything should change in terms of airport security." They will post updates on Twitter (@Toronto Pearson) and on their website if there is any change.

The TTC: Chair Maria Augimeri tweeted the following: "The TTC has taken immediate steps to review & heighten its security awareness and vigilance levels."

Billy Bishop Toronto City Airport: "We are monitoring the situation."

Union Station:  "We are reviewing security protocols and are working with our law enforcement partners."