Residents urged to close windows, doors due to thick smoke

Nearby homes on Argyle Street were evacuated after the blaze broke out shortly after 5 p.m.

Investigators with the fire marshal's office expected to stay at the scene overnight to try to determine the cause, Powell said. 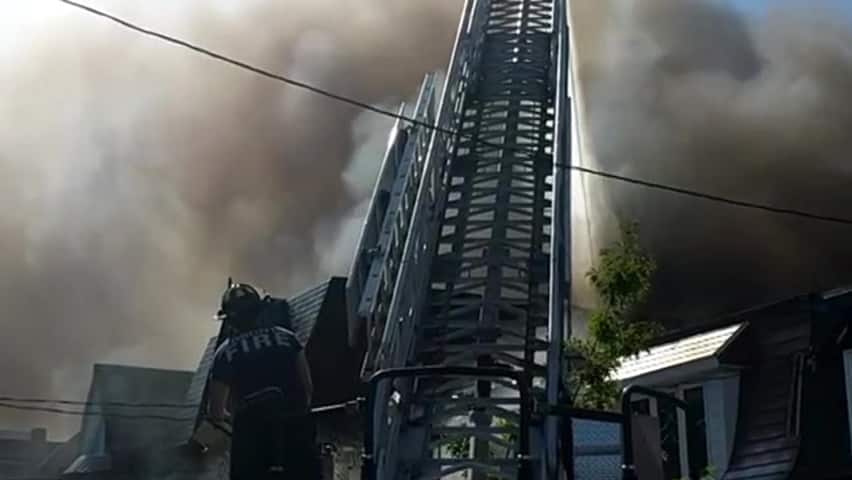 House fire near Ossington and Dundas

4 years agoVideo
0:37
Toronto firefighters attempts to put fire out at home near Ossington and Dundas. 0:37

When fire crews first arrived on the scene, they found tall flames and thick smoke pouring from several homes, a fire spokesperson said. They were able to keep it from spreading to many adjacent properties.

"The nature of the street — as you can see with the wires behind me and the tightness of the homes — made this a very difficult fire to fight," Deputy Chief Jim Jessop told CBC Toronto earlier Wednesday.

None of those who lived in the homes were injured in the fire, he added.

There was, however, one firefighter who had to be treated for heat exhaustion.

"It was contained by an exceptional job by our crews," Jessop said.

'Heat was so intense'

"It looked like a jet of smoke and flames coming out of a hole in a roof," he told CBC Toronto.

By the time he and other residents worked to ensure neighbours, including an elderly woman, were safely out of their homes, the fire had intensified and the heat was unbearable, he said.

"The heat was so intense. We couldn't even stand in front the houses anymore."

Residents are being urged to keep their windows and doors closed due to the thick, billowing smoke.

West Neighbourhood House at 248 Ossington Ave. is opening its doors to anyone displaced by the fire, Coun. Mike Layton said in a tweet.

Smoke visible elsewhere in the city