Southern and eastern Ontario is hit with a mix of snow and rain, creating a sloppy mess throughout the region. 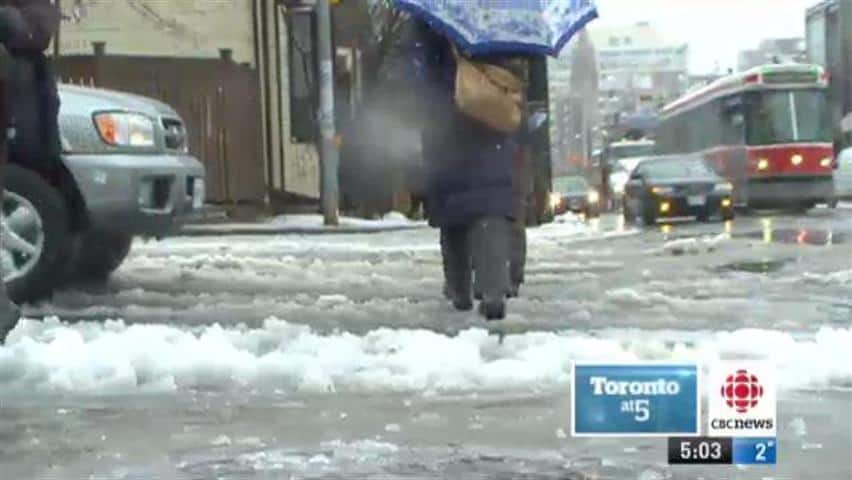 Southern and eastern Ontario were hit with a mix of rain and wet snow, creating a sloppy mess throughout the region on Wednesday.

"We had a real mixture of wet snow [and] rain between 10 p.m. and about midnight," said Environment Canada meteorologist Geoff Coulson on Wednesday.

"In terms of total accumulations, there's about four to five centimetres in the [Toronto] downtown core, higher amounts outside toward Pearson airport.

"There may only be about 10 centimetres on the ground in some areas, but it’s very heavy stuff."

The snow that fell was mixed with rain and extremely wet and heavy.

Matt Galloway, host of CBC Toronto's Metro Morning show, asked his listeners to come up with the best word or term to describe the sloppy snow (see poll in this story).

Up to 15 centimetres of snow was expected in several eastern and central Ontario cities — including Ottawa, Belleville, Kingston, Peterborough and Haliburton — by Thursday morning, Environment Canada said.

Windsor had 11 centimetres of snow by Wednesday morning, and about 20 centimetres was possible for Ottawa as the storm moves east.

"It’s a slushy mess for pedestrians and motorists on roads and sidewalks," she said. "For most areas in the downtown core, the snow has turned to rain and that's creating flooding."

With the slush clogging some street drains, flooding was reported on the Queensway, the Bayview-Bloor ramp and the Jameson Avenue ramp onto the westbound Gardiner Expressway.

Despite the wet conditions, police were not reporting a major increase in collisions on the highways. OPP Sgt. Dave Woodford said people seem to be listening to the advice of police and are slowing down.

"I was out at 4:30 this morning and there was a lot more traffic than you'd normally see, so people were getting out early and taking their time getting where they're going," said Woodword. He said there were some collisions but "nowhere near the numbers that we saw in the last heavy snowfall a couple of weeks ago."

Woodford said drivers need to remain vigilant and slow down, especially when traffic becomes lighter later in the morning.

The southern Ontario branch of CAA said on Twitter it had already received 1,000 calls for service by about 9 a.m.

The weather led to the cancellation of dozens of flights at Toronto's Pearson International Airport.

The departure board was showing at least 106 cancelled flights through the late morning and at least 80 cancelled arrivals. Most of the affected flights are to and from U.S. destinations coping with heavy, wet snow that has clogged roads and airports and been blamed for at least three deaths.

Porter Airlines issued a travel advisory for flights out of the Toronto island Billy Bishop Airport, Chicago and Windsor.

Both airlines are recommending travellers check their flight status before heading to the airport.

The weather also snarled public transit, with systems in both Toronto and Hamilton reporting delays on Wednesday morning.