Premier Dalton McGuinty says a $1-billion extension to Highway 407 will be owned by Ontarians, though it will be financed and built by the private sector. 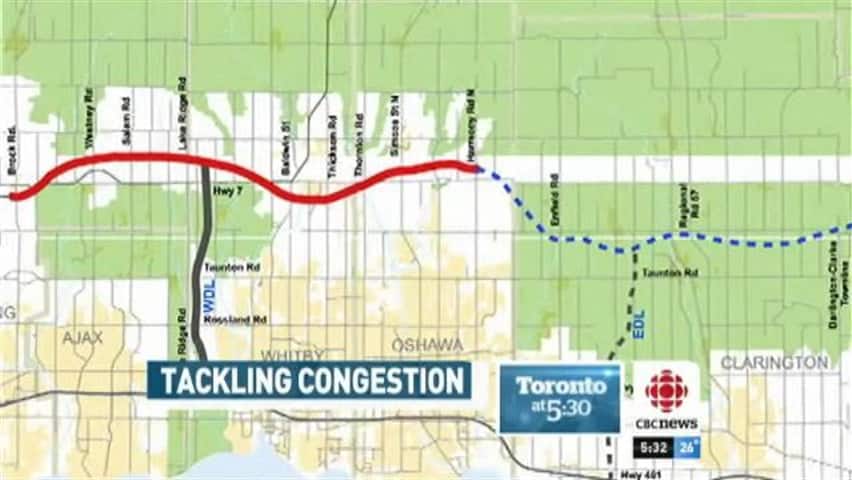 Premier Dalton McGuinty says a $1-billion extension to Highway 407 will be owned by Ontarians, though it will be financed and built by the private sector.

The project will extend the toll highway 22 kilometres from its current end point at Brock Road in Pickering to Harmony Road in Oshawa. It will also add a 10-kilometre north-south connection to Highway 401, which will be located east of Lake Ridge Road in Pickering.

The government estimates that the project will create 900 construction jobs and will be completed by the end of 2015.

A group known as the 407 East Development Group General Partnership, which is a 50/50 joint venture between SNC-Lavalin and Cintra Infraestructuras, will design, build, finance and maintain the new strip of highway. But Ontario will own it.

"We’ll finance this through our tried and true alternative financing and procurement methodology," McGuinty said. "What does that mean? We have the private sector build it for us, finance that for us. We repay them over time."

McGuinty said that drivers will not need a separate transponder to travel on the government-owned portion of the highway, instead using the tracking devices they already have in their possession.

"There would be just the one bill that you’d receive, just the one transponder that’s required as you move from one highway to the extension," said McGuinty.

The premier also said that the toll fees on the Highway 407 East would not be any higher than those charged by the private company that operates the existing 407 ETR.

"We’ll consult with Ontarians, I can assure you that they will not be higher than the 407 ETR tolls," he said.

"And we hope that they’ll be lower, but I’m not making any commitment in that regard at this point and time. But we want to ensure that they are reasonable."

After that east-end extension is completed, the government plans to extend the highway again, so that it can link to Highway 35/115 in Oshawa, in a second phase that would be completed by 2020.