Young voters: Why living in your parents' basement is bad for democracy

Students in Hamilton are doing what they can to drive up the painfully low youth vote before the provincial election — but they have a battle ahead of them. Each generation votes at lower levels than the one before it, and that's in part because it's taking longer for young people to "grow up." 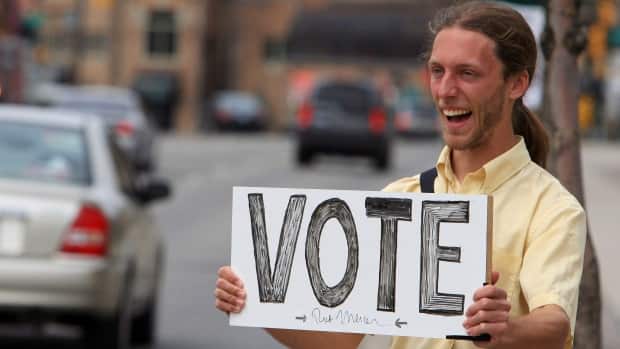 Getting out the youth vote

7 years agoVideo
0:51
The McMaster Students Union vice president of education says the most important thing young people can do is get informed. 0:51

Students in Hamilton are doing what they can to drive up the painfully low youth vote in the weeks leading up to the provincial election — but they have a battle ahead of them.

Though studies have shown they could drastically change the country’s political landscape, young people are often missing at the polls. Each generation votes at lower levels than the one that came before it, a trend being magnified because it's taking longer for young people to "grow up" and take on the many aspects of what's traditionally considered adulthood. It's taking on those roles that have typically turned young non-voters into voters.

Elections Ontario doesn’t measure voter demographics by age, but in the last federal election, only 37.4 per cent of eligible voters in the 18 to 24-year-old demographic voted, according to Elections Canada.

Falling voter turnout is not just an issue with young people. In 2011, a record low number of Ontarians voted – less than half of eligible voters cast ballots in that provincial election.

So what is the root of the problem, and what will it take to get young people voting?

Don’t mistake the void of youth at the polls as apathy, says Rodrigo Narro Perez, a member of the student union at McMaster University in Hamilton. “Just because students don’t vote, doesn’t mean they don’t care.”

But at least some people don’t care, according to Statistics Canada. In a survey after the last federal election, 30 per cent of people aged 18 to 24 who didn’t vote said it was because they just weren’t interested — and that was the most common reason given. Another 23 per cent reported they were too busy, while 11 per cent said they were out of town.

We are a generation that’s thirsty for knowledge. All it takes is ten minutes and explaining the facts.- Rodrigo Narro Perez, McMaster University Students Union vice president of education

The process itself can be daunting for first-time voters, Narro Perez says, and so the McMaster Students Union has been pushing information to students where they live – online. Using the #MacVotes hashtag on Twitter and Facebook, the union is giving information to students about how to vote, where to vote, and what the issues are in the upcoming provincial election. MSU also hosted a debate for candidates from Ancaster-Dundas-Flamborough-Westdale Wednesday.

But while MSU’s efforts are admirable, the union’s reach doesn’t extend too far off campus to get other young people involved. “The youth vote is a huge issue,” McMaster political science professor Peter Graefe told CBC Hamilton.

According to Elections Canada, as each new group of eligible voters reaches the age of 18, its members vote in fewer numbers than the generation that came before. Only 35.6 per cent of eligible first-time voters cast a ballot in the last federal election, which is roughly half the rate of a generation ago. Once people transition into adulthood and start paying taxes, turnout levels at the polls tend to increase. But that transition is taking longer than ever to complete, according to Statistics Canada.

Young people today are living with their parents longer, and tend to be more highly educated and attend school for more years than their parents did. Marriage ages are also rising, fertility rates are dropping and the age at which women have their first child is increasing.

Ontario had the highest proportion of young adults still living at home in 2011 at 50.6 per cent. So with all those delays to “traditional adulthood,” voting falls by the wayside, too. And while this generation of young people might be more educated, they weren’t really taught to vote, Graefe says. “We teach people to add and read, but we don’t really teach them to vote.”

But if they did vote, the political landscape could change drastically, according to Nanos Research. Working with former parliamentary budget officer Kevin Page on a project aimed at engaging youth in the political process, researcher Nick Nanos mined data from his daily polling during the 2011 campaign as well as research done for the Institute for Research on Public Policy to answer the question: What if 60 per cent of young people had actually voted?

'Get in the game or stop complaining'

“Young people voting does have a significant impact on the direction the country takes,” Graefe says. “Do you want to rule your own life? You can be involved in the decision or you can’t.

“Get in the game or stop complaining.”

But the onus to get people voting isn’t all on young people, Graefe is quick to add. “It can create a self-fulfilling circle in which parties don’t speak to young people because they don’t go out and vote, and young people don’t vote because they’re not being spoken to.”

Most party platforms seem geared to loyal voters and swing voters instead of new voters. Narro Perez said if they’d take the time to really speak to young people, they’d probably be shocked by the results.

“We are a generation that’s thirsty for knowledge. All it takes is 10 minutes and explaining the facts.”