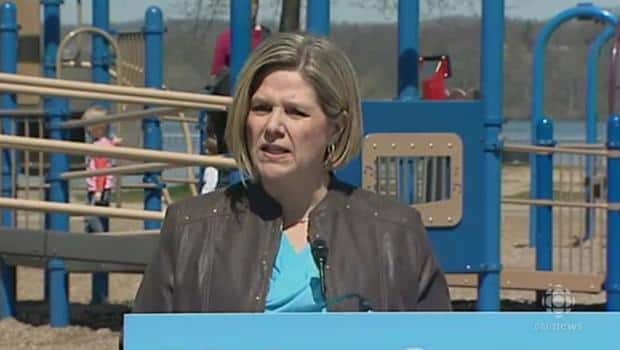 The money, to be spent next year, would go toward "stabilizing" a system destabilized by the Liberal government, Horwath said.

"We see over a dozen child-care centres minimum across the province that are poised to close," Horwath said.

"That is not good enough. We can't have families in those communities having their child-care centres close and not having options for their children."

The Mother's Day announcement came at a water-front park, where the NDP leader chatted briefly with parents and kids enjoyed the sunshine.

Licensed child care in Ontario is the responsibility of municipalities, so it would be up to them to spend the money properly. Horwath said an NDP government would not mess with the system as it is.

"We're not going to totally revamp the entire system and do direct funding -- that doesn't make any sense," she said.

Currently, the province gives local governments about $970 million a year to spend on day care.

Horwath said the overall provincial spending would be indexed to inflation.

The measures amount to a "simple step" to ensure more affordable day-care spaces are retained, she said.

"We don't believe that child-care centres should be at risk of closing," Horwath said.

Liberal Premier Kathleen Wynne said if Horwath really cared about child care, she would have voted for the proposed budget rather than pull the plug on the minority government and spark the election campaign.

"We had proposed that we would actually increase the wages of child-care workers," Wynne said.

"It would have been a very good idea for them to have supported the budget because there was support in that budget for child care."

Horwath did say her party would push for higher wages for child-care workers.

The New Democrat campaign was set to head Sunday to Thunder Bay as Horwath tries to persuade voters to give her party a chance to form a government when they vote on June 12.

Polls suggest the Progressive Conservatives under Tim Hudak and Liberals under Kathleen Wynne are well ahead of the NDP, which has been propping up the minority Liberal government.

Voters can stick with an "out-of-ideas" Liberal group plagued by scandals and waste, pick a Conservative group that is "out of touch" with people in Ontario or vote New Democrat, Horwath said.