Kathleen Wynne denies privatization is part of the Liberal plan 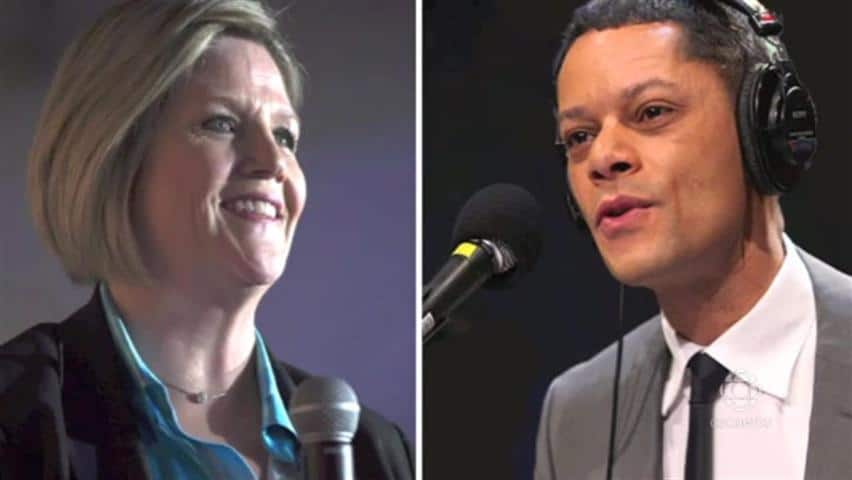 7 years ago
8:11
Ontario NDP leader Andrea Horwath talks with Matt Galloway about why she could not support the budget proposed by the Ontario Liberal Party. 8:11

Horwath made the comment Monday on CBC Radio's Metro Morning during an interview with host Matt Galloway.

Galloway asked Horwath why she decided to not support last week's Liberal budget, a move that forces a June 12 provincial election. After pointing to what she said are a string of broken Liberal promises, Horwath talks about the Liberals' transit plan. Here's how the conversation unfolded:

Horwath: "We know that the government we had was on a track to privatize the TTC. We don't think that's the right thing to do."

Galloway: "Hold on, where did you hear anything about privatizing the TTC?"

Horwath: "That's part of Kathleen Wynne's plan in terms of the way that they're going to move forward with expansion of the TTC. It's very clear that that's the case. What we're talking about is prioritizing the transit needs of Ontarians. We think that in the downtown, we need to get that relief line put to the top of the agenda. We've actually talked about how we can bring in new revenues to make that happen by pulling in the business community and asking them to pay a share of that cost."

Galloway: "I don't think I've ever heard anything from Kathleen Wynne about privatizing the TTC though."

Horwath: "You do need to look at what their plan is."

Horwath: "If you look in their budget, their plan talks very much about alternative service delivery and P3s [public-private partnerships] and all of these kinds of things, which are exactly that. In fact there are very serious concerns about how do you actually mix or join projects that are going to be run privately versus ones that are currently being run publicly. These are big questions that I have real concerns about."

Although the province has partnered with some private companies to build the new Eglinton-Crosstown line, there is no mention in the Liberal budget of an outright privatization of the TTC.

On Monday, Wynne called Horwath's claim about any Liberal plans to privatize the TTC a "made up comment" and said she had "no idea" where Horwath is getting the idea.

Horwath's use of the word "privatization" to characterize the Liberals transit strategy is similar to an ad produced by the Amalgamated Transit Union (ATU), which represents Toronto transit workers.

The ad, which you can watch here, uses a cartoon caricature of Wynne jogging in a spoof of a Liberal campaign ad that shows Wynne running down a rural road.

The ATU ad says Wynne is in favour of "public-private partnerships" and claims she "plans to privatize our public services" and is "going to hand off our future transit to profit-driven corporations."