'We're all in it for the kids': Education unions lead thousands in job action at Queen's Park

Thousands of striking teachers and education workers rallied at the Ontario Legislature on Friday in a demonstration they say is intended to send a message to Premier Doug Ford and Education Minister Stephen Lecce.

Thousands of striking teachers and education workers rallied at the Ontario Legislature on Friday in a demonstration they say is intended to send a message to Premier Doug Ford and Education Minister Stephen Lecce.

"We're all in it for the kids," head of the Ontario English Catholic Teachers' Association Liz Stuart told CBC News.

"I am really hoping that the government really understands that this is about all of our members. We have 30,000 of them here today."

In all, nearly 200,000 teachers and education workers demonstrated in 72 school boards on Friday, affecting nearly 5,000 schools and two million students across the province. 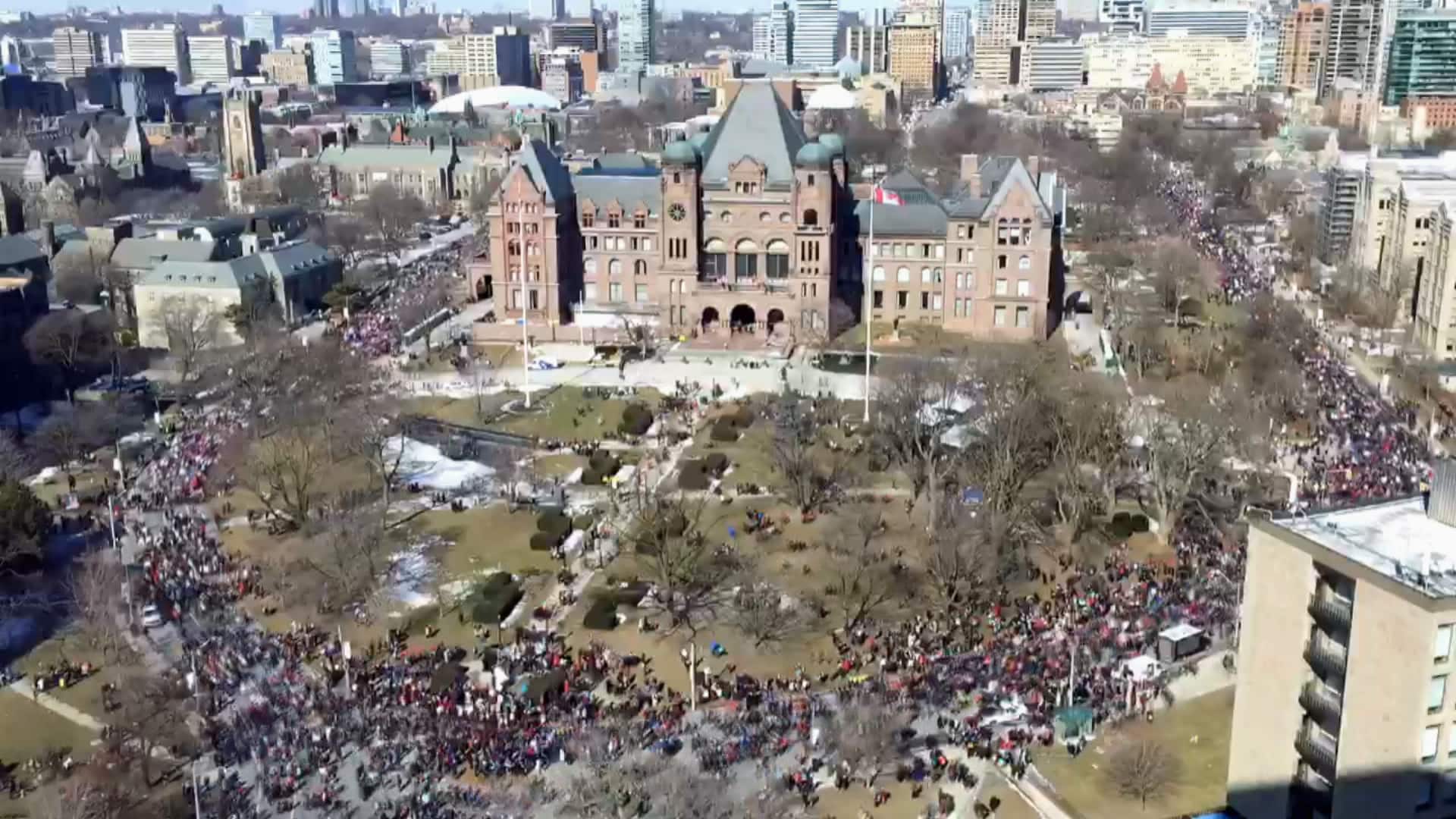 2 million students left out of class

Today's mass protest at the legislature coincides with a province-wide strike that has left about two million students out of class.

Stuart said the rally shows that education workers are largely united in their job action.

"I am really hoping that the government really understands that this is about all of our members," she told CBC News.

Bischof said Friday's action demonstrates unity and should force the government back to the bargaining table.

"We understand what's at stake, and it's not about today, it's not about tomorrow — it's about the future and making sure that this Ford government understands exactly what the consequences of their actions will be if they don't stop on this path," Bischof said.

"When you have a government that plays politics with publicly funded education … then you need to show unity, and that's what we're doing — the four education unions in a historic action, unified in defence of public education."

The OSSTF leader said this has left him with the belief that the government is playing games with the unions.

"Apparently the education minister has sent signals to the other unions that he's prepared to make some moves that would be productive. We haven't met since Dec. 16 and I wonder what kind of game he's playing that he hasn't sent the same signal to our mediator," Bischof told CBC News.

"Why do the students that OSSTF members serve not deserve the same effort from the minister that the students who are served by the other union members get?"

'It's difficult on the kids,' parent says

Neha Hans, while dropping off her son at a day camp in Mississauga, said she hopes the unions and the government come to a resolution soon.

"It's been ... bad because we just have to find day camps every single time to get to, and it's difficult on the kids," she told CBC News.

"One day it's school, the other day it's not. Getting them settled back in school is very, very difficult."

This is the first time since 1997 that teachers and education workers from Ontario's main education unions will all be out of their classrooms on the same day, the unions say.

"I think the mission of the government, given the parents of this province have been very clear that they don't want their children's education to be compromised and they don't want their lives to be upended, is that all parties have an obligation to stay at the table and get a deal," Lecce told Metro Morning.

Lecce said he wants union leaders to heed the concerns of parents who want their children in school.

"We want to get a deal. Obviously this cannot go on forever and I think the people of this province have been clear that this is having real impacts on their lives. We do not lose sight of that," he said.

Members of the four unions in Peel Region also plan to hold a mass picket, with teachers set to form a 30-kilometre line from Caledon down to the lakeshore in Mississauga.

Lecce has been signalling flexibility on class sizes — one of the most contentious issues in ongoing negotiations, particularly for secondary teachers. He has said he would rather make further moves on class sizes than on compensation for teachers.

Lecce has since offered to instead increase average high school class sizes to 25 and require two online learning courses, but the unions have been pressing for no class size increases and for no mandatory e-learning courses.

All the teachers' unions are asking for around two per cent in annual salary increases, while the government won't budge beyond offering one per cent. It passed legislation last year capping wage hikes for all public sector workers at one per cent for three years.

The teachers' unions and several others are fighting the law in court, arguing it infringes on collective bargaining rights.

CBC ARCHIVES: Watch what the Ontario teachers strike looked like in 1997 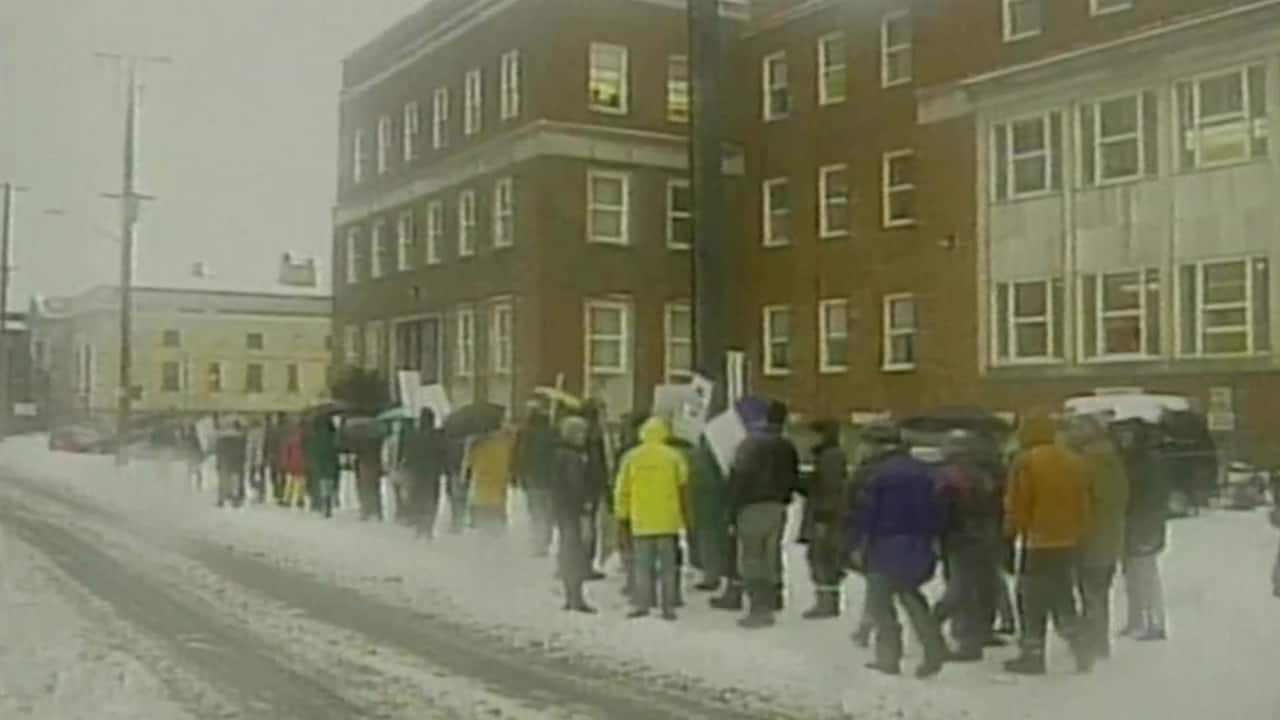 23 years agoVideo
2:43
Teachers strike illegally to protest a government bill that would give the province control of education. 2:43

With files from Desmond Brown, Linda Ward and The Canadian Press