Ontario's four largest teachers unions say they will stage a joint one-day strike across the province on Feb. 21 if there's no breakthrough in contract talks with the Doug Ford government.

Ontario's four largest teachers unions say they will stage a joint one-day strike across the province on Feb. 21 if there's no breakthrough in contract talks with the provincial government.

The action — the first since 1997 that will see teachers and support workers from all major unions go on strike on the same day — would put some two million students out of class.

Spokespeople for the four unions say teachers will walk off the job in protest against cuts to public education made by the Ontario government.

"What you're seeing here is a show of unity between all of us," said Harvey Bischof, president of the OSSTF. "The different things on the table hardly matter in the face of a government that wants to slash fundamental supports for all of our students and that's why we're prepared to stand up together."

The announcement came as the heads of the four unions attended an event with Ontario Education Minister Stephen Lecce at a downtown Toronto hotel. The talk to the Canadian Club at the Royal York Hotel was about preparing students for the jobs of the future.

Contract negotiations between the Progressive Conservative government and the education unions have largely stalled with several major issues unresolved, including the role of seniority in hiring practices, class sizes, funding for students with special education needs and mandatory e-learning.

The unions are also asking for around two per cent in annual salary increases, while the government won't budge beyond offering one per cent. It passed legislation last year capping wage hikes for all public sector workers at one per cent for three years. The teachers' unions and several others are fighting the law in court, arguing it infringes on collective bargaining rights.

All four of the biggest unions are currently involved in job action of some kind, included rotating one-day strikes in school boards throughout the province.

On stage at the event, Lecce called the decision to hold a joint strike an "irresponsible choice."

"I think the students of this province should be in class. I think this escalation has happened far too often in our province," he told the audience.

"We see so many young people whose lives are being upended academically. We have report cards not being completed in full. And there is obviously an impact with respect to extracurriculars."

He said the government has made several notable concessions during negotiations and repeated his call for a private mediator to take over from a mediator appointed by the Ministry of Labour.

Watch: Here's what the four union leaders behind the upcoming strike had to say after Lecce's speech 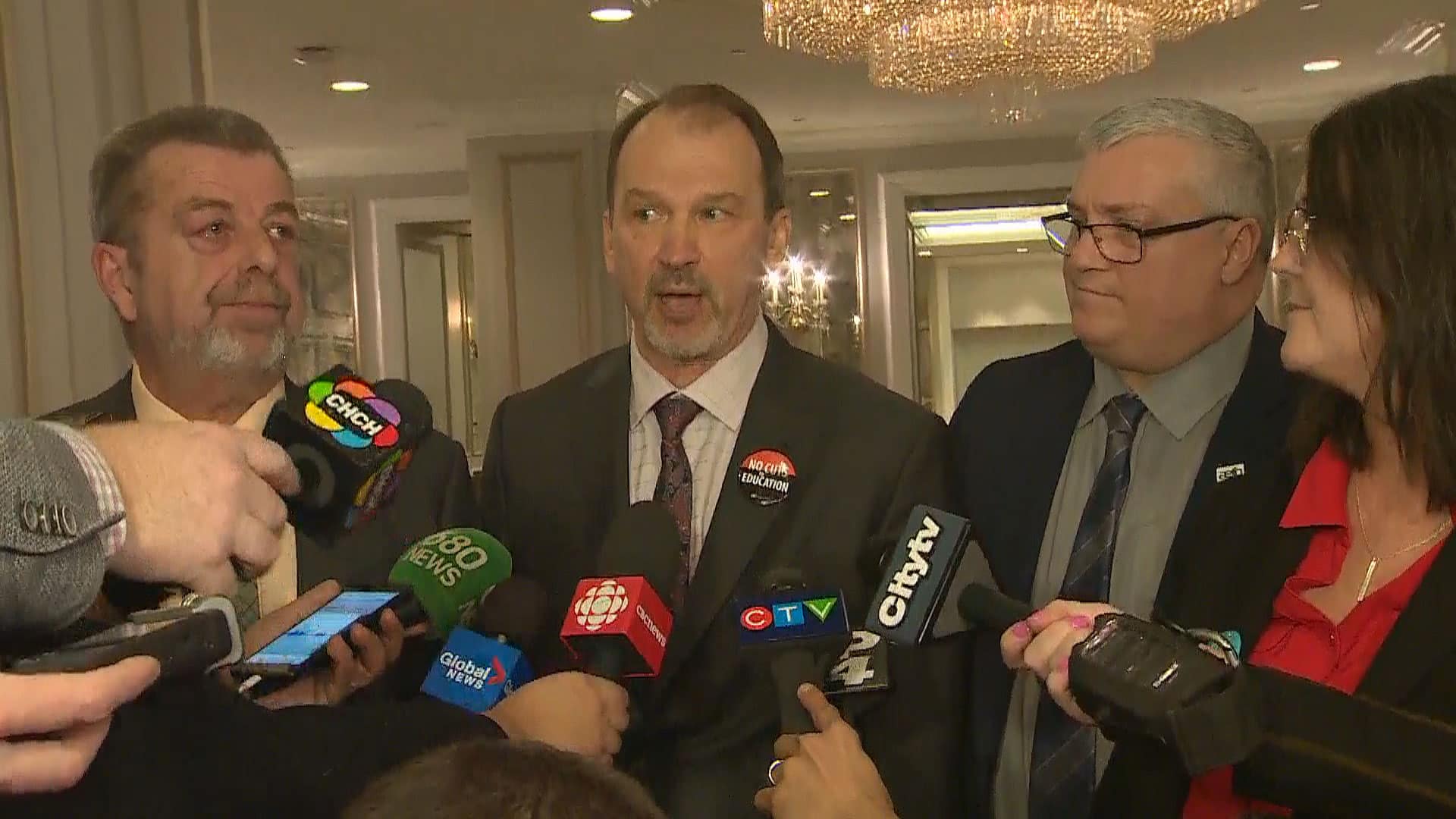 11 months agoVideo
1:42
The heads of four Ontario teachers' unions blasted the province after a speech by education minister Stephen Lecce 1:42

"It's just absolutely appalling. Once again, this minister lies to intelligent people in that room, and to everyone watching," said ETFO President Sam Hammond.

"It's time for [Premier] Doug Ford to remove this minister and get on with what needs to happen."

Meanwhile, ETFO members protested outside the hotel where Lecce was speaking.

Many of those demonstrating are Designated Early Childhood Educators (DECEs). Those who spoke to CBC Toronto said they don't trust Lecce's commitment to maintain the province's full-day kindergarten model past next year.

They’ve now moved to directly in front of the Royal York hotel. The doorman is getting an earful of whistles and “Lecce’s got to go!” chants <a href="https://t.co/d6arN1CLo4">pic.twitter.com/d6arN1CLo4</a>

"Today we are here trying to fight for our profession, really," said Andrea Spagnuolo.

"This has been 10 years of our lives. It has been a struggle," she said.

Ontario's full-day kindergarten program was implemented in 2009. Every kindergarten class in the province currently has a teacher and DECE.

Lecce put a commitment to maintain the model in a letter that was reportedly presented at the bargaining table last month. However, ETFO president Sam Hammond has said that the union will not consider the matter resolved until there is specific language in the next collective bargaining agreement.

Doug Ford is tight-lipped about dispute with teachers

ETFO also held a provincewide strike Tuesday, and today its teachers are on strike at about a dozen boards and authorities, including the Toronto District School Board.

The union representing teachers in the French system has agreed to return to the bargaining table today, a day ahead of a planned provincewide strike, making it the only teachers union currently in talks with the government.