Ontario reported 44 new COVID-19 deaths of residents in long-term care homes on Sunday, bringing the total number of deaths in homes across the province to 954 since the outbreak began.

The Ontario health ministry also reported 434 new cases of COVID-19. The number is less than the daily increase reported on Saturday, when the ministry said the province had 511 new cases.

CBC News, however, has counted a total of 1,308 deaths using data from local health units. Some 12,005 people have recovered.

Ontario also reported that 1,010 people have now been hospitalized with COVID-19, an increase from 977 reported hospitalizations on Saturday. Some 232 patients are in intensive care, while 174 are on ventilators.

Another death at Eatonville Care Centre

On Sunday Eatonville Care Centre said another resident who tested positive for COVID-19 has died.

Executive Director Evelyn MacDonald said a clerical error in how they report these numbers was fixed this morning, and as a result, the total number of COVID-19 associated deaths at the centre remains unchanged at 39.

The number of confirmed positive COVID-19 cases stands at 144 residents and 101 staff.

The following long-term care homes have reported at least 30 deaths each:

The new numbers come as Ontario prepares to relax some lockdown rules on Monday and allow businesses, such as car dealerships and gardening centres, to reopen with some restrictions.

The province says the businesses must follow strict health and safety rules, including enforcing physical distancing.

You can find the full list of businesses and further details about the plan at the link below.

In a statement, Loblaws said the employee hadn't been in the store, located near Dupont and Christie streets, since April 26.

The store reported its first positive employee case on April 17.

Meanwhile, Longo's says it will now require shoppers to wears masks while in its stores.

"As much as we want to see your smiles, as of May 4th we require Guests to wear a face mask or covering while in store. Please help do your part in keeping the community safe," the company said in a tweet Sunday.

The portable test was called a "game changer" by health officials because it reportedly could deliver on-location results in under 60 minutes. Further upgrades to the test made by the Ottawa-based company promised to reduce that time down to 30 minutes.

According to Spartan, Health Canada's concerns stem from the efficacy of the swabs the testing unit uses — and not with the machine itself.

The rapid-testing device will now be used for research purposes only, Health Canada says.

The Ontario Police Memorial Foundation held a virtual ceremony on Sunday due to COVID-19 restrictions to honour officers who have died in the line of duty.

In a news release issued on Sunday, Mike Adair, president of the Ontario Police Memorial Foundation, said the ceremony began at 11 a.m. ET and would give viewers a moment of silence "to reflect and remember all of our brothers and sisters from police services close to home and across Canada."

Adair said the ceremony is in memory of the 267 Ontario police officers who have died in the line of duty.

If it weren't for restrictions placed upon the province as a result of the COVID-19 pandemic, the annual ceremony would likely have drawn in-person crowds to the Ontario Police Memorial site, located on Queen's Park Crescent in Toronto, Ont.

Instead, five lone pipers played Amazing Grace, which was streamed live. Viewers were encouraged to stay home and tune in online.

"Today and everyday throughout the year we remember and honour those brave men and women who have died in the line of duty," Adair said. 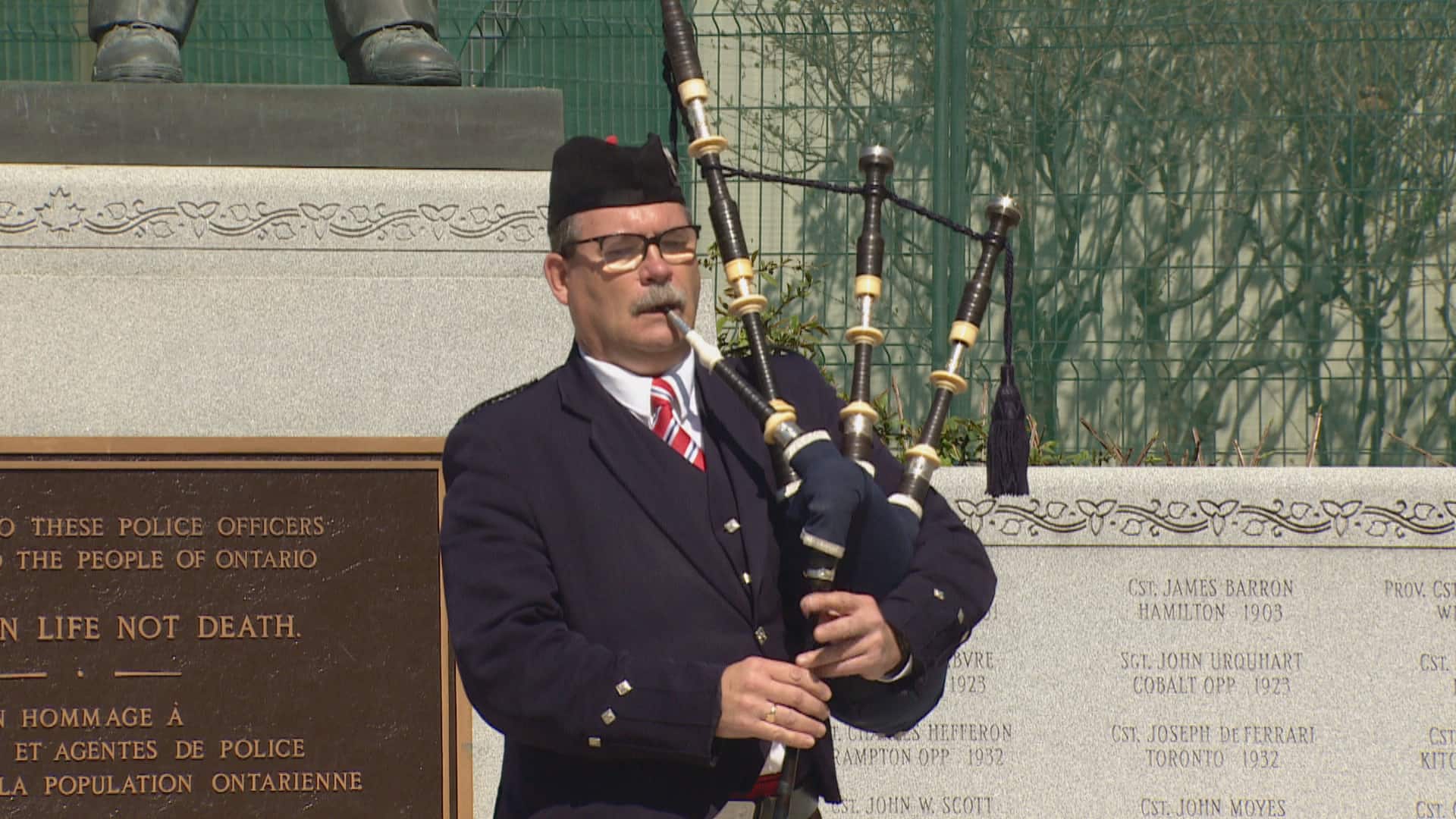 10 months agoVideo
2:20
Bagpipers perform Amazing Grace at the Ontario Police Memorial site on Sunday in remembrance of the 267 Ontario officers who have lost their lives in the line of duty.  2:20

"We stand together to express our respect, our gratitude and our utmost appreciation to the families of those officers who have made the ultimate sacrifice."

The foundation also started a social media campaign that encourages supporters to play or sing Amazing Grace, while practicing social distancing, and post to their social media accounts using #HeroesInLife.

Several police forces from across the province have already participated in remembrance of their fallen officers.

Health officials are urging Ontarians to stick to physical distancing measures Sunday during some of the nicest weather cities in the province have seen in months.

"I don't mind people going outside, people getting exercise, but plan it. Don't just go out and go to the most crowded places," said Chief Medical Officer of Health Dr. David Williams.

But with warm weather comes spring flooding — something Premier Doug Ford said the province is prepared to handle.

"As the weather gets warmer, flooding is top of mind for many and it's top of mind for us because we have all witnessed the devastation that flooding brings with it," Ford said at a news conference at Queen's Park on Saturday.

Ford noted that at least 10 regions in Ontario last year declared states of emergency due to flooding. He said the province prepared a flooding plan in March, and under that strategy, emergency staff are on standby to sandbag and evacuate areas as needed.

"With everything that is happening this year, it's more critical than ever that we're ready for this season," Ford said.

With files from The Canadian Press, CBC Ottawa