Ontario Premier Doug Ford called anti-lockdown protesters at Queen's Park on Saturday "a bunch of yahoos" and said they were being "selfish" and "irresponsible" for demonstrating against provincial emergency orders in place to slow the spread of COVID-19.

Protest on legislative grounds drew about 200 at its peak

Ontario Premier Doug Ford called anti-lockdown protesters at Queen's Park on Saturday "a bunch of yahoos" and said they were being "selfish" and "irresponsible" for demonstrating against provincial emergency orders in place to slow the spread of COVID-19.

Scores of people gathered on the Ontario legislative grounds on Saturday afternoon to call for an end to the shutdown of many services, businesses, activities and public spaces across the province amid the pandemic. At its peak, the protest drew about 200 people.

Ontario has been under a state of emergency for 40 days and much is closed as the number of COVID-19 deaths, hospitalizations and cases continues to rise.

Ford, when asked by a reporter at a news conference about the protesters, blasted their actions.

"These people that are absolutely irresponsible, it's reckless to do what they're doing. Personally, I think it's selfish," Ford said.

The premier said front-line health-care workers at Toronto hospitals near the legislature are working long hours to protect the community and to tend to people who have fallen ill due to the virus. The vast majority of people are staying at home and practising physical distancing to do their part as the curve flattens, he added.

"We are better than this as a people and as a province."

The premier added he would like the economy to restart more than anyone else, but he will not put people at risk for the sake of the economy and he pleaded for people to be patient. "We'll get there."

On Saturday, the Ontario health ministry reported a total of 811 deaths from COVID-19.

The ministry said 245 people are in intensive care units. The total number of cases in the province sits at 13,995, which is 3.5 per cent increase over the number reported on Friday.

According to a count by CBC News, which involves tracking numbers through public health units, there have been 901 deaths in Ontario.

'Cure is worse than the cause,' organizer says

In an email to CBC Toronto before the protest, an organizer of the anti-lockdown protest at Queen's Park said the event would be peaceful. The organizer explained what the group would be trying to do at the event while people with COVID-19 are fighting for their lives in hospital.

"The cure is worse than the cause," the email reads.

"Health and economics are not mutually exclusive, We are fighting for small business, the working class, the poor, students, victims of domestic abuse, people waiting for elective medical procedures, the right to peaceful assembly, the list is endless. We choose freedom, liberty and the balance of mental and physical health," the email continues.

The organizer said protesters would be "encouraged to follow health guidelines with common sense." At the rally, some protesters appeared to be keeping two metres apart from one another, while others did not.

Mayor John Tory agreed with Ford, saying the quickest way to end the shutdown is for people to stay home.

"Gathering in a large group is to thumb your nose at well accepted science and professional health advice. It risks undoing the good we have all sacrificed to achieve together. In fact it runs the risk of making the shutdown longer," Tory said in a statement on Saturday.

Tory added he is well aware that the city measures, bylaws and closures are challenging for residents.

"I understand how frustrating the city's lockdown measures can be and I too want the city to open back up as soon as it is safe to do so. But in order to do that, we need to be sure that the virus is contained. This is about saving lives from a very deadly virus." 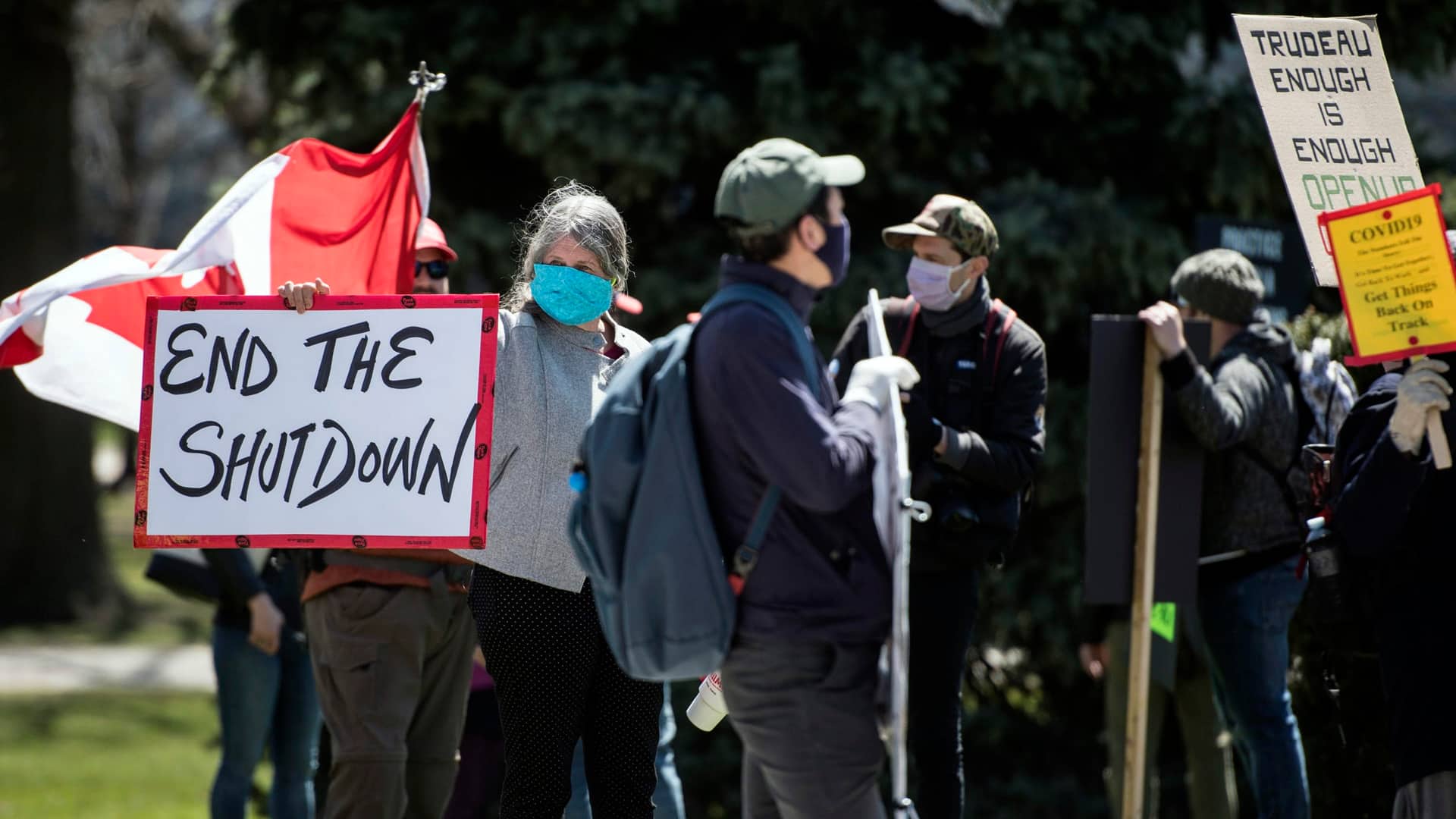 10 months ago
1:30
Ontario Premier Doug Ford said protesters who rallied against lockdown measures in Toronto are "irresponsible" and "reckless." 1:30