An expert panel has advised the Ontario government to tie the province’s minimum wage to the rate of inflation. 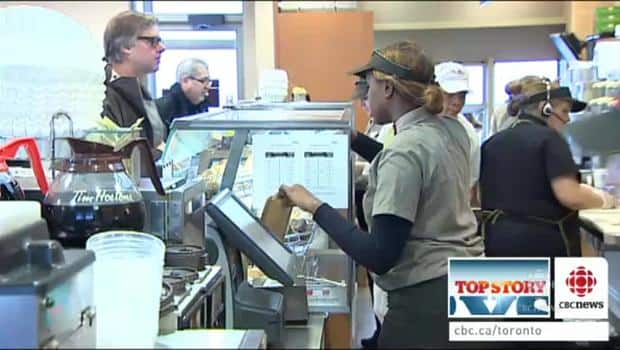 7 years agoVideo
3:15
A panel has advice for how Ontario should increase the minimum wage. 3:15

An expert panel has advised the Ontario government to tie the province’s minimum wage to the rate ofinflation.

Ontario’s minimum wage has stood unchanged for nearly four years, after it was raised to $10.25 in March of 2010.

That puts the province in the middle of the pack across Canada, where workers can be paid an hourly wage of between $9.95 in Alberta and $11 an hour in Nunavut.

Last summer, the Ontario government had asked the panel to review the process of setting the minimum wage.

On Monday, the panel released its report, which made four recommendations:

Premier Kathleen Wynne says an increase to the province's minimum wage is coming, but she has yet to make it clear when precisely that will happen and how much it will change.

The premier also said she believed that basing the minimum wage on the Ontario Consumer Price Index was fair.

"It takes the decision out of the realm of political whim and puts it into the realm of some kind of relationship with the way the economy is growing," she said.

Business groups warn a hike in the minimum wage will only hurt the very people it's supposed to help by driving up costs, resulting in fewer jobs.

Workers’ rights groups and health-care professionals have recently called on the government to raise the minimum wage rate to $14 an hour and ensure its future increases are tied to inflation.

The Canadian Press has reported that the province will move to retroactively raise the minimum wage, based on the inflation that has occurred over the past four years.

A study last fall showed the number of minimum wage workers more than doubled since the Liberals were elected in 2003 to nine per cent of Ontario's workforce in 2011.

Young people used to make up the bulk of minimum wage workers, but the data shows that by 2011, nearly 40 per cent were 25 or older.