Ontario's Liberal government is raising the minimum wage to $11 an hour effective June 1. 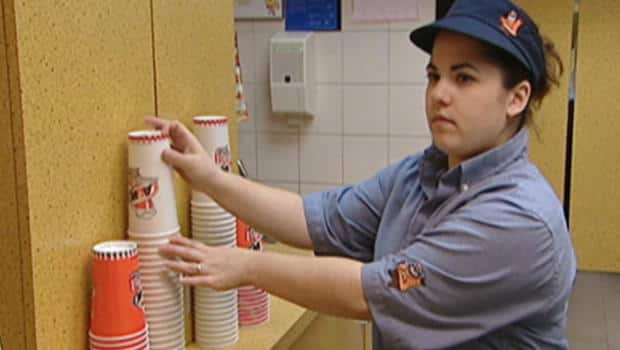 7 years ago
2:05
Ron Charles hears from the workers and the employers who pay the bills 2:05

Ontario's Liberal government is raising the minimum wage to $11 an hour, promising annual increases will be tied to the
rate of inflation, but critics say it's not enough to lift workers out of poverty.

Premier Kathleen Wynne announced the 75-cent-an-hour hike Thursday — the first minimum wage increase in the province since 2010 — calling it a "fair adjustment" that reflects the rise in the Consumer Price Index.

"I think the vast majority of people in Ontario understand that it's very difficult to make ends meet living on minimum wage, and that there needs to be a fair way of allowing minimum wage to keep up with the cost of living." she said.

Anti-poverty activists and unions have been demanding an immediate increase to a $14-an-hour minimum wage, but the government has said that would hurt businesses and end up reducing jobs.

The Ontario Convenience Stores Association admitted some of its members won't like the $11 dollar minimum wage, "but it's better than $14," said CEO Dave Bryans.

"Some of our members might be upset, but there's an adjustment period," he said. "Many people get their first jobs at convenience stores or the fast food sector, and I believe it's time that everybody had a fair wage."

However, the Canadian Restaurant and Foodservices Association warned the 75-cent hike will result in fewer jobs, especially among youth, calling it "unnecessary, tough for small business and counter-productive."

The Retail Council of Canada said it likes the plan to link future hikes to inflation, but complained about using the Consumer Price Index to determine a catch-up raise for the past four years.

Minimum wage 'not enough to live on'

Amelia White of Toronto, who works full time in a grocery store for minimum wage, said she will still have to look for additional work so she can pay the bills.

"I have to decide if I want to pay for rent, hydro or buy food. It's not enough to look after my child and it's not enough to live on," said White. "I pay my rent first and then I miss the bills and then I catch up the next month. It's a cycle that goes on and on and on, so you just have to do what you can."

Sonia Singh of the Workers' Action Centre said the $11 minimum wage is not enough for workers to live on.

The Progressive Conservatives warned the $11 minimum wage amounted to a seven per cent increase in business costs, and predicted it would result in reduced hours for workers or even job losses.

"If labour costs go up seven per cent, they've got to lay people off, putting them on unemployment," asked PC critic Jane McKenna.

Wynne promised legislation to tie all future increases in the minimum wage to the rate of inflation, a key recommendation of an expert panel, and said the new minimum wage would be announced April 1 each year and take effect Oct. 1.

The premier took a shot at the opposition parties as she urged them to support the legislation.

"It's a little shocking to me that we have a Conservative party that seems not to care, seems not to think that it's their
responsibility to have an opinion or to care about people making minimum wage, and we have an NDP that has no position on this," said Wynne.