Ontario Premier Doug Ford made a public plea on Sunday, asking people to "please go get a test" after the province fell short of its testing target for the seventh day in a row.

Ontario Premier Doug Ford made a public plea on Sunday, asking people to "please go get a test" — even if they are asymptomatic — after the province fell short of its testing target for the seventh day in a row.

"I am here to ask for your help today," Ford said on Sunday.  "If you feel you need a test, you'll be able to get a test. So please don't wait."

Ford touted the province's efforts to ramp up testing capacity at hospitals. He said Ontario has opened 129 COVID-19 assessment centres.

The announcement marks the first time Ford has told people without symptoms that they can get tested.

The premier said mass testing is the province's best defence against the virus, and said the only way for the province to reach testing capacity is for people to go to provincial assessment centres.

The messaging is a marked change from earlier Ministry of Health guidelines for the general public, which said that only people displaying one or more symptoms of the novel coronavirus should be tested.

WATCH | Ford stresses the importance of getting tested: 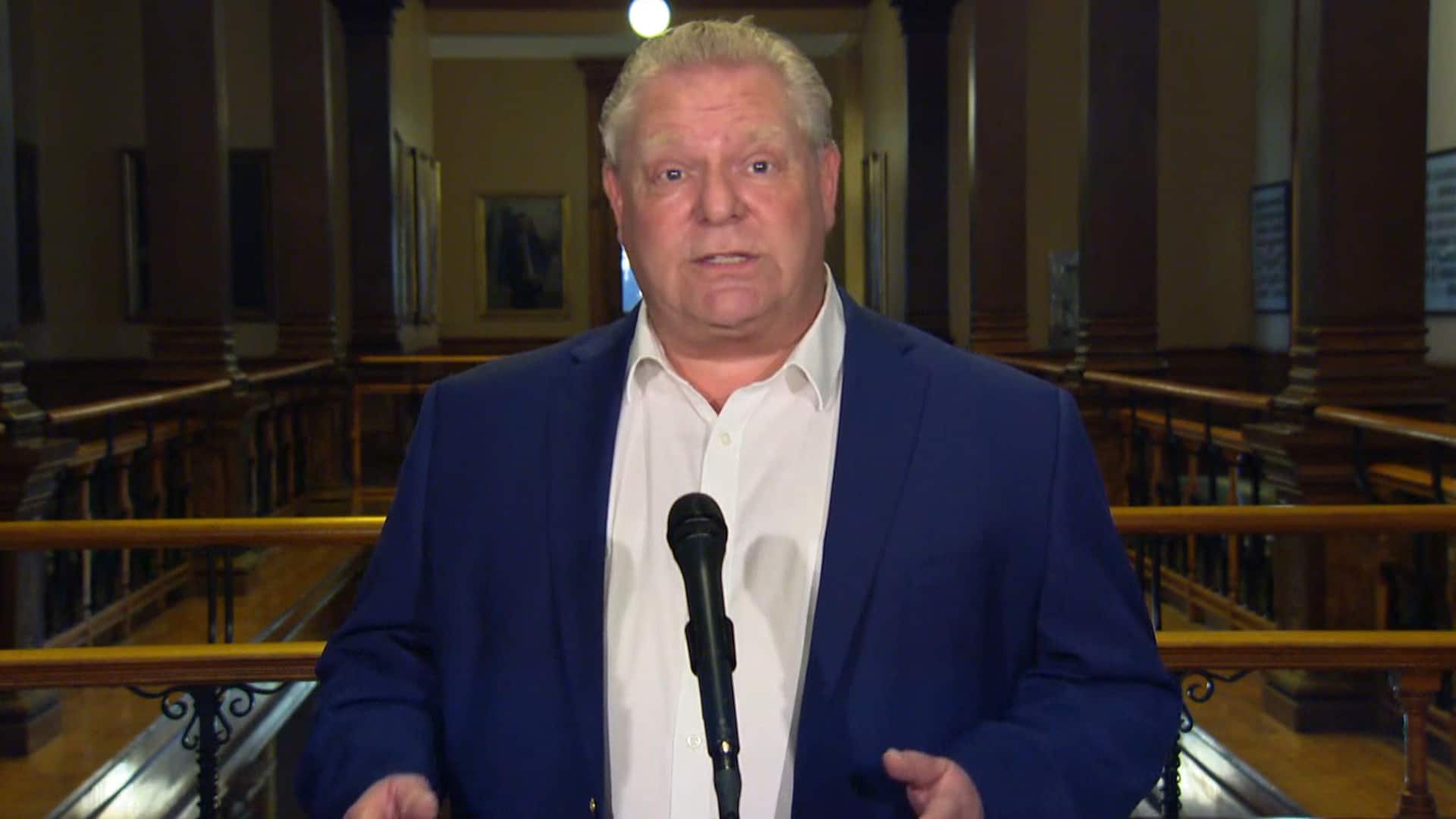 "I'm asking the people of Ontario, if you are worried if you have COVID-19, or that you've been exposed to someone who has COVID-19, even if you're not showing symptoms, please go get a test," Ford said.

Ford says the province will release a new "detailed" testing strategy, which will target various sectors and COVID-19 hot spots across Ontario.

"For weeks, Doug Ford's restrictive testing rules were turning people away from assessment centres," Horwath said in the statement.

Horwath is now calling for "systemic testing" of all asymptomatic people outside of assessment centres, saying the current method is "not enough."

"Testing needs to be expanded far beyond those assessment centres. That's Ford's job, and he's been negligent in failing to do it."

The announcement comes as Ontario confirmed 460 new cases of COVID-19 on Sunday, marking the highest new COVID-19 case count since May 8.

However, a count by CBC News, compiled from regional public health units, puts the current toll at at least 2,164 deaths.

The rise in cases represents a 1.8 per cent increase over Saturday's total, and the daily growth rate has hovered between 1.5 and 1.9 per cent over most of the last two weeks.

The Ontario health ministry said 878 people remain in hospital with the virus, a decrease of 34 from Saturday.

Some 148 people remain in intensive care, 104 of whom are on a ventilator.

Meanwhile, city officials in Toronto are condemning the "dangerous" behaviour of people who flooded a popular downtown park on Saturday, saying they could cause a surge in COVID-19 cases.

A statement released by the city late Saturday night says thousands of people packed Trinity Bellwoods Park on one of the first warm days of the year despite physical distancing regulations.

"Images today of thousands of people gathered in Trinity Bellwoods Park were unacceptable," the city said in a statement issued late Saturday evening.

"Gatherings like this, where people aren't keeping their distance from others, run the risk of setting Toronto back significantly in its efforts to stop the transmission of COVID-19."

Ford also condemned the behaviour on Sunday, saying images he saw of the park "looked like a rock concert."

"We opened the parks so people could get out there and enjoy the weather," Ford told reporters. "But the images I saw — we just can't have that right now because there is still a deadly virus among us."

"Like many others, I was disappointed and, frankly, saddened by what I saw," she told CBC News Sunday.

"Especially knowing the many sacrifices that have been made by Torontonians for the last several weeks and the progress we have made as a result of those sacrifices."

I understand that the photos of people in Trinity Bellwoods were disappointing today. It was a beautiful day &amp; we all want to enjoy our city together, but this could be selfish &amp; dangerous behaviour that could set us back. (1/3) <a href="https://t.co/cKVj0DdBhh">pic.twitter.com/cKVj0DdBhh</a>

De Villa said when there's congestion between people in one spot, the risk of transmission increases.

"Here's the thing. We also know that increasingly there are people who don't have signs or symptoms or have very mild signs or symptoms and they may inadvertently pass the infection from themselves to other people," she said.

"We're not saying don't go out, we're just asking that people do it in a responsible way so that we can better control the virus and then get our city back."