A group of alumni from one of Ontario's largest Christian summer camps is fighting to end an anti-gay policy that requires staff to condemn "homosexual and lesbian sexual conduct" if a camper asks them about it.

A group of alumni from one of Ontario's largest Christian summer camps is fighting to end an anti-gay policy that requires staff to condemn "homosexual and lesbian sexual conduct" if a camper asks them about it.

Volunteer and paid staff at Ontario Pioneer Camp in Port Sydney, Ont., must sign a code of conduct that says "homosexual and lesbian sexual conducts are not to be practised" and staff "should not in any way espouse, endorse or imply acceptance" of what the policy says "should be avoided."

'It really held me back for a number of years in accepting myself.' - Michelle Dowling, organizer of OnePioneer group

She helped start OnePioneer, the group pushing for LGBT inclusion at the camp they otherwise love.

"It really held me back for a number of years in accepting myself," Dowling told CBC Toronto. The 28-year-old was wrestling with her own sexuality the last time she signed the contract in 2011.

Ontario Pioneer Camp is a non-denominational evangelical camp run by the Inter-Varsity Christian Fellowship of Canada, which operates eight other camps in British Columbia, Alberta, Saskatchewan, Manitoba and Ontario.

But Ontario Pioneer Camp is the largest of them —  welcoming about 2,500 young people each summer.

Anyone volunteering or working for Inter-Varsity, whether at a camp or as part of a campus group, has to sign the same code of conduct, according to Al Anderson, Inter-Varsity's vice-president of ministry for camp and campus.

Dowling and a friend decided to collect stories from former campers and staff about their experiences dealing with LGBT issues at camp.

"I can imagine the shame and the hopelessness that kids feel when they're told that, you know, 'God didn't make you this way' or 'You haven't done anything wrong yet,'" said Dowling, because that's what she was told.

Dowling and her friend submitted 45 personal stories to Inter-Varsity in January 2016.

"We thought that after reading about the hurt that members of the camp community were feeling because of this policy and potential future impacts of losing more staff ... we thought that Inter-Varsity would want to dialogue with us and try to improve the situation."

But Inter-Varsity wasn't interested, Dowling said, so she and seven other alumni formed OnePioneer nearly a year ago to keep the conversation going.

The group wants to see staff trained on how to support LGBT kids and youth, and greater transparency about the camp's stance on homosexuality, if Inter-Varsity refuses to change it.

"We've come to the conclusion that we continue to affirm the values that we've had for the whole of our existence of Inter-Varsity — the traditional evangelical position," Anderson said. "There's no change coming."

What has changed, Anderson said, is how future staff will be trained.

We've come to the conclusion that we continue to affirm the values that we've had for the whole of our existence of Inter-Varsity — the traditional evangelical position.- Al Anderson, Inter-Varsity Christian Fellowship of Canada

"Our leadership and training has been redesigned to have a significant unit where people can enter into that discussion and wrestle with their convictions," said Anderson. "There's a lot of room in that community to have safe arguments and discussions around the topic."

But in the end, Anderson said, volunteers will still have to sign the existing code of conduct to work at camp.

"There are some people who would like to work for the camp, but they are not able to affirm the code of conduct, or the statement of faith, and so they're not able to," Anderson said.

Last summer the code of conduct was a topic of contention at the camp's program for girls aged 11 to 16.

Girls Camp nearly lost half of its volunteer leadership staff in the second week of camp, according to one of those volunteers.

The young women were told they would have sit down with a senior camp leader and confirm that they agreed with the beliefs in the code of conduct, or they'd be let go.

Rebecca Minielly, 22, assistant director of Girls Camp, was the first one to be interviewed, and the first to be fired.

"It was really painful and continues to be a day that hurts my heart," she said.

She and two other members of the leadership team were told they'd have to leave, but the next morning senior staff reversed their decision.

The three women were told they could stay for the summer, but that staff should stop talking about sexuality.

I was doing what I believed was right, but it hurt so much because I love camp and I love the work that I did there — it's home.- Rebecca Minielly, assistant director at Girls Camp summer of 2016

Minielly said staff felt the repercussions of those few days through the rest of the summer, which was "really difficult."

Of the 20 members of the leadership team at Girls Camp, Minielly thinks only about five or six will return this summer. And she won't be one of them.

"I feel very conflicted," Minielly said. "I still love camp, but in my heart, camp is separate from Inter-Varsity and different from that contract and that source of belief."

According to Anderson, a "weekend away" was held for this summer's prospective staff last weekend to "spend a day in Scripture around the topic."

The point was to let them know before signing up "where we stand, and why we have that conviction," said Anderson.

'You can't come to camp because you are gay'

Jodi McGeown, 36, another member of OnePioneer, is still deeply hurt by how her relationship with Ontario Pioneer Camp soured almost 10 years ago.

McGeown didn't grow up in a religious home, so going to camp as a teen in the '90s was a formative experience.

"It's just such a wonderful place," said McGeown. "It's where I became a Christian, where I developed my faith, where I understood the God that I know and who loves me for who I am."

But when McGeown got an unexpected call from a camp director just before she was supposed to return to camp in 2007, she was worried.

The director said there were some concerns from "higher-ups" about her volunteering as a counsellor for a week because she was living an "out lifestyle." 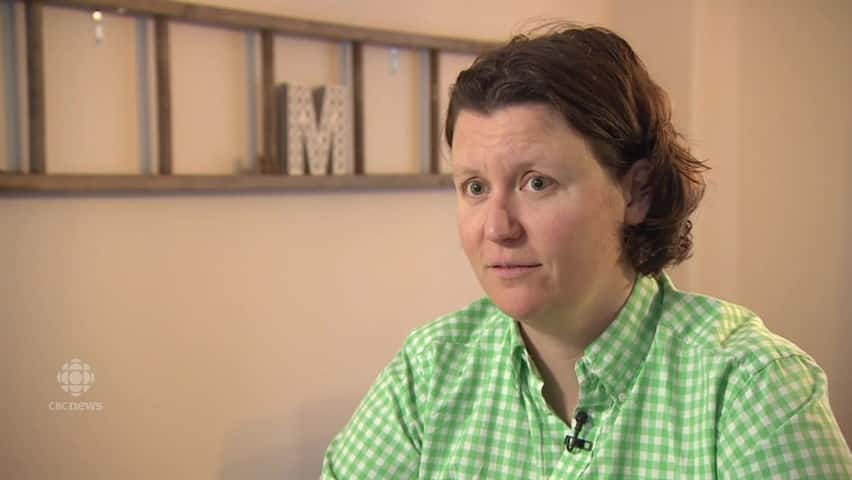 'You can't come to camp because you are gay': former camper told

4 years ago
1:18
Jodi McGeown was devastated when she was told she wouldn't be allowed to go back to Ontario Pioneer Camp as a counsellor because she was living an "out lifestyle." 1:18

"He said to me, 'What would you say if a camper asked you if you were gay?'

"I said that I would say yes. It's not in me to lie as a Christian."

That was a problem, the director told McGeown, because it's against the camp policy.

'This was my church, and to have it collapse on me so suddenly was incredibly painful.' - Jodi McGeown, former camper and staff at Ontario Pioneer Camp

McGeown was devastated, she said.

"This was my church, and to have it collapse on me so suddenly was incredibly painful."

Anderson acknowledged that people with a "history of being involved" with camp have decided that their convictions or beliefs are "not in sync" with Inter-Varsity's and it's "really hard when that happens, but it does happen from time to time."

Is the code of conduct legal?

So is Inter-Varsity's policy legal? Janina Fogels, senior counsel at the Human Rights Legal Support Centre, said that it depends.

As an employer of both volunteer and paid staff at Ontario Pioneer Camp, Inter-Varsity falls under the Ontario Human Rights Code, which protects people from discrimination in terms of jobs, housing and services.

"On its face it is discrimination," said Fogels, after reviewing Ontario Pioneer Camp's staff code of conduct, including its policy on homosexuality.

The issue, she said, is whether the camp would qualify for an exemption as a religious organization. The courts have developed a three-part test to figure out whether or not these exceptions are justified.

First, Inter-Varsity would have to show it is a religious organization, that its primary purpose is serving the interests of people "who are similarly identified" and finally whether the discrimination is necessary for someone to do the job.

"Is it a real qualification of the job to be straight and not have premarital sex yourself? Or to help campers who are maybe in similar situations?" said Fogels. "Is that really a true qualification of a job at the camp?"

Fogels said those are all questions that Inter-Varsity would have to answer if a case were brought against it. Then it would be up to the Human Rights Tribunal to decide whether the discrimination was justified.

Dowling, McGeown and the other members of OnePioneer don't want to go down that road. Instead, they've been concentrating on generating discussion within the Christian community.

So far they've participated in a couple of informal conversations with Inter-Varsity leadership, but have yet to meet organization to organization.

Dowling said that a meeting had been tentatively scheduled for April, but she recently heard that might not happen.

Anderson said that Inter-Varsity meets with OnePioneer regularly and that he's in the midst of planning the next meeting now.

If that's really, truly what they believe and what they want their camp to stand for, then I think parents should know that.- Michelle Dowling, organizer of OnePioneer group

If Inter-Varsity doesn't change its policy, members of OnePioneer hope the camp can at least become more transparent about its views.

"It's actually hard to find the code of conduct on their website," said Dowling. "If that's really, truly what they believe and what they want their camp to stand for, then I think parents should know that. So they can make their own decision about whether or not their kid should go there."

Anderson acknowledged it would be something to consider, but that "at least up to this point we've felt like it was an internal personnel document."