Toronto's medical officer of health Dr. Eileen de Villa and the city's board of health are recommending the provincial government provide financial support to employers to allow 10 days of paid sick leave during an infectious disease emergency such as the novel coronavirus pandemic.

Only 10% of working Canadians in low-wage or frontline jobs have access to the benefit, board of health notes

As Ontario officials mull a menu of possible restrictions to stem an unrelenting rise in COVID-19 infections, the province's largest city is calling on the government to implement paid sick days to ensure essential and frontline workers can afford to stay home if ill and bring down the rates of workplace transmission.

Toronto's medical officer of health Dr. Eileen de Villa and the city's board of health are calling for the provincial government to institute no less than five sick days for all workers after three months of employment and 10 days of paid sick leave during an infectious disease emergency such as the novel coronavirus pandemic.

At present, just 42 per cent of working Canadians currently have access to the measure, with that number estimated to be just 10 per cent among low-wage and front-line workers, the city notes in a new report.

"Workers – especially the essential and frontline workers we rely on every day – need to be able to stay home and self-isolate when they are ill, but many simply can't afford to," board of health chair Coun. Joe Cressy said in a news release Monday.

Also on Monday, Toronto Mayor John Tory announced at a news conference that a large new immunization clinic is opening next Monday at the Metro Toronto Convention Centre. The clinic will first of its kind for the city and will immunize those next in line for the vaccine, including frontline health-care workers in the shelter system and public health workers.

Head of Emergency Management Matthew Pegg said the site will be the first in a network of clinics expected to run out of various non-hospital facilities including community centres by April.

Pegg said the city was asked by the province  to accelerate the development of one such clinic with a test group of front-line healthcare workers. The clinic is expected to administer 250 vaccines each day for the first three weeks, followed by the second dose in the remaining three weeks.

After this six-week period, the city will work with the province to develop an immunization clinic "playbook" and will be ready to scale up its response as vaccines become availability to the city.

Toronto recorded 978 new cases of COVID-19 on Monday, de Villa said. There are also 433 people in hospital as a result of the virus with 115 of those in intensive care.

Another 14 people with the virus died, said de Villa, bringing the city's death toll to 2,064.

De Villa said the rising numbers are the result of people gathering in December and over the holidays.

Tory also warned of the concerning number of people in hospital and the increasing strain on the health-care system. 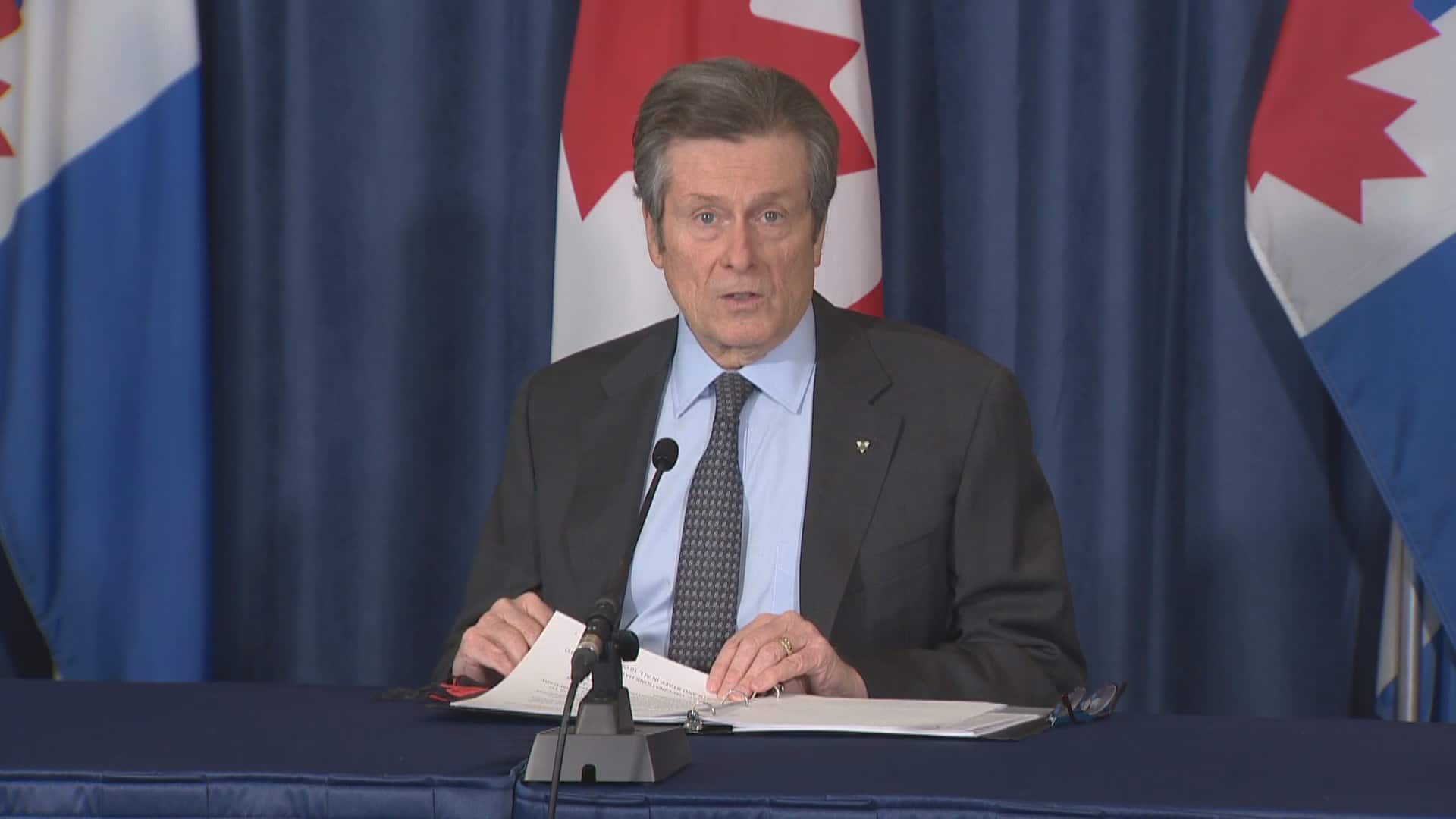 12 days agoVideo
2:01
Mayor John Tory warned of the concerning number of people in hospital and the increasing strain on the health-care system during a press conference Monday. 2:01

Asked if the city might move to implement its own curfew now that a province-instituted one has been ruled out, de Villa replied that the evidence around curfews isn't particularly strong one way or another, saying physical distancing remains the best defence against the virus.

"It's not just about restrictions, it's not just about limitations. it is indeed about individual choices but it's also about the supports that we can put in place,' she said, referencing sick leave and income support. "These are the kinds of things that I know will make a difference."

Tory added the province should implement more closures along the lines of what was seen in the first-wave of the pandemic.

Monday isn't the first time the city's board of health has called for paid sick leave. It previously called on the province to implement a program to ensure workers had access to the measure as early as May 2020.

In September, the federal government introduced the Canada Recovery Sickness Benefit, which provides $500 per week for up to two weeks to eligible workers. But while "an important step," the board notes, the benefit alone isn't enough.

The benefit, the board of health notes, pays less than a full-time minimum wage job, involves processing delays of up to four weeks, and doesn't guarantee job security for workers who use it.

On Monday, a group of Toronto and Hamilton-area mayors also called on the province to take action on sick pay. The group included Toronto Mayor John Tory as well as the mayors of Brampton, Mississauga, Oshawa, Vaughan and Hamilton.

"The Mayors and chairs repeated their insistence that the federal and Ontario governments sort out who should backstop workers who lose their pay cheque when they test positive for COVID-19. This continuing failure to backstop these workers is causing them not to get tested and in some cases to go to work sick for fear of not being able to support their families," the mayors said in a news release.

The city's recommendations are listed on the board of health's Jan. 18 meeting agenda. If approved, the recommendations will need full approval from Toronto's city council.