His father was to be checked hourly at his long-term care home. Instead, he died and wasn't found for 6 hours

Tavern Matchett's body was found six hours after he died at Extendicare Halton Hills in Georgetown, Ont., despite orders that he be checked hourly. His son, Joshua Matchett, is now calling for long-term care homes to face harsher punishments if they repeatedly violate provincial laws.

Joshua Matchett said he felt something wasn't right when he couldn't reach his father on April 11. He had called half a dozen times and checked the video camera he'd set up in the 92-year-old's long-term care room, but his father was never visible.

Late that afternoon, Matchett, who lives in Brampton, Ont., got a call from his brother telling him their father — Traven Matchett — had died in the bathroom of his room at Extendicare Halton Hills in Georgetown, Ont., about 50 kilometres west of Toronto.

Anxious to see his father's final moments, Matchett screened the video footage from his father's room. That's when he realized something was amiss.

From the video, Matchett said, it was clear that his father went to the bathroom at 9:51 a.m. ET.

The likely cause of his father's death would later be ruled as fatal cardiac arrhythmia from cardiovascular disease. But a report by an inspector with the Ontario Ministry of Long-term Care into the death found Extendicare Halton Hills "failed to protect [Traven Matchett] from neglect by staff."

The report also found that despite staff documenting that Matchett had been visited hourly that day — and even fed lunch — video evidence from the camera in his room showed that, in fact, he was not seen for six hours.

As a result, Extendicare Halton Hills received three written notices of non-compliance with Ontario's Long-term Care Homes Act. The LTCHA sets out minimum safety standards that every care home in the province must meet.

Data obtained from a CBC Marketplace investigation found it's not the first time Extendicare Halton Hills violated the act.

Between 2015 and 2019, the home was issued 125 written notices for violations of the act and had 19 repeat offences of the most serious infractions, such as neglect and abuse. That makes it one of the top 30 homes in the province with the most violations, according to the data compiled by Marketplace.

No one from Extendicare Halton Hills was available to speak with CBC for an interview about Traven Matchett's care.

In a statement, Extendicare said it does not comment on circumstances about specific residents or staff, but said in part: "We regularly update our policies and procedures to reflect the advice of ministry inspectors and provide education to our team members to reflect any issues that are identified in the course of an inspection."

Matchett said he installed a camera in his father's room in March 2019 after the senior, who suffered from early onset dementia, repeatedly complained about someone coming into his room at night.

Video footage shared with CBC News shows another resident entering the room shortly after the camera was installed. Matchett's father sits up in bed and tells the resident to leave.

As the other resident moves past him, the footage shows Matchett's father falling to the floor and hitting his head.

WATCH | Video footage from an altercation in Matchett's room: 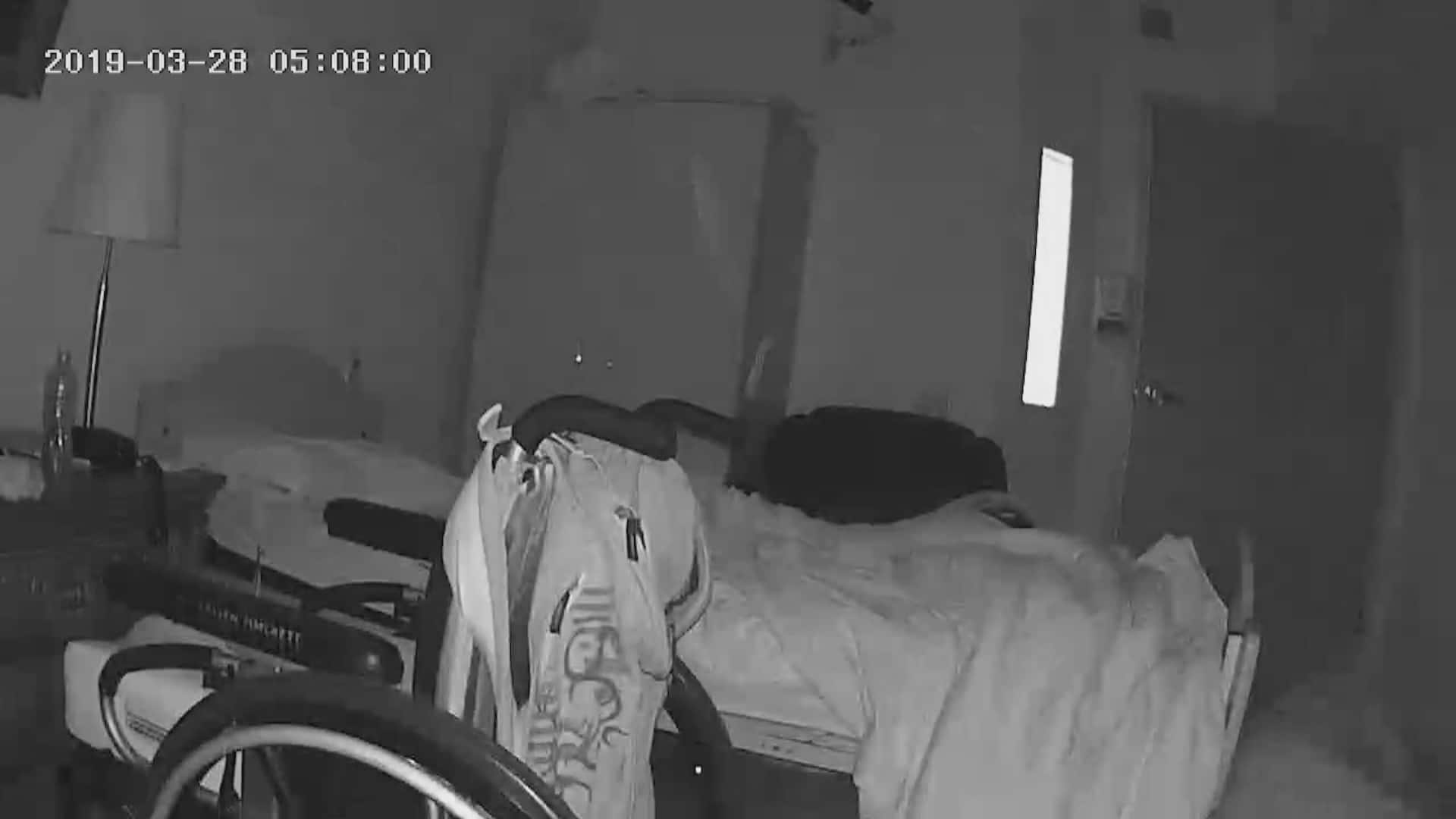 4 months ago
0:57
Footage from a camera set up in Matchett's room at the long-term care home shows another resident entering his room while he's sleeping. Matchett tries to get the resident to leave but falls and hits his head as she moves past him. 0:57

Matchett said his father had to be treated in hospital for his injuries.

Matchett filed a complaint to the ministry, and as a result, an inspector found the home was in violation of nine sections of the LTCHA.

The report noted the same resident who entered Matchett's room had been aggressive toward other residents on a number of occasions.

The inspector found the home "has failed to ensure steps were taken to minimize the risk of altercations and potentially harmful interactions between [the resident] and other residents."

The report also found the home failed to ensure that at least one staff member on duty was a registered nurse.

Matchett said his father started to regress after the altercation with the resident and would complain to family that he wasn't receiving prompt care. Under his care orders, Matchett's father was supposed to be checked every hour.

Footage from Matchett's room on the day he died showing he hadn't been checked on for about six hours was submitted as part of Joshua Matchett's complaint to the Ministry of Long-Term Care.

WATCH | Video footage from Matchett's room on the day he died: 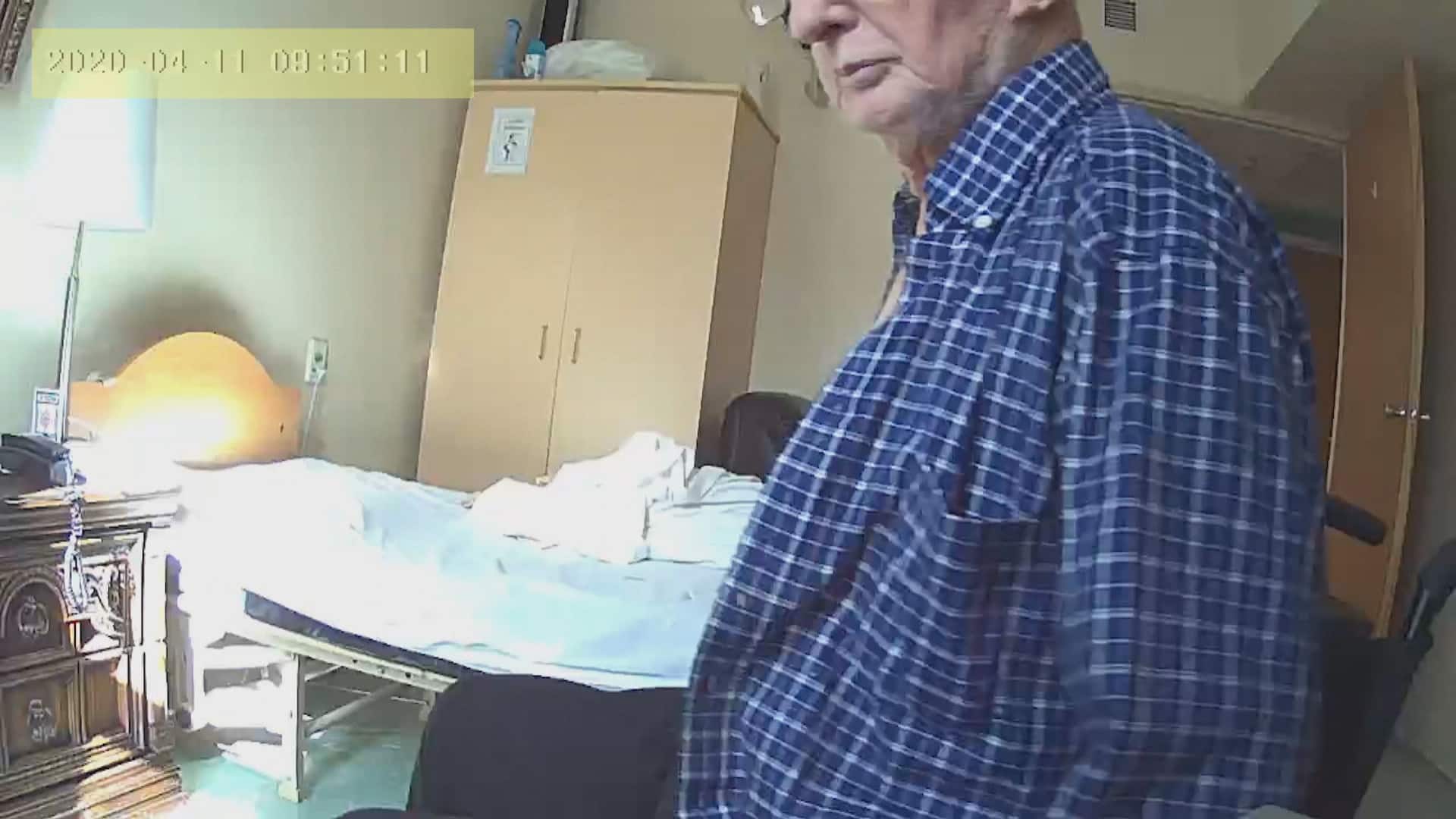 4 months ago
1:00
Footage from a camera set up in Matchett's room at the long-term care home from the day he died shows him going to the bathroom at 9:51 a.m. No staff member checks on him for roughly six hours until 4:57 p.m. 1:00

'They quite obviously neglected my father'

In the inspection report that followed, the ministry found that the personal support worker "had documented that they had conducted hourly checks and turned and repositioned [Matchett] when video surveillance showed that staff did not check on the resident."

The report stated that according to Matchett's file, he'd eaten "76 per cent" of his lunch and his full snack despite the fact that he never exited the bathroom after 9:51 a.m.

"The resident was found unresponsive in the bathroom six hours later without staff having seen or attended to the resident," the report said.

"They quite obviously neglected my father," said Matchett.

"The investigator's report says the staff members said my father ate lunch at 11:56 in the morning and 'He was happy and cheerful' while he did. And that stuck to me because you can't be happy and cheerful if you're not breathing."

When a home is found to be in violation of the LTCHA, the Ministry of Long-term Care can issue orders with which the home must comply — such as re-training staff or implementing new policies — but Jane Meadus, a staff lawyer and institutional advocate at the Advocacy Centre for the Elderly in Toronto, said those orders aren't always effective.

"There's really no reason for [LTC homes] to comply, frankly, because if they don't comply, the ministry just comes in again and just reissues the order," she said.

"And so, we see homes having violation after violation, order after order."

Meadus said she'd like to see repeat offenders hit with administrative fines or even be charged criminally.

"We've never seen a provincial offence laid against a home, even in quite egregious cases."

She said part of the problem is also funding, noting that long-term care homes don't often have the resources to respond to compliance orders. For example, when increased training is ordered, backfilling staff is an issue.

Minister of Long-Term Care Merrilee Fullerton declined to speak to CBC news for this story. In a statement to CBC News, the ministry said: "Repeated non-compliance is taken seriously by the ministry."

The ministry listed a series of tools at its disposal in cases where there are repeated instances of non-compliance.

One action the ministry can take is to refer the matter to the director of long-term care inspections who has the power to temporarily stop admissions to a home until it follows compliance orders. The inspections branch can also bring in its own manager to oversee operations at the home's expense.

In its statement, the ministry said that in March 2019, the director of long-term care inspections met with Extendicare Halton Hills regarding non-compliance and that since then, the home has been subject to "increased monitoring with 11 unannounced inspections."

The ministry said it is currently following up on three compliance orders. It's not known if these orders are related to the Matchett case.

According to the ministry's statement, "Ontario's long-term care home inspections continue to be the most rigorous in Canada."

In its statement to CBC News, Extendicare said that a new management team at its Halton Hills facility "is working to prevent similar issues from occurring in the future."

Joshua Matchett said he's not surprised by the history of violations at the home and that he's speaking out because he wants to see a change in the way those violations are dealt with.

"A much brighter spotlight has to be shone [on this issue] because I'm going to end up there," said Matchett.

"We're all going to be subjected to the system eventually."

Seven months after Traven Matchett's death, his son said the hardest part is knowing that it took video footage for him to finally understand his father's complaints about the level of care he was receiving.

"His last months he lived thinking his sons ... didn't believe him, that he was being neglected. I live with that every day."

Farrah Merali is a reporter with CBC Toronto with a passion for politics and urban health issues. She previously worked as the early morning reporter at CBC Vancouver. Follow her at @FarrahMerali