Ontario Liberals want to strip away most rules on partisan ads, AG says

Ontario's auditor general is stepping up her fight with the Liberals over government advertising, warning her office would be undermined by proposed changes to the regulations. 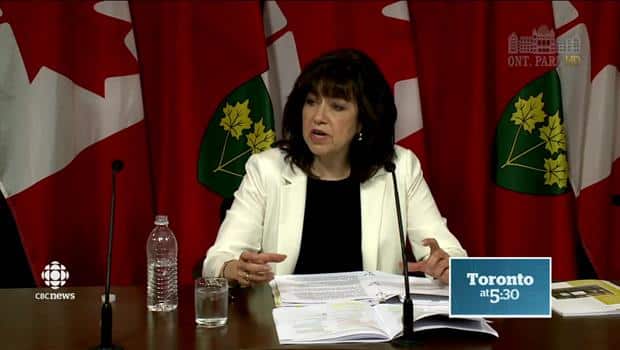 5 years ago
2:02
The auditor general is concerned about changes the governing Liberals want to make to the rules for government ads. 2:02

Ontario's auditor general is stepping up her fight with the Liberals over government advertising, warning her office would be undermined by proposed changes to the regulations.

Auditor Bonnie Lysyk says the Liberals want to do away with almost all the rules that aim to prevent taxpayer-funded partisan advertising by a government.

She says they want to replace her discretionary authority to reject government ads with "a narrow, new definition of what is partisan" that she fears could let all kinds of blatantly political messages be approved.

Lysyk says the changes open her office to "mockery" as an independent officer of the legislature that has to abide by a "precise list of government requirements for an ad" when she thinks those requirements are insufficient.

If the Liberal changes to the advertising act are approved, Lysyk wants to be relieved of her duty to review government ads before they can run.

Deputy premier Deb Matthews says the Liberals wanted to clarify the definition of partisanship in government ads, which she says will make the rules clearer.

"Ads were being rejected for reasons that didn't make a lot of sense," said Matthews. "We firmly believe that partisan ads must not be funded by taxpayers, so we're clarifying what that definition is."

The federal Conservative government's "Economic Action Plan" ads would not have been approved in Ontario, added Matthews.

Lysyk first accused the Liberals of trying to "gut" the government advertising act two weeks ago, and issued a special report Tuesday.

"We've been very careful over the years to balance the anti-partisan mission with the legitimate need of government to inform citizens about its programs, policies or services," she said.

"In the 10 years-plus since that law has been in effect more than 7,200 ads have been approved ... and fewer than one per cent have been rejected either for being partisan or not meeting another standard."