Revenues are off by more than half-a-billion dollars but Ontario's Liberal government remains confident it can eliminate a $12.5-billion deficit in three years as promised. 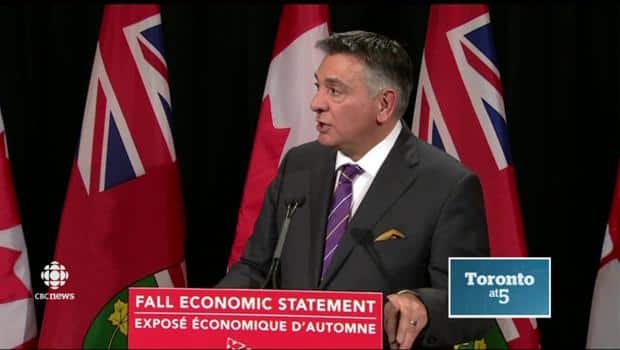 Ontario government revenues are down more than half a billion dollars, Finance Minister Charles Sousa said Monday, prompting the opposition parties to warn the Liberals will have to raise taxes to balance the books in three years.

In his fall economic update, Sousa said revenues are down $509 million from what was forecast in the budget, while the deficit remains at $12.5 billion this year, and is projected to be $8.9 billion next year, falling to $5.3 billion in 2016-17.

"The global economic environment remains challenging and has contributed to a slower pace of revenue growth," said Sousa. "However, there are positive signs that the economy is gaining momentum this year, supported by a resurgence in the United States."

Sousa also hinted the Liberals were prepared to raise taxes if necessary to help make sure the deficit is eliminated by 2017-18 as promised.

"Should revenues fall further, the government must consider other tools to balance the budget," he said.

The Progressive Conservatives called Sousa's fall economic update a "fiscal fairy tale," and predicted the Liberals would "absolutely" have to hike taxes to eliminate the deficit on schedule.

"Instead of tackling the real core problem, which is they spend too much, they'd rather look for nickels and dimes in the couch and look at how to dip their hand in your pocket even deeper," said PC finance critic Vic Fedeli. "The real solution is controlling spending."

Sousa did not announce any new tax measures or other major changes in the fall economic update, but said from now on any companies that want Ontario government contracts must prove their taxes are paid up to date.

He also promised a crackdown on contraband tobacco, corporate tax avoiders and cash transactions in the roofing sector and in auto body shops that are aimed at avoiding taxes.

"We have to address revenue leakage, because that's been part of the issue affecting us and why 2013 numbers were down," Sousa said. "So we're looking at the underground economy and ensuring that everyone pays their fair share."

Sousa said the province's efforts to "strengthen revenue integrity" brought in an extra $380 million in 2013-14, and could generate an additional $700 million over four years.

The New Democrats complained that the Liberals have been announcing similar crackdowns on illegal tobacco and the underground economy for years.

"It's like Groundhog Day on contraband tobacco," said NDP finance critic Catherine Fife. "This is clearly meant to be a distraction. The only thing leaking from this government is common sense."

Contraband tobacco, which accounts for up to 40 per cent of the cigarettes consumed in the province, is sold in bars and out of the trunks of cars for a fraction of the $85 average Ontario retail price for a carton of 200 cigarettes.

"Illegal tobacco has cost this government almost a billion dollars in lost revenue, so we are thankful that fairness in taxation is a priority in this statement," said association CEO Dave Bryans. "Retailers have noticed an overall reduction in customers who purchase taxed, regulated tobacco products from their stores."

Premier Kathleen Wynne declined to comment on why the Liberals have taken so long to make any headway on the contraband tobacco problem.