As longtime Ontario Finance Minister Dwight Duncan confirmed today he was leaving his post, the northern development minister announced he would not be seeking re-election in his Sudbury riding. 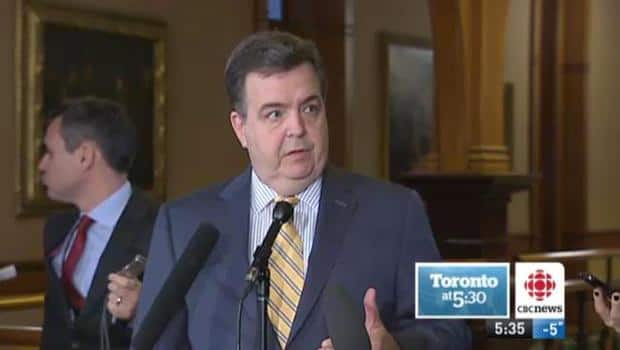 8 years ago
1:58
Finance Minister Dwight Duncan confirms he is stepping down as an MPP. 1:58

As longtime Ontario Finance Minister Dwight Duncan confirmed today he was leaving his post, the northern development minister announced he would not be seeking re-election in his Sudbury riding.

Duncan officially announced in a news conference Thursday he is resigning the seat he has held at Queen's Park for nearly 18 years, as of next week.

Duncan told reporters at the legislature Thursday, he hopes his resignation from his Windsor, Ont. seat can make way for incoming premier Kathleen Wynne to renew the Liberal government.

"Hopefully, people like myself stepping aside will give her an opportunity to build the coalition she needs to get a majority government back," he said.

Duncan, who is seeking a job on Toronto's Bay Street, said four months ago he planned to quit politics and made the news official in posts on Twitter and Facebook on Wednesday night.

In his tenure as finance minister, his chief accomplishments were helping to bail out the auto sector and the introduction of the HST.

He leaves the government with an $11.9-billion deficit and says his successor's biggest challenge will be getting the province back in the black.

"To get back to balance in the timelines we've laid out, there are still many difficult choices ahead," he said.

Shortly after Duncan's final news conference, Northern Development Minister Rick Bartolucci told reporters he would not seek re-election in his riding, but would not resign his seat.

He added that he would not be in Wynne's new cabinet when it's sworn in on Monday.

With files from the CBC's Mike Crawley and The Canadian Press