People across Ontario were jolted awake Sunday morning by an alert from the province about a nuclear power-plant incident at the Pickering Nuclear Generation Station.

‘You had the entire province waking up in fear,' one Twitter user wrote 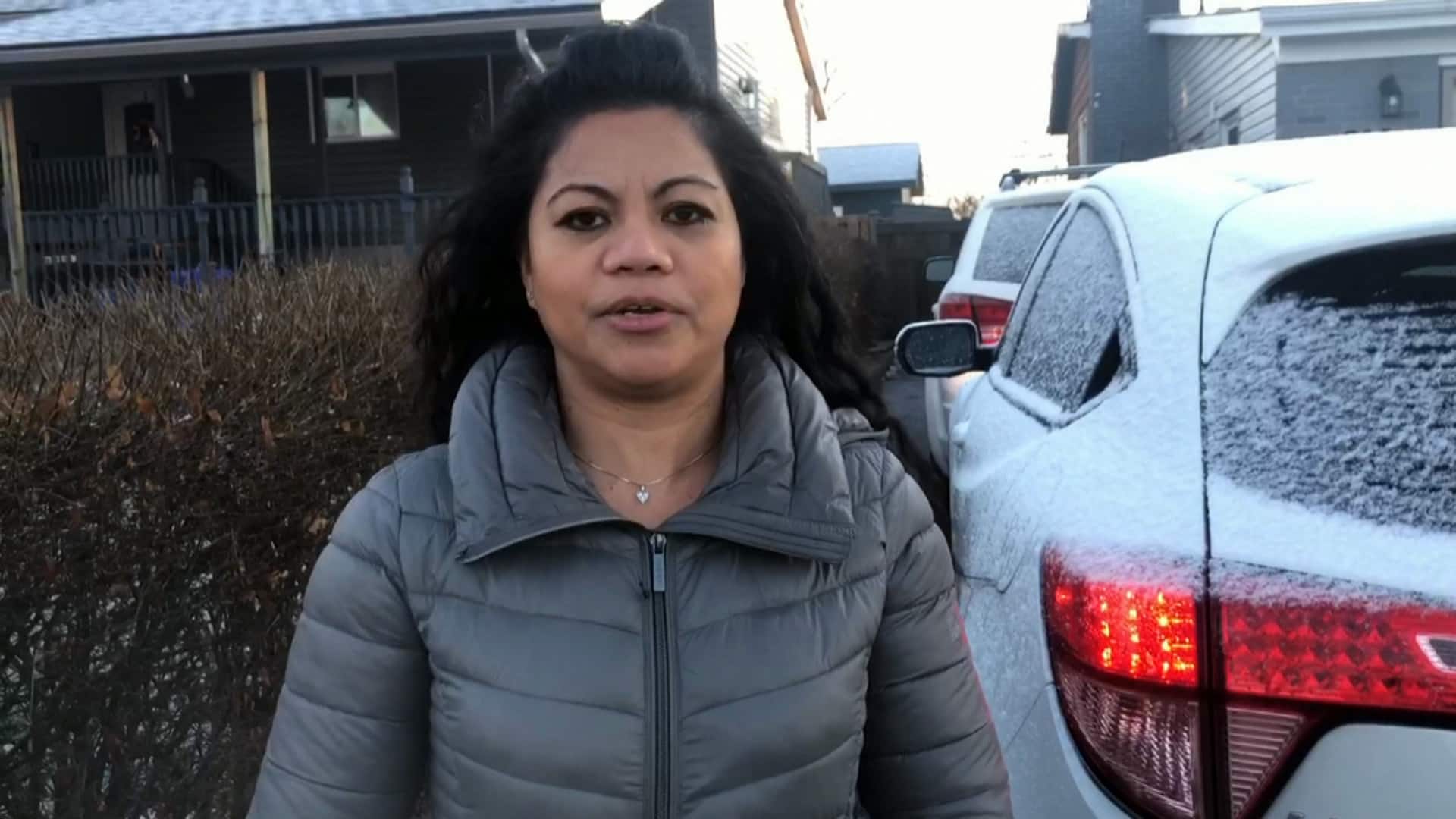 1 year agoVideo
1:09
Merinisa Natada of Pickering, Ont., scrambled for potassium iodide pills after getting the alert, while another resident, Heather Moss, said it was 'nonsense' to put people 'in a panic mode.' 1:09

People across Ontario were jolted awake Sunday morning by an alert from the province about a nuclear power-plant incident at the Pickering Nuclear Generation Station, east of Toronto.

The alert was issued provincewide at 7:24 a.m. ET. About an hour later, Ontario Power Generator, the plant's operator, tweeted without explanation that the warning "was sent in error."

Important update: the alert regarding <a href="https://twitter.com/hashtag/Pickering?src=hash&amp;ref_src=twsrc%5Etfw">#Pickering</a> Nuclear was sent in error. There is no danger to the public or environment.

"Someone needs to be held accountable for this," Andru Valpy wrote.

"This is a completely unacceptable use of the Emergency #Alert System. You had the entire province waking up in fear."

Another user, Alex, wrote: "Me and probably a couple million people almost had an aneurysm [because] of that msg."

Amber Waves wrote, "That's a really major error. People with anxiety disorders woke up to this and their health was impacted, never mind everyone else. Unacceptable. Was there an incident of any kind? Also a tweet isn't enough — not everyone who got the alert will see Twitter to know it's all OK."

One user posted a screen shot from the HBO miniseries Chernobyl, and there were several tweets referencing what happened in Hawaii when a police training exercise in January 2018 set off false hazard alarms on Oahu and Maui, resulting in major public panic.

'My main concern was our life'

Thomas Perez said he slept through the alert but was awakened by his wife who said there was a problem at the nuclear plant.

"As soon as she told me that, I told her 'Let's get into the car and get out of here.' That was my first reaction," Perez told CBC News.

"We woke up the kids, then I came and started heating up the car."

Even after receiving the notification that the alert was sent in error, Perez said he told his wife, "We'd better leave. It's better to listen the news when we are out, not when we are here, because everybody is going to try to leave at the same time and we are not going to be able to."

Perez said they had nothing packed when he got his family into the car. "My main concern was our life," he explained.

When they were in the car, a neighbour came by to assure the Perez family it was a false alarm.

"I was just scared that maybe something would explode and we might not be able to get out," said Perez's daughter Ainsley, 11.

It was kind of like a shock. You always think it will never happen.- Sophia Arrigo

Another resident, Sophia Arrigo, said she also did not wake up to the alert but woke up to her grandmother texting her about it.

"It was kind of like a shock. You always think it will never happen," she said.

"It was really kind of scary at first. I was like 'Oh God what do I do? I haven't packed anything … where am I going to go?'"

In the midst of the panic, Arrigo says her grandmother, who works at the plant, texted her back to say everything was OK.

"So I kind of just relaxed after that."

When Chuck Wurzer heard the noise on his phone, he thought it was another Amber Alert.

"I live close enough where I can look out my window and see the plant," said Wurzer, who has lived in the area for 20 years. "I opened up my window and looked outside [and] I didn't see any emergency vehicles or anything so I just assumed it was inaccurate and pretty much went back to bed."

Wurzer said mistakes like the one today could have a negative impact on the public's trust in the alert system.

"It kind of waives your confidence in the alert system that they can make mistakes like that to begin with and then send out to areas that aren't affected by it," Wurzer said.

Dan Croft, who grew up in the area, described this morning's alert as "a big time error," adding that he's at a loss as to how it could have happened.

"I was worried at first and, after, when they said it was a mistake I was kind of irritated because that's a big mistake to send out," Croft told CBC News.

"I grew up here so it's always a worry in my mind living around the nuke plant. You think the worst and hopefully good comes out of it."

Croft said he did not reach for his iodide pills — one of three protective measures against nuclear exposure listed by the City of Pickering on its website.

Potassium iodide pills prevent or reduce radioiodine absorption by the thyroid gland through the ingestion of a stable iodine compound, the city states.

"If something's going down on the nuclear, I don't know if an iodine pill is going to help you out really," Croft said.

"That's just their safety precaution. I didn't look for mine. I was actually thinking about packing up the kids and the animals [but] that's the worst case."

Debra Amos says she has the tablets at home, but she too didn't feel a need to reach for them.

"That plant's been down there forever and if anything was going to happen it would have happened a long time ago," she told CBC News.

Glen Tracy, who has lived in Pickering for 25 years, says this is the first time he's received an alert about an incident at the plant.

"I was surprised … it got me up in the morning. It's something I wasn't expecting," Tracy told CBC News.

"There's not much you can do about it anyway. I don't think there's anything you can do."

Erik Norvell said he was caught off guard, but did not panic too much.

"It was a bit confusing, I just wasn't expecting it," he told CBC News.

"I wasn't too worried. The way they worded it didn't seem like it was that big of an emergency."

Like Norvell, Wayne Stinson said he was not too concerned.

"I've lived beside this plant for 42 years and I've had no worries yet, so, I don't think there's too much going on," Stinson told CBC News.

"Everything is normal. I'm still alive. I'm not worried about that plant."

Pickering Mayor Dave Ryan has demanded a full investigation, adding that he was "upset" that the error occurred.

"Like many of you, I was very troubled to have received that emergency alert this morning," Ryan wrote on Twitter.

"While I am relieved that there was no actual emergency, I am upset that an error such as this occurred. I have spoken to the province, and am demanding that a full investigation take place."

I join Pickering <a href="https://twitter.com/mayordaveryan?ref_src=twsrc%5Etfw">@MayorDaveRyan</a> in calling for a full investigation into why this error occurred because there are far too many unanswered questions.

Toronto Mayor John Tory has also responded to the false alert, calling for a full investigation.

"We still don't know what the mistake was. Was the mistake that there was some incident that happened that wasn't an emergency? Was it a mistake in pushing the button as it were?

"I think there are just so many questions that require a complete investigation here," Tory told CBC News.

Like many of you, I was very troubled to have received that emergency alert this morning. While I am relieved that there was no actual emergency, I am upset that an error such as this occurred. I have spoken to the Province, and am demanding that a full investigation take place.

Solicitor General Sylvia Jones has since issued a statement saying the alert was issued in error to the public during a routine training exercise being conducted by the Provincial Emergency Operations Centre (PEOC).

"There was no incident at the Pickering Nuclear Generating Station that should have triggered public notification. Nor was there ever any danger to the public or environment," Jones wrote.

The Pickering station has been operating since 1971, and had been scheduled to be decommissioned this year, but the former Liberal government — and the current Progressive Conservative government — committed to keeping it open until 2024. Decommissioning is now set to start in 2028.

It operates six CANDU reactors, generates 14 per cent of Ontario's electricity, is responsible for 4,500 jobs across the region and is one of the largest nuclear generating stations in the world, according to OPG.

Whitby resident Viral Patel said he was in the area visiting friends and decided to stop by the plant after he got the notification that the alert was sent in error.

"I'm skeptical," Patel said, adding that based on his own tests with his personal radiation detector, there were no unusual readings.

With files from Lisa Xing, Angelina King and The Canadian Press