Ontario's governing Liberals will allow police to expand the use of Tasers in the wake of last month's fatal shooting of teenager Sammy Yatim aboard a Toronto streetcar. 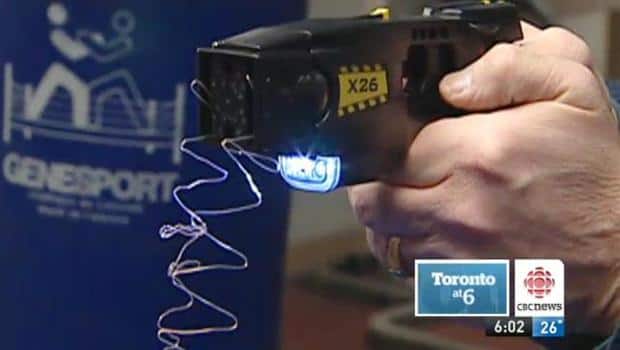 8 years ago
3:32
Ontario’s governing Liberals will allow police to expand the use of stun guns in the wake of last month’s fatal shooting of teenager Sammy Yatim aboard a Toronto streetcar. 3:32

Ontario’s governing Liberals will allow police to expand the use of stun guns in the wake of last month’s fatal shooting of teenager Sammy Yatim aboard a Toronto streetcar.

Ontario Community Safety Minister Madeleine Meilleur made the announcement Tuesday, exactly one month after Yatim, 18, was shot multiple times and stunned with a Taser by police during a confrontation on an empty streetcar.

Meilleur said existing rules that limit the use of Tasers, also known as stun guns or conductive energy weapons (CEWs), will be changed to clear the way for individual police forces to set their own guidelines about which officers can use them.

Prior to Tuesday's announcement, Ontario had restricted the use of stun guns to a select few supervising and tactical officers, setting Ontario police apart from counterparts in several other provinces and with the RCMP.

Police chiefs have been advocating for the expanded use of stun guns for years.

'The right decision to make'

Meilleur said the move will widen the use-of-force options available to police.

"This is the right decision to make and will increase community safety by preventing injury and death," she said.

She also said the decision to expand stun gun use is based on research, stakeholder input and past inquests by coroners, and added that the province will keep a "watchful eye" on how stun guns are used by police.

Meilleur said the Yatim shooting did not play a role in Tuesday's decision, saying it had been in the works for months.

She also said each time a police officer uses a stun gun, it will be recorded and reviewed.

Federico said that stun guns are "one part of an overall response that police officers can bring to a situation," but they are not a solution to the mental-health issues that police frequently deal with.

Toronto police received 20,000 calls in both 2011 and 2012 that involved with people who were believed to be either experiencing an emotional disturbance or suffering from a mental disorder, Federico said.

Police end up apprehending about 8,500 individuals in these cases each year.

"That's 8,500 events where we believe somebody was significantly distressed or disturbed to require a referral to a psychiatric facility," he said.

"It's a sizable problem in Canadian society and relying on the police to deal with it is going to result in, at best, a Band-Aid kind of solution and at worst, an inevitable tragic outcome."

OPP Deputy Commissioner Vince Hawkes said that if officers have a Taser at their disposal, it gives them an opportunity to avoid using direct lethal force in some cases.

"I'm convinced that this is a valuable tool for officers to be able to utilize and potentially we could save lives," Hawkes said on CBC Radio's Metro Morning, ahead of the Tuesday morning announcement from the government.

Responding to Tuesday's announcement, the Canadian Civil Liberties Association said expanding stun gun use is not the right approach. The CCLA says there should instead be more police training on de-escalation techniques and how best to deal with emotionally disturbed people.

Ontario's ombudsman has launched his own probe into the Yatim shooting, to determine the kind of direction the provincial government provides to police for defusing conflict situations.

Retired justice Dennis O'Connor has been asked by Toronto police Chief Bill Blair to lead a separate review of police procedures, use of force and police response when dealing with emotionally disturbed people.