'We have taken back Ontario': Doug Ford leads PCs to majority government

Andrea Horwath's NDP will form the Official Opposition at the legislature, while the embattled Liberals suffered a historic rebuke from voters. The Grits lost the vast majority of their seats at Queen's Park and earned their lowest-ever share of the popular vote.

Shortly after results were announced, Kathleen Wynne revealed she will resign as Liberal leader, as her party failed to pick up the eight seats necessary to maintain official party status.

Buoyed by Ford — a one-term Toronto city councillor and businessman — the PCs ran a populist campaign long on commitments but short on fiscal details, promising a tax cut for the middle class and corporations and a drastic reduction in the price of hydro and gasoline.

The PCs were the only party that did not release a fully costed platform prior to election day.

Riding a wave of entrenched anti-Liberal sentiment, the Tories managed to win 76 seats, up from the 27 they held when the campaign kicked off in May.

"I promised to deliver a strong, stable majority government and together we did that. Together we made history. We have taken back Ontario, we have delivered a government that is for the people," he continued.

"A new day has dawned in Ontario — a day of opportunity, a day of prosperity and a day of growth." 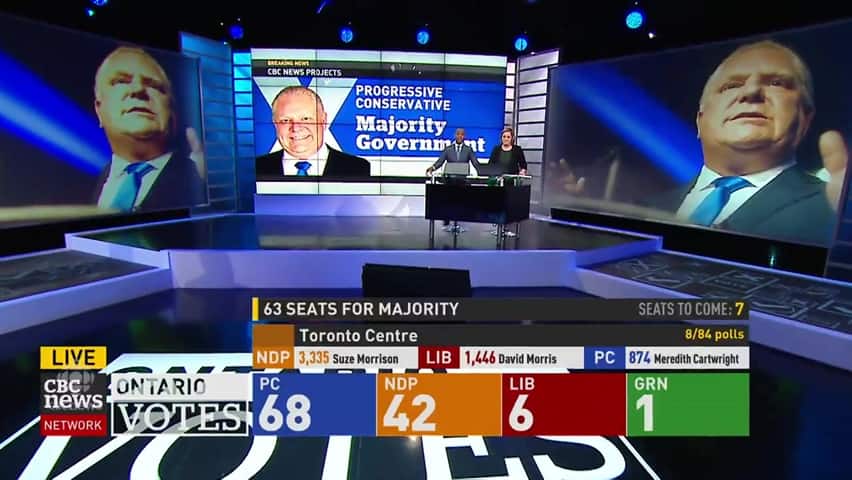 With all polls reporting, voter turnout was about 58 per cent, the strongest showing in the province since 1999.

Ford easily won his seat in Etobicoke North, the symbolic heartland of "Ford Nation," the term given to an unwavering core of supporters, many of whom also backed his late brother, former Toronto mayor Rob Ford.

In his victory speech, Ford became emotional as he thanked his brother.

"I know my brother Rob is looking down from heaven. I'm just getting chills talking about him right now. I know Rob is celebrating with us tonight. We owe so much to Rob's legacy," Ford said.

The PCs made significant gains in the 905 and throughout the Greater Toronto Area, regions that are critical to the political landscape in Ontario because the number of seats that are concentrated within them.

"Tonight we have a sent a clear message to the world: Ontario is open for business," Ford said in his address.

As was expected, Horwath held onto her seat in Hamilton Centre, where she has served as an MPP since 2004. Heading into election day, polls suggested that the NDP had a slim chance of eking out a win. While such an improbable scenario never materialized, the New Democrats managed to take 40 seats, up from the 18 they held when the campaign began. 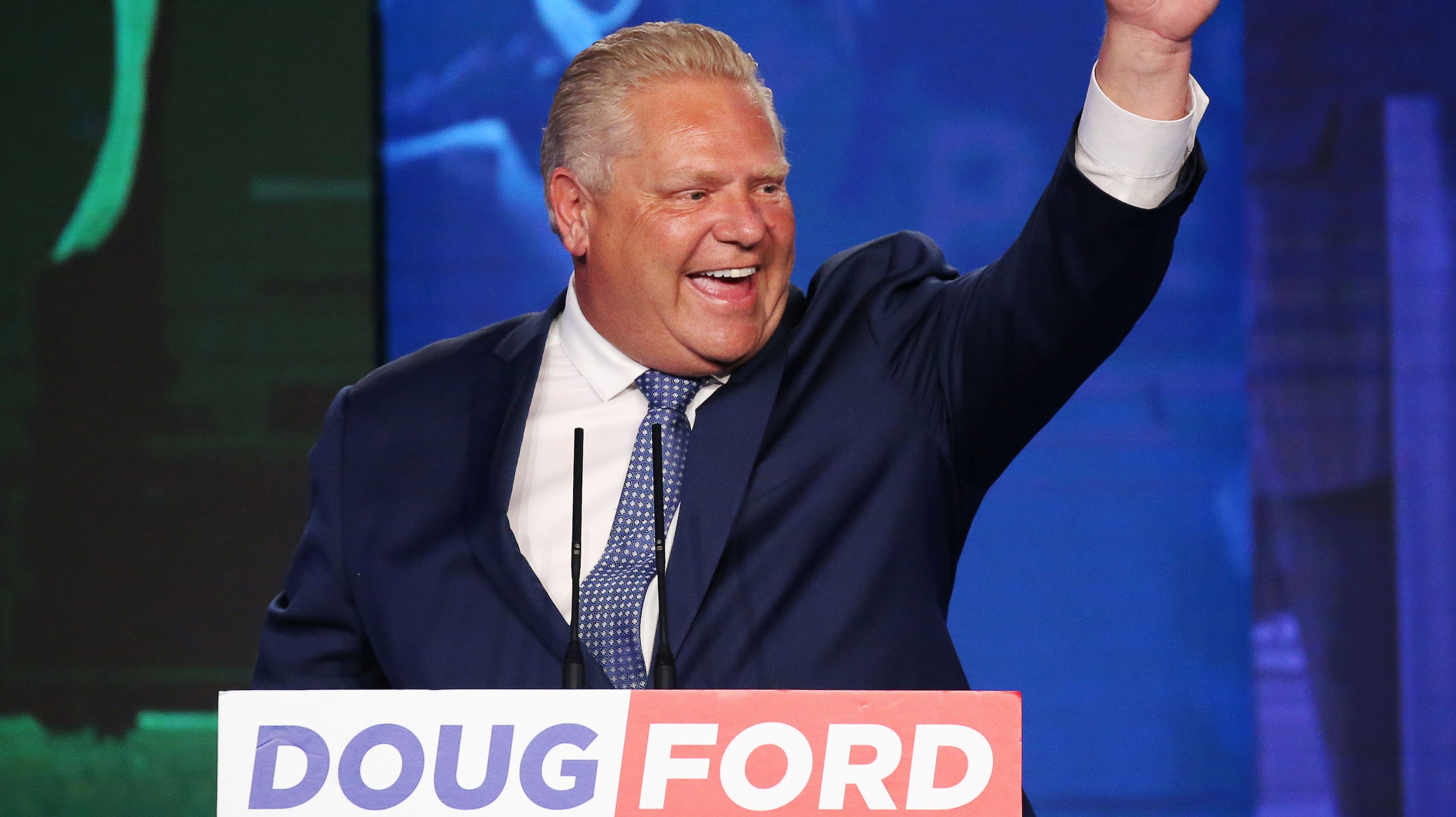 2 years ago
0:46
PC Leader Doug Ford addresses crowd at his headquarters in Etobicoke on election night. 0:46

"I could not be more proud that we offered a positive vision: change for the better. New Democrats rejected the politics of fear and cynicism, and we put hope and vision for a better future at the heart of our campaign," Horwath told supporters in Hamilton.

"Together, we won more seats than we have held in a generation. And I am deeply humbled that Ontarians have asked us to serve as the new Official Opposition."

The election results represent a marked turnaround for the NDP, a party that has consistently found itself in third place since Bob Rae's government was defeated in 1995. 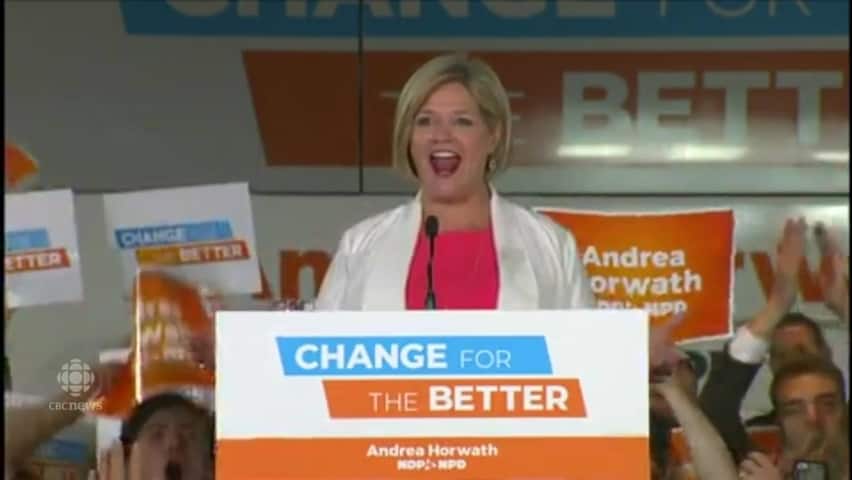 Wynne, Ontario's first female and openly LGBT premier, was re-elected in Don Valley West, though the race was much tighter than it has been in previous years.

However her incumbent Liberals, who had enjoyed a majority since 2014, suffered a stunning collapse. The party only managed to secure seven seats, which means they have lost official party status in the Legislature. They were also nearly wiped off the political map in Toronto, an area that was key to their majority.

The trouncing was foreshadowed last weekend, when Wynne took the extraordinary step of admitting publicly that she would not be Ontario's premier after the vote. With defeat imminent, she encouraged voters to elect Liberals to ensure the next government is kept "in check."

She struck a tone of gratitude in her last major address at the helm of the Liberal party.

"This is not a concession speech — I conceded days ago. This is my chance to say thank you for allowing me to be premier, allowing me to connect with so many of you the last five years" Wynne told supporters on Thursday night. 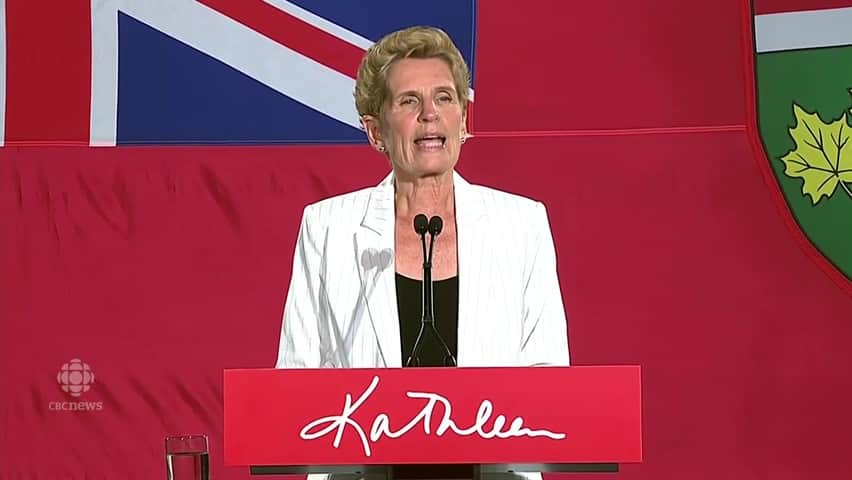 2 years ago
0:30
Kathleen Wynne announces she has resigned as Ontario Liberal Leader. 0:30

She then announced that she will resign as leader.

"There is another generation, and I am passing the torch to that generation," Wynne said as she fought back tears.

"I know that tonight is not the result we were looking for and no one feels that more sharply than I do, but this is not a moment where any of us should linger. We can't stay here," she continued.

"I hope that you can feel very proud of what we have done together in the past and absolutely determined to take on the task that lies ahead."

The PCs' election victory comes after a memorable and at-times vicious campaign that pitted the Tories against the NDP. The month-long slog proved difficult for Ford and some of his candidates — what began as a commanding lead in public opinion polls steadily narrowed over the campaign.

Ford, unaccustomed to the scrutiny that a provincial campaign draws, faced down multiple controversies and alleged scandals. One his former candidates was forced to resign over his alleged links to a data breach at the company who operates Ontario's Highway 407.

And three days before the election, the widow of his late brother, former Toronto mayor Rob Ford, sued the Tory leader. The suit claims Ford withheld money from her and her two children, and that Ford's Toronto- and Chicago-based businesses are bleeding money.

Under Ford, the PCs recaptured the province they have not led since 2003, overcoming the failings of the past three elections that saw them unable to defeat the Liberals. In some cases those campaigns were sunk before they barely got off the ground with promises to fund religious schools or cut 100,000 public sector jobs.

Ford took the reins of the party less than three months ago, winning the leadership race on the third ballot after former leader Patrick Brown abruptly resigned.