York Region will join Toronto, Peel and Ottawa in moving into a modified version Stage 2 as it deals with a surge in new COVID-19 cases, Premier Doug Ford said Friday.

York Region will join Toronto, Peel and Ottawa in moving into a modified version Stage 2 as it deals with a surge in new COVID-19 cases, Premier Doug Ford said Friday.

The change will take effect at 12:01 a.m. Monday and stay in place for at least 28 days, he said at his daily news conference.

That means that gyms, indoor dining rooms and movie theatres will be closed in the region, which includes Markham, Vaughan and Richmond Hill. But schools, child care centres and places of worship will remain open and must continue following the public health measures in place.

On Thursday, Ford said York Region has been "teetering for a while," and that the province is keeping a close eye on the region, calling its numbers "concerning."

But he said the decision was a difficult one to make, given the potential consequences for local businesses.

"I hate doing this," he said. "We just have to stop the spread." 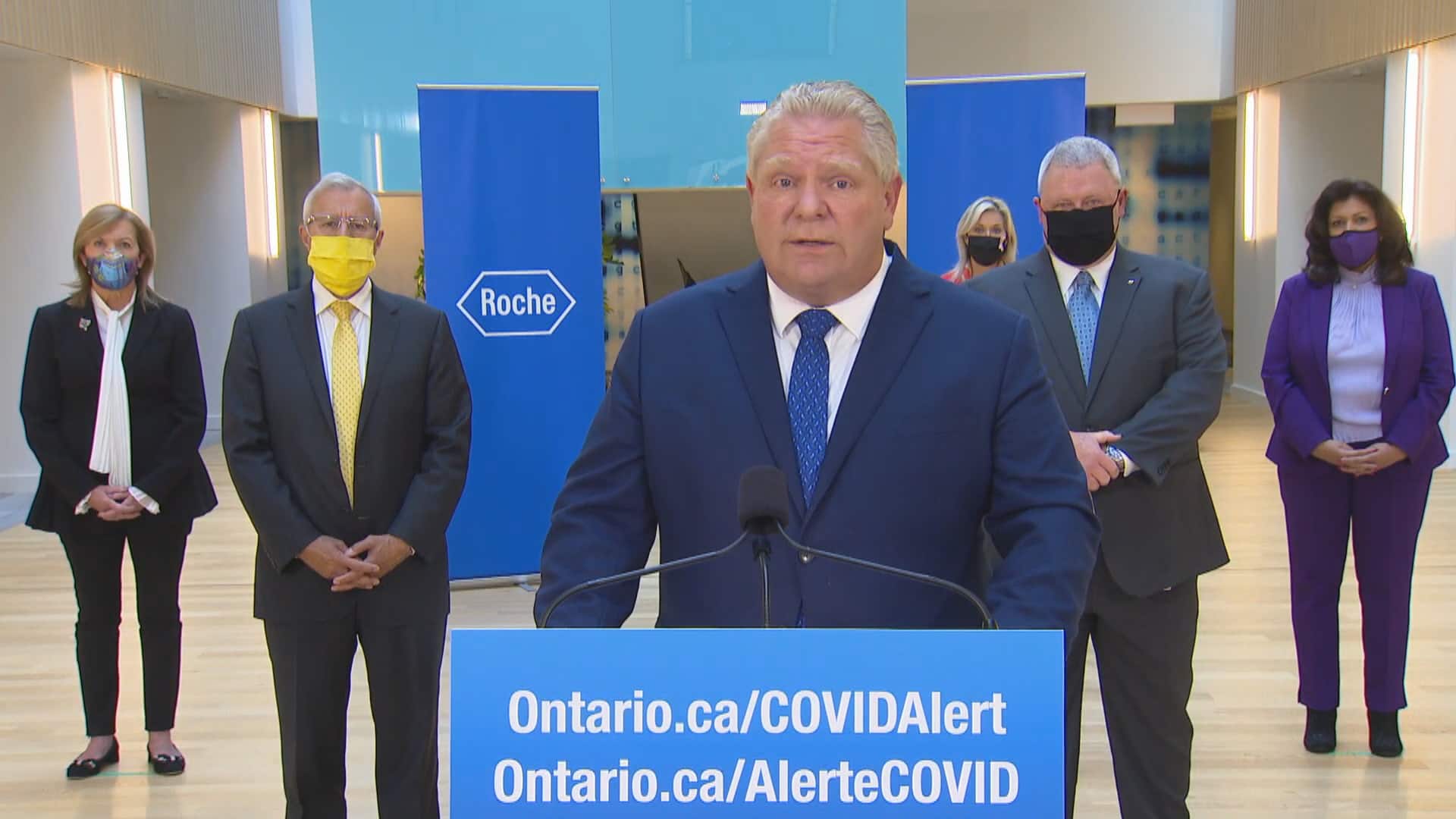 4 days ago
1:44
On Friday, Premier Doug Ford announced that York Region will join Toronto, Peel and Ottawa in moving into a modified version Stage 2 as it deals with a surge in new COVID-19 cases. The change will take effect at 12:01 a.m. on Oct. 19 and stay in place for at least 28 days. 1:44

In addition, the number of COVID-19 hospitalizations in the region has doubled over the past week.

The region also saw an increase in its testing positivity rate to 2.77 per cent, which is above the "high alert" threshold of 2.5 per cent.

Meanwhile, Ontario reported another 712 cases of COVID-19 on Friday as the number of people in Ontario hospitals with confirmed cases of the illness continued its slow but steady climb.

Trends in the 'wrong direction'

Health Minister Christine Elliott said that the current trends in the area are "concerning" and that they "required us to take action."

"The trends we've seen in York Region are in the wrong direction," Elliott said. "Numbers have jumped and we need to do everything we can to avoid a very severe second wave."

"While this is not the news any of us wanted to hear, it is a grim reminder the virus is still a threat to the 1.2 million people who call York Region home," the pair said in the statement.

"It also serves as a signal we all must continue taking steps to keep each other, our families and our communities safe.

4 days ago
3:46
York Region moving to modified Stage 2 of COVID-19 restrictions was a decision made after seeing concerning trends and looking at multiple indicators, including community transmission, says Ontario Health Minister Christine Elliott. 3:46

Both the premier and health minister also issued a plea to those living in Halton Region, which has also seen recent increases in new daily cases, to keep following public health guidelines to prevent similar action there.

The daily number of infections remained above the 700 mark all this week, with 807 cases on Monday, 746 on Tuesday, and 721 on Wednesday.

The largest number in today's update  — 213 cases — was reported in Toronto, followed by Peel with 135 cases, Ottawa with 108 cases and York Region with 62.

After steadily increasing for more than a week, the seven-day average of new daily cases dropped for a second straight day, and it now sits at about 746.

There are 713 more resolved cases taking the provincial total to 54,004 recovered patients.

Meanwhile, there are 261 people hospitalized as a result of COVID-19. Of this number 67 people are in intensive care units across the province, 36 of them on a ventilator.

Meanwhile, as of today, residents of long-term care homes in three regions where cases have been surging are not allowed to go out for social or personal reasons.

The new restrictions will apply to long-term care homes in Toronto, Peel Region and Ottawa, and will remain in place until further notice.

On Friday, Prime Minister Justin Trudeau said federal contact tracers are ready to help chase down people who might have been exposed to COVID-19.

He says they can make up to 14,000 calls a day, at the request of the provinces and territories.

Quickly following up with people who have been close to someone who tests positive for the illness is seen as essential to containing its spread.

Some jurisdictions, including Toronto, have limited the number of people they will try to reach as new cases have cropped up faster than contact tracers can work.

On Friday the province announced it continues to work with businesses and the manufacturing sector to expand production of domestic PPE to ensure preparedness, both now and for the future.

To support the fight against COVID-19, Greenfield Global is investing a total of $75 million at their facility in Johnstown Ontario to produce the medical-grade alcohol critical to making hand sanitizers used by Ontario individuals, families, and front-line workers.

The Ontario government is investing $2.5 million through the Ontario Together Fund in support of this project.

The announcement was made today by MPP Steve Clark and Minister of Municipal Affairs and Housing on behalf of Vic Fedeli, Minister of Economic Development, Job Creation and Trade.

"By working together with these innovative businesses, we are ensuring we are well-prepared for the future as we continue our fight against COVID-19," Fedeli said.

With files from Desmond Brown, Sara Jabakhanji and The Canadian Press