Premier Doug Ford is maintaining that Ontario teachers are being "fairly compensated" amid questions over continued calls for better protections against COVID-19 in schools as the province marked 132 new cases Thursday — it's eighth straight day in the triple digits.

"I think the world of our teachers," Ford said at a news conference Thursday, drawing a distinction between teachers themselves and their unions, which he has repeatedly dismissed as playing politics.

"I could not do what the teachers do. They're incredible," the premier said.

Ford was also asked if he would use legislation to prevent teachers who do not feel safe at their workplaces from refusing work.

"I just want to work with them ... this just isn't the time to argue or disagree," Ford said.

Also Thursday, the federal and provincial governments announced a one-year $147 million bilateral agreement to invest in early learning and child care, which will be used to minimize the impacts of COVID-19.

"In particular, the province will help fund the operating costs of eligible licensed child-care providers and EarlyON centres," the governments said in a news release.

The move will result in more child-care spaces and help to offset costs associated with the pandemic, said Ahmed Hussen, the minister of families, children and social development.

During the news conference, Ontario Education Minister Stephen Lecce was asked about the fact that only about 60 per cent of child-care centres have so far reopened with the start of school just days away.

Lecce didn't provide specifics but argued the government has given "every incentive" for operators to reopen and that they will do so when it is safe. 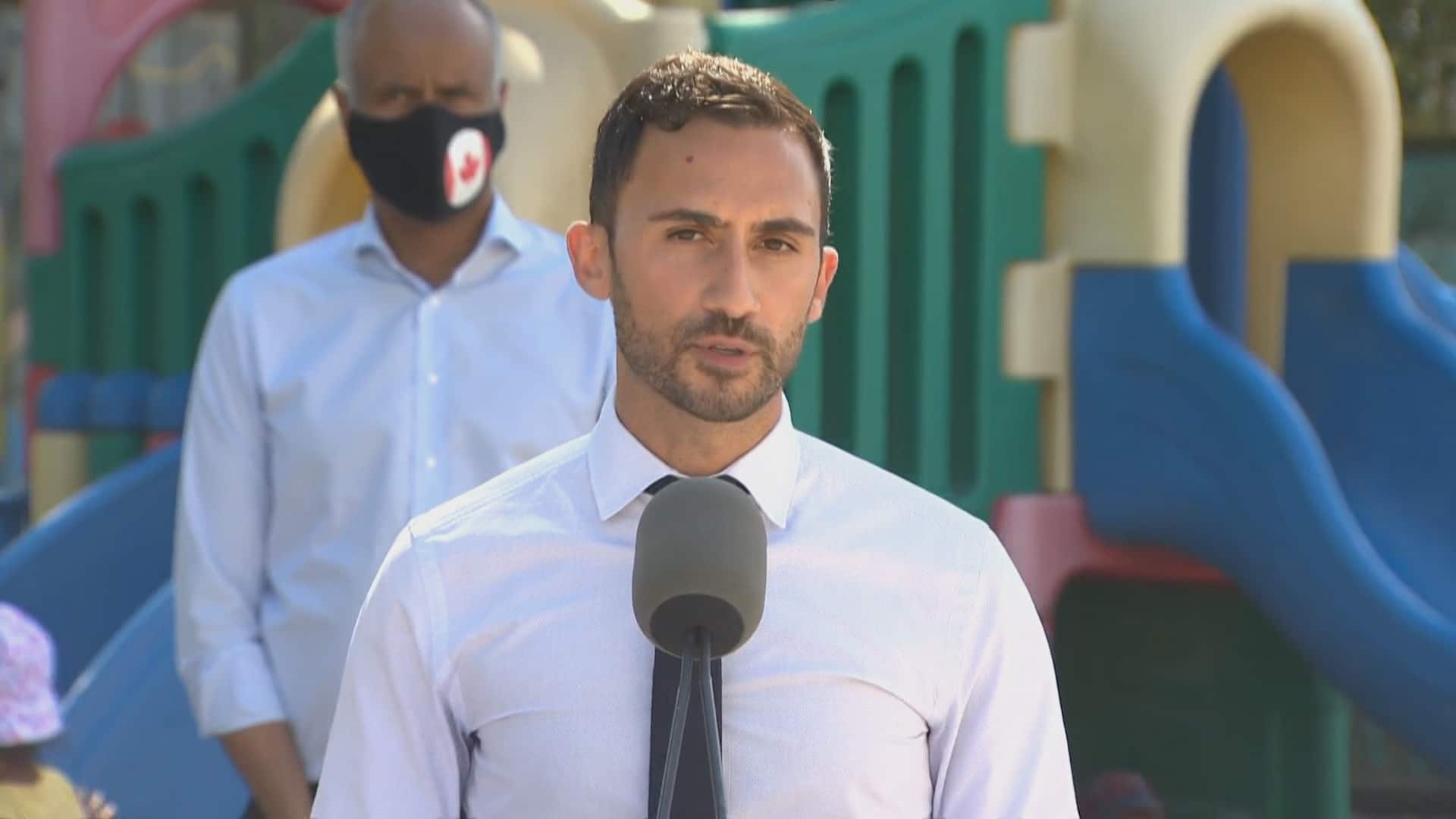 2 months ago
1:50
Education Minister Stephen Lecce expects the number of child care spaces to rise back to its pre-COVID-19 levels. 1:50

Aside from those three regions, the rest of the province's 34 public health units reported five or fewer cases. Of those 31 units, 18 confirmed no new cases at all.

During a news conference Thursday, Ontario's top doctor was asked about the relative increase in the proportion of cases without any identifiable epidemiological link — that is, where officials haven't identified the source of the infection.

Asked if that increase from 36 per cent of cases a few weeks ago to 43 per cent now means there is greater evidence of community spread, Dr. David Williams responded, "We're looking into that to understand why that is the case."

He also reiterated some of the recent outbreaks are tied to clusters of infections at workplaces and gatherings of large groups, which are happening against public health advice. Williams cited one case in Peel where a church went from seven cases to 17 cases "overnight."

An additional 119 cases of the virus were reported as resolved on Thursday, bringing the total to 38,625. Currently, 90.4 per cent of the province's cases have been confirmed as resolved.

Ontario also marked its third day of no additional deaths from the infectious disease. The number of patients admitted to the hospital and on a ventilator remains the same as yesterday, with one fewer person in the ICU.

All of the figures in this story can be found in the Ministry of Health's daily update, which includes data up until 4 p.m. the previous day. The number of cases for any particular region on a given day may differ from what is reported by the local public health unit.

Meanwhile, the leaders of the two provinces hit hardest by COVID-19 are due to meet during a two-day summit next week to discuss how they can work together to rebuild their economies while preparing for a possible second wave of the novel coronavirus.

Ford will host Quebec Premier Francois Legault on Sept. 8 and 9 in Mississauga.

Ford says that as Canada's two largest provinces — and the "economic heart" of the country — it's important that Ontario and Quebec collaborate.

"While the path to economic recovery won't be easy, we don't have to go it alone," Ford said in a statement announcing the summit. "Our provinces must now work together at this critical juncture to help drive the country forward."

Legault noted that the provinces must also prepare for the spread of COVID-19 to pick back up in the fall and winter — cold and flu season.

"We have a lot to learn from each other and collaboration between our governments will remain critical as we strive to recover our economies safely while preparing ourselves for a potential second wave," he said in the statement.

Prominent cabinet members from both governments, including health, economy and finance ministers, will also take part in multiple meetings during the event.

The Ontario government is resuming its G-class road test services after putting them on hold during the COVID-19 shutdown.

The province said in a news release that tests will be accompanied by "strict protocols" to prevent any further spread of the virus, but individuals will be able to access all classes of driver testing services at the DriveTest locations across Ontario.

They also announced DriveTest centres, which operate on a full-time basis, will be offering all of their services again without any restrictions that were previously imposed in the spring during the shutdown.

Individuals taking a test will be required to wear a face covering while staff will wear personal protective equipment in both the building and in vehicles.

With files from Ania Bessonov, The Canadian Press