Ontario budget to be tabled May 1, could trigger election

Ontario's governing Liberals will table their budget May 1, an event that could trigger a quick trip to the polls if both of the opposition parties fail to support its contents. 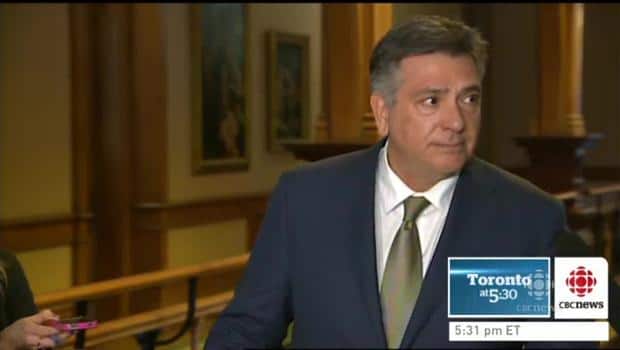 Ontario’s governing Liberals will table their budget May 1, an event that could trigger a quick trip to the polls if both of the opposition parties fail to support its contents.

The Liberals have held a minority position in the Ontario legislature for the past 2½ years, but have managed to survive the past two budgets with the support of the New Democrats.

But two weeks ahead of the budget, NDP House Leader Gilles Bisson said it was too soon to say if his party would be in a position to support what the Liberals would bring forward.

"It's not responsible for us as a party — and I don't think it's responsible for anybody else — to say we're going to do X, Y or Z without seeing what's in it and without really taking a look at what the options are," Bisson said.

The Progressive Conservatives have voted against each of the past two budgets and do not appear to have any different plans this time around.

The budget’s timing is not a surprise, as the PCs previously announced that they had obtained documents pointing to a May 1 delivery date for the budget.

Ontario PC Leader Tim Hudak then accused the Liberals of having a "budget-leaking team," which would strategically leak elements of the pending budget ahead of May 1.

On Tuesday afternoon, Finance Minister Charles Sousa announced that the budget would be tabled on that date and alluded to the "speculation" as to when it would be delivered.

"I know that you’ve all been waiting with bated breath and I’m going to shock you today, by telling you that the date has been established as May 1," he said.

Sousa also said it was coincidence that he announced the timing of the budget at the same time that a top civil servant was testifying in front of a committee that has been examining issues related to the gas plant scandal.

The Tories' leaked documents had said that the budget announcement was supposed to have been rolled out in the morning.

"This is obviously designed to distract from a potentially explosive day at the gas plant hearing," said Tory finance critic Vic Fedeli.

If the Liberals fail to get the support they need for the budget, an election could come as soon as the end of June — or even sooner if the government decided to drop the writ sooner.

Sousa said the timing of the vote on the budget will be dependent on various factors, including the debate that will take place in the Legislature.

The coming budget will be the second for Premier Kathleen Wynne, who took the reins of the Ontario Liberal Party just over a year ago.

In recent days, the Liberals have been dropping hints about what their budget will look like.

On Monday, Wynne pledged to spend $29 billion on transit and transportation infrastructure projects over the next decade. Just over half of that money would be spent in the Toronto and Hamilton areas, while the rest of that spending would target projects in other parts of Ontario.

How the Liberals will fund such investments has only been partially disclosed. Wynne has said the government would earmark a portion of the gas tax for such projects and would take on more debt. But the premier said more details would come in the budget.

At present, the Liberals hold 48 seats in the 107-seat legislature. The PCs have 37 seats and the New Democrats have 21 seats.

One seat remains vacant, following the departure of Linda Jeffrey, a Liberal cabinet minister who left the legislature to pursue a bid to become the next mayor of Brampton. Her exit from the government prompted a shuffle that saw Wynne bring two rookie ministers into her cabinet.

Over the past year or so, the Liberals have seen a growing number of members leave the Legislature. That group has included former cabinet ministers Dwight Duncan, Chris Bentley, Laurel Broten, Margarett Best, as well as the former premier, Dalton McGuinty. Veteran Liberal MPP Kim Craitor retired from politics last fall.