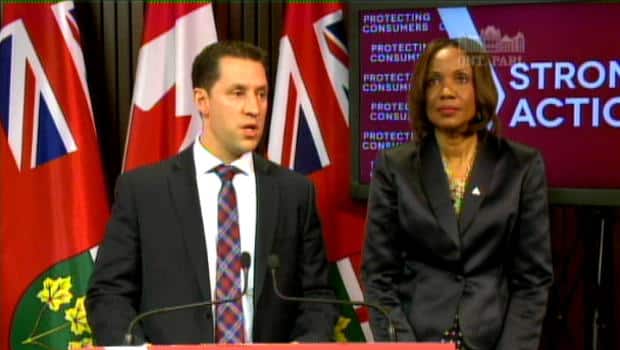 Too many Ontarians are being hit with unexpected charges on their cellphone and smart phone bills, Consumer Services Minister Margarett Best said Thursday as she promised new legislation to govern wireless service contracts.

The issue is consistently among the top 10 consumer complaints to her ministry, Best told reporters.

"One common problem we are responding to is the cell shock that many consumers experience upon opening their monthly bill," she said.

"The cell shock results from consumers being surprised for charges on services they were not aware they would be charged for or services they did not know would cost extra."

The proposed legislation will require:

"There is a need to provide additional protection for consumers in their agreements with (wireless) service providers," she said.

"Our government's goal is to provide greater clarity and fairness for Ontario's consumers with respect to cellphone agreements," Best said.

"The cancellation fees are grossly excessive, the automatic renewal features that are imposed on consumers are unfair and biased," said Liberal backbencher David Orazietti, who sponsored previous bills trying to rein in cellphone charges.

"It's important to ensure that consumers know what the full price of getting into a contract will mean," he said.

"The advertising aspect needs to include the highest, most prominent price, that's got to be the most visible for consumers to understand the true cost of entering into these contracts."

The bill would also require service providers to notify consumers when they are about to exceed the minutes in their contract before they rack up extra charges.

Orazietti said the federal government isn't taking steps to ensure there's real competition among wireless providers in Canada, so provinces like Ontario and Quebec are trying to do what they can to protect consumers.

"I say to the federal government the voluntary code of conduct is a farce, it's insulting to consumers and it does not address the competition issue and the costs that consumers need to bear," he said.

"It gets back to a belief federally that there's adequate competition. Clearly there's not."

Ontario and Quebec are introducing legislation "where they have the Constitutional and legal authority to do so, which is around the (wireless) contracts," said Orazietti.

"I would suspect other provinces will follow suit and there will be an appetite in other provinces to take similar measures given the steps that Quebec has taken and that we're taking."

There is no word when the Ontario Liberal government plans to introduce the bill in the legislature.